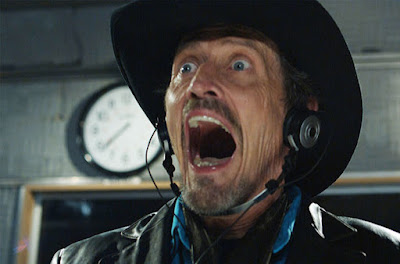 A gruff tenor in a cowboy hat, Grant Mazzy is having none of your zombie shit.

Trapped in Canada’s endless winter, he drives through the dark morning snow alone. Listening to himself on the radio, he yells at his agent on the phone, fires the guy, and tosses his phone aside.

Grant Mazzy is a man no longer on his A-game. And he knows it.

With an air of someone who was once hot shit, Mr. Mazzy seems to struggle with his new heaping helping of small potatoes. Recently fired from a previous gig, the once revered shock jock is king no longer, instead he works in the small Canadian town of Pontypool. And this cozy town is not exactly in need of an acerbic deejay who “tells it like it is.” Unfortunately, this is Mazzy’s specialty. Cocky and gruff, Stephen McHattie delivers the type of character you can almost smell—aftershave, single malt scotch, and that woodsy staleness exuded by men of a certain age. He’s angry, a little dismissive, and all kinds of entertaining—commanding our attention in a film that uses an insulated, more theatrical structure than your typical movie of the zombie persuasion. It’s definitely a slowburn, but Stephen McHattie plays each and every corner of Pontypool’s one room set like the Muhammad Ali of emoting. 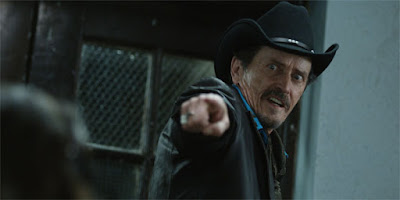 Pontypool is a small budget flick with absolutely nothing small about it. The movie works as sort of a mirror image of a zombie outbreak—focusing on what goes on inside the frantic TV/Radio report featured in almost every single movie of this kind. It leaves a lot more to the imagination and plays hard into the anxiety of “what’s behind the closet door?” (The answer, of course, is infected quasi-zombies suffering from echolalia and a desire to suicide themselves into your mouths. This joint is super original). What the movie lacks in physical space, it makes up for tenfold in emotion. McHattie’s performance transforms the basement sound studio into an intimate little island where we can marinate in his feelings of anger, confusion, and, later, terror.

The slickest thing about Pontypool is just how much Grant Mazzy’s voice tells us about the inner workings of the plot—which seems sort of like a “duh” comment, but hear me out: when I went to rewatch the film I was a little slammed with work, so instead I just listened. It’s pretty incredible just how well it holds up without any visual support—in fact I almost preferred it. Peppered in with stories of missing cats, Grant Mazzy’s bitter trolling of his listeners, and school closings, the story of the speech-transmitted virus begins to unfold, all in Mazzy’s fuck-you tenor. From the beginning, the movie layers what is seemingly pre-recorded filler broadcasts, but upon further listening, the clips are actually on a loop—reflecting almost exactly how the virus works as well as directly speaking to the post-virus state of Pontypool. Seriously, this is like the Primer of zombie movies. 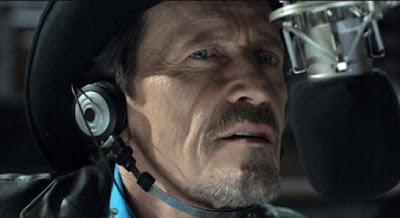 Where sometimes it feels that films are held back by budget, in the case of Pontypool, it really lets McHattie shine and makes for a much creepier movie. We’re forced to consider what is going on outside of the studio, reacting to Grant Mazzy’s processing of the nightmare going on around him. Thus, the gory moments have so much more staying power. It’s hard not to separate talking about Pontypool as a whole from Stephen McHattie’s performance, because the two don’t exist separately in my mind. It isn’t like a movie where any Actor McHollywood can play the lead—instead it feels like the movie and the lead actor were grown together in a lab and are impossible to pull apart.