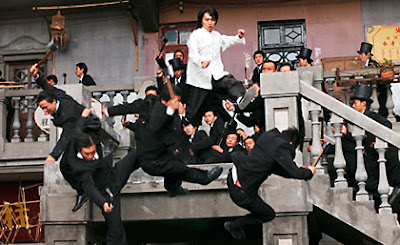 I was recently in a conversation about what things in movies always work for us no matter in what movie we see them.

I mentioned something silly like British accents, sci-fi, badass heroines, and the poor schlub that gets beaten up the most in a group fight compared to the other nameless thugs, which always invokes my excitement and my sympathy simultaneously. My list could have gone on much longer, but Kung Fu Hustle (2004) looms large in the memory for having so many things I love. 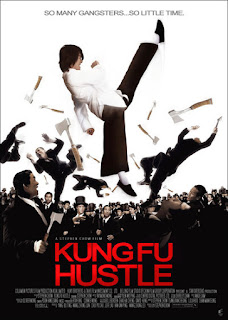 One aspect I love is that the movie feels like a passion project for director/writer/producer/star Stephen Chow, which is maybe why he wears all of those hats, although Hong Kong’s ramped up production practices might be part of it too. It’s difficult to miss Chow’s penchant for mixing up genres, combining parts of martial arts action, gangster movies, and slapstick comedy; he does this type of mixing often in his filmography. It feels like he does it because he actually likes everything (similar to Edgar Wright, though Wright is more polished), and so he’s excited to cram it all in because it’s fun. There’s an early part of the film where the main villains, the Axe Gang, are particularly ruthless in taking over the bribery of the police from a rival group, gunning down innocent bystanders, lopping off limbs, and, as a montage of their takeover plays, they dance, bizarrely enough, in coordinated, slick unison to a swing jazz number. It might seem like a lot for the opening 10 minutes, but I don’t think it feels frenetic or forced, but is more of a statement about the whimsical tone of the story. There’s something immensely satisfying watching a movie unfold so effortlessly while juggling all kinds of stylistic elements. 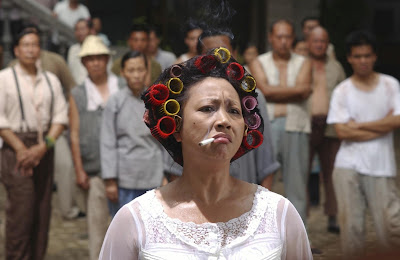 Another satisfying aspect is the type of martial arts action that is used. Yuen Woo-ping, the Kevin Bacon of stunt coordinators, used older, lesser known forms in the fighting, so audiences were treated to forms that have probably never been put to film, and certainly never been enhanced with modern visual effects. That also didn’t stop them from coming up with completely made up things either, like the two blind assassins who choose to attack their victims with the lethal spirits conjured up by their Chinese harp, or the Lion’s Roar (straight from the mouth of the hypertalkative Landlady), or the Buddhist Palm (which can flatten a city block). The movie tends to either avoid conventional martial arts tropes or at least bend them to fit the shape of Chow’s particular brand of humor, like when Chow’s character, when faced with an army of Axe Gang assailants, decides to attack them by cartoonishly stamping on their feet until they’re paper thin, or rendering the main villain, the Beast, as a balding, bathroom slipper-wearing guy in his underwear.

That sense of humor is the voice of the movie. I’ve heard some of the complaints where the humor is characterized as too reminiscent of Looney Tunes, Wile E. Coyote and Roadrunner stuff, but I think that is an intentional choice and works for different reasons. One is cultural; Chow in particular is a purveyor of a brand of absurdist, nonsensical humor traditional in Hong Kong called mo lei tau (“makes no sense” in Cantonese), and this humor fits the larger than life characters in this tall tale. The other is more narrative; Chow’s main character makes so many wrong choices because he was traumatized at a young age attempting to defend someone. When that attempt fails, he turns to a life of petty crime avoiding doing the right thing, trapped in the memory of his childhood trauma. He brags about wanting to be a gangster so he can get the women and money that come along with it, but even that is a failure because those around him can see that he doesn’t have the true malice or strength of will that a real criminal might have. So the whimsical tone and the nonsensical humor takes on a new significance because it reflects the immaturity and stunted development of the lead character, who uses his humor to hide from his responsibility to do the right thing. It’s only later when Chow’s character gets some sense knocked into him (literally) that he becomes what he was meant to be, confronting his childhood demons, and embracing his responsibility like he should. 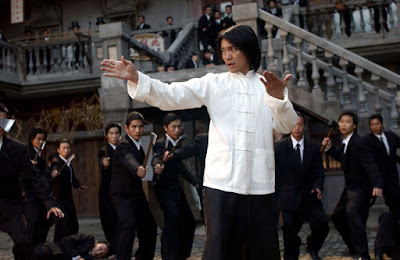 What I’m most thankful for in this movie, ultimately, is that it still takes the time to have emotional beats (as weird as that might sound in an action comedy) that go along with the serious or darker ones. Perhaps that speaks to Chow’s background in children’s programming in his comfort with a helter skelter pace and the need to lighten the mood with humor, but I also think that the movie just wants to be fun, and fun comes from a warm place in the heart. It makes me feel good to think back about Kung Fu Hustle, and in a sorely needed time of giving thanks, I’m thankful for movies that can make me smile.

Posted by Patrick Bromley at 4:30 PM