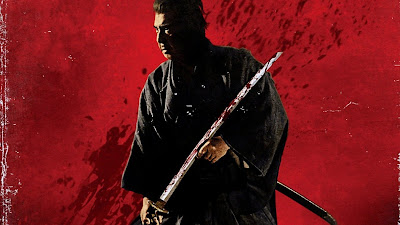 For the first entry in this week-long series, I'm giving thanks for blades, blood, babies in carts and babies on my lap.

With all the darkness in the world lately, we here at F This Movie! thought it might be nice to spend the week of Thanksgiving talking about specific movies we are thankful for (and yes, I know that is grammatically incorrect but I decided that "Movies for Which We are Thankful" sounded douchey). It was a suggestion from Adam Riske, who wanted to revive a column we did back in 2010, just a few months after the site launched. I liked the idea so much that I asked all of our contributors to submit a piece, meaning we will be running these all week long. We'll get back to our regularly scheduled content next week. For now, let's give thanks.

I had a hard time choosing a movie to talk about for this series, partly because I have so many movies I'm thankful for and partly because I've already spent the last six years talking about a number of them. I landed on1980's Shogun Assassin for a number of reasons. 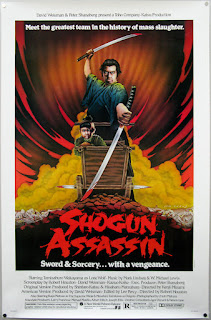 I've been working my way through Criterion's new box set of the original Lone Wolf and Cub movies, the series from which the Shogun Assassin films were culled. The Lone Wolf movies are great, combining the kind of epic period drama Kurosawa became famous for with the visceral thrills and bloodshed of a Shaw Brothers movie. As I went through the films, though, I kept thinking back to something I heard when I attended the Grindhouse Film Festival at Chicago's Music Box Theatre this past #Junesploitation. Festival programmer Dan Halstead held a secret 35mm screening of Shogun Assassin to close the fest out and introduced it as "the greatest movie ever made." I'm not going to say he's right, but I do think he's on to something.

For those who are unfamiliar, the Lone Wolf and Cub movies were a series of six films made in Japan in the early 1970s, based on a popular manga series and starring Tomisaburo Wakayama as Ogami Ittō, former executioner for the shogun who is framed, disgraced and forced to walk the path of a rogue assassin, and Tomikawa Akihiro as Daigoro, his infant son who he carries with him in a cart. Robert Houston -- a former actor best known for playing young Bobby in the original The Hills Have Eyes -- bought the rights to Kenji Misumi's films from Toho and edited the first two movies, Lone Wolf and Cub: Sword of Vengeance and Lord Wolf and Cub: Baby Cart at the River Styx, into a single blood-soaked epic, dubbing the dialogue into English, dropping in narration from the infant Daigoro and adding a new synthesizer score courtesy of Mark Lindsay from Paul Revere and the Raiders. 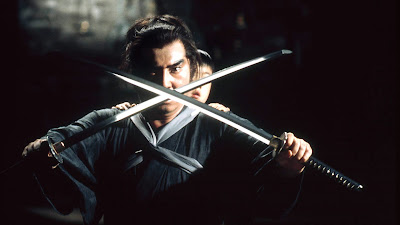 Everything about this sounds terrible on paper -- a bastardization of art that has been dumbed down for American audiences who refuse to read subtitles. And some of those things are true. Still, Shogun Assassin manages to be something most movies aren't: completely fucking awesome. It is the ultimate "remix" film, a kind of postmodern exercise that picks and chooses what it wants to retain, disregarding the rest and coming up with something that, while composed mostly of existing work, manages to create a totally different movie experience.

Shogun Assassin hacks the first two Lone Wolf and Cub films (mostly the second) down to its barest essentials, resulting in what is basically an 85-minute fight scene as Ogami encounters new adversaries every few minutes, battles them and slices them up into piles of limbs and geysers of blood. By abandoning most of the plot, Shogun just kind of drifts along from moment to moment; the editing has a dreamy, non-linear quality that is improved, not weakened, by the new voiceover from seven-year old Girban Evans, whose delivery has a flat, wistful quality reminiscent of Linda Manz in Days of Heaven. It becomes a kind of anti-narrative, the skeleton of a highlight reel with just enough bones to hold in a soul. While the Lone Wolf movies make the case that father and son are condemning themselves to Hell, it does so over the course of several films. I would argue that Shogun Assassin does a better job of making that point in just one movie, probably because the editing and amazing synth score give the whole thing a much darker feeling of constant dread. 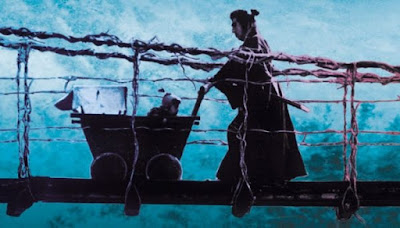 At the most basic level, I'm thankful for Shogun Assassin because it kicks ass. I am not a violent person in the slightest, but I have been drawn to violent movies my entire life. I hate real-life violence. I love movie violence, particularly when it is exaggerated and cartoonishly bloody and as far removed from real violence as it can be. I don't know if I love horror movies and action movies because of this predisposition towards cinematic violence or if I enjoy cinematic violence because it is such a function of horror and action movies; whatever the case, Shogun Assassin is like a ballet of bloodshed that pushes my very specific buttons. While this has been a year in which I've gotten way more into martial arts movies (thank you, #Junesploitation), I've been a fan of Shogun Assassin for several years, probably for this very reason. I think it was a movie I discovered in the wake of Quentin Tarantino's Kill Bill, a movie (or movies) that borrows a whole lot from Misumi. It's not really a traditional martial arts movie, anyway, in that the characters generally don't engage in hand-to-hand combat nor that actors display the feats of athleticism we've come to associate with the genre. It's a swordfighting movie, a revenge movie, a samurai movie told in the language and the aesthetics of a horror film. 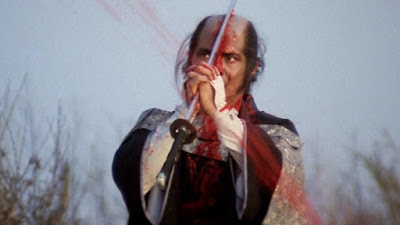 The summer my daughter was born, I had a lot of long nights sitting up with her while she adjusted to sleeping outside the comfort of a human body. These can be dark days, and it's not really something people prepare you for when you're expecting a baby. You don't realize how much you miss sleep until you stop getting any of it -- and I say that as someone who doesn't sleep a whole lot to begin with. So to get through this time, she and I would stay up all night watching movies -- specifically Shogun Assassin and its sequels. I'm sure this makes me seem like a bad parent, but keep in mind that she was still at an age where she had no object permanence. She'd forget I existed if she wasn't looking at me, so I can't imagine anything she saw in Shogun Assassin did any lasting damage. At the same time, I like to think that maybe something stuck somewhere in her lizard brain and that she'll someday develop a love for violent martial arts movies that I can somehow take credit for, having imprinted them on her as an infant. It's been four years since that summer and I no longer remember what it was like to feel so tired I thought I would go crazy. What I remember is holding my little Rosie on my lap and watching Tomisaburo Wakayama cut a whole bunch of people the fuck up. It's a happy memory I will always have.

But maybe the biggest reason I'm thankful for Shogun Assassin -- aside from how happy it makes me and how it will always remind me of my baby girl -- is that it's a movie that helps me to redefine the lines of what a movie can be. Shock Waves host (and friend of F This Movie!) Elric Kane often refers to certain kinds of movies as "pure cinema." It has become a running joke on that podcast, but I know exactly what he's talking about. There are movies that aren't necessarily interested in telling a specific story or creating three-dimensional characters. They are images and sound, designed to invoke a direct response from the pleasure centers of our cinephile brains. Shogun Assassin is pure fucking cinema.

It doesn't necessarily subscribe to the conventional standards of what makes a great film in that it doesn't have a traditional writer and director and cast, etc., because Robert Houston took what Kenji Misumi had already done and reoriented it into something better suiting his own sensibilities. And while it may be the exception and not the rule, it is proof that new art can be created from existing art. I don't know that I'll ever decide how I fully feel about our culture of sampling and remixing -- it ultimately doesn't matter, because that's the world we live in now -- but I know that Shogun Assassin makes the case that it is possible to create two great films from the same source. While more traditional schools of thought stick to notions about how film can achieve objective artistic merit, Shogun Assassin reminds us that there aren't any rules about how a movie gets to greatness. What matters is that it's great. 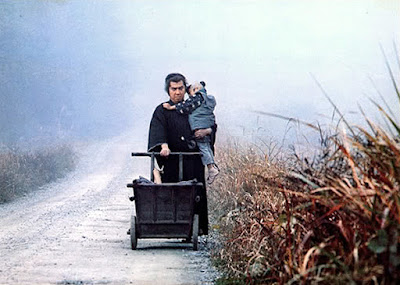 The Lone Wolf and Cub movies are considered high art (I mean, it is in the Criterion Collection), while Shogun Assassin is considered "low" -- an exploitation film that played primarily the grindhouse circuit when it was released in 1980. I'm thankful that I can love them both for different reasons, even when they are ultimately not all that different. One of my very few decent qualities as both a film watcher and a film writer is that I have always been able to appreciate both kinds of movies; my tastes tend to gravitate towards the latter, but I can love Steven Seagal movies and slashers and Troma while still respecting and loving Bergman films with the rest of the cultured elite (they're about girls, right?). It's one of the things that I'm most proud of with F This Movie!, too -- we manage to talk about and foster conversation about all kinds of movies, not just the ones that receive widespread critical acclaim and not just the kinds of cult movies that are the focus of many genre-specific sites. Shogun Assassin is a perfect representation of a film that lives in both worlds. It's the kind of movie I love: stylish and dark and violent and cool. More than any Lone Wolf and Cub movie, this is the one to which I will return most often. And while she's still in the throes of a pretty major obsession with Disney princesses, I know that some day I will go into my daughter's room and find her sharpening a samurai sword, preparing for her very own roaring rampage of revenge. On that day, I'll know I have truly done my job.