A Movie I'm Thankful For: Star Trek: The Motion Picture 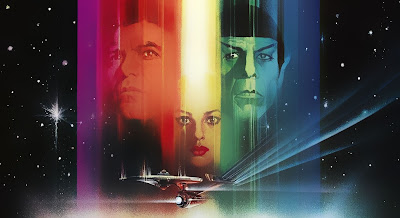 The human adventure is just beginning.

A lot has been said about 1979’s Star Trek: The Motion Picture, so in order for me to explain why I’m thankful for this movie, we must first set aside the highly-discussed elements like that bald lady, Shatner’s new thicket of hair, the unflattering costumes that put camel toes and moose knuckles center stage, the many long, tedious special effects shots, and let’s even choose not to discuss the alarming fact that there’s a pedophile in the cast. Most of these (pedo excluded) are superficial aspects of the film. Beneath these things lies an emotional undercurrent that seems at odds with its reputation as the most boring of all the movies.

People don’t really even ARGUE that Star Trek: The Motion Picture isn’t boring these days, because it’s generally accepted that it is. Yes, it can be a nightmare for those of us who struggle with ADD, and it’s inarguable that this first film in the series is an entirely different beast than any other that would come after it, but I’ve actually come to see this as its greatest asset. You won’t find any fist fights or long action scenes in this movie. No one has sex (that we know of). There are no space chases, no scenes of a ship whizzing by the screen at high speed, and nary a Beastie Boys song to be found. As an entry in then-new blockbuster cinema filmmaking, it fails to ignite and it fails to excite.

Dig a little deeper and you find an undercurrent of human electricity beneath the tedium. Unlike future films which embrace the more adventurous aspects of the premise, Star Trek: The Motion Picture plays out almost entirely in human drama. Sure, there are loads of special effects shots, but they merely serve as the window dressing for a very cerebral, introspective story. Star Trek: TMP presents us with a future very different from the one audiences had last seen during the televised adventures of Kirk, Spock, and McCoy a decade earlier. The universe is expansive and dangerous. Even a simple transporter trip (“beam me up…carefully”) can go wrong and end life in an instant. Gone are the bright colors of the TV series that came straight out of a roll of Life Savers; they’ve been replaced with earthy browns, blues, and grays against the cold darkness of space. Humanity feels TINY in this movie, almost completely alone in a sea of emptiness. Gone are the constant winks at the audience; this crew seems pretty dour and cynical when we meet them. Spock’s been on leave trying to purge himself of all emotion. McCoy has moved on from Starfleet and is mad that he’s been reactivated and that he has to shave his sweet hipster beard. Kirk has become an admiral, achieving a higher level of authority but becoming a part of the machine that he once rebelled against.

I appreciate how the movie spends the bulk of its running time showing the crew come back together, overcome their differences and their own character flaws, particularly Kirk (“Captain’s log: Kirk is a jerk). There is a larger, universal threat that looms throughout the plot, but the real focus of the story falls on the people in the ship. I believe that the real enemy of Star Trek: TMP is our own nature. Kirk is consumed with jealousy and his need to have power and be in control at all times, refusing to cooperate with others or recognize the competence of those who have been hired for this mission. While future movies would explore other aspects of Kirk such as his refusal of death, only Star Trek: TMP spends so much of its time on Kirk’s insecurity and need for power. Not many movies take the time or have the luxury to explore the flaws of their leads like this one does.

I appreciate that the screenplay finds new and interesting ways to deal with the overall threat in the film, eschewing the usual tropes of a climactic battle and instead opting for CREATION instead of destruction. As our characters start to rediscover their own purpose, the film seems to be trying very hard to tell us that there is beauty in exploration, discovery, and birth, which is what it thinks we are here to do as a human race. In contrast to the dark, uncertain backdrop (which reflected the political and social climate of the 1970s during which this film was created), the messages of humanism, optimism, and reaching beyond our own flaws to work together are kind of staggering in their boldness. 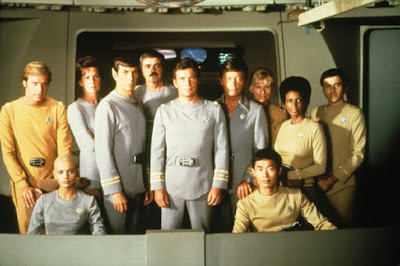 Star Trek: The Motion Picture is full of firsts. It’s the first cinematic voyage of the starship Enterprise. It’s the first time we see Klingons with those funky head-ridges, the way we’d come to know them from that point forward. It’s the first time we get to hear the sweeping, adventurous, hopeful theme from Jerry Goldsmith. Trek’s creator Gene Roddennberry liked the music and thought it exemplified his themes so much that he made it the theme song for Star Trek: The Next Generation. All of these are things for which I’m very thankful. Without this movie, the franchise that I love probably wouldn’t have lived past the 1970s. It would be like a Bee Gees song that you recognize but don’t really want to listen to because it’s too rooted in one particular time and place.

Unfortunately in my opinion, the sequels were brought more in line with traditional blockbuster tropes. Nicholas Meyer was hired and things were changed forever. I love ALL of the movies in the series and I adore Nicholas Meyer; however, the shift in tone is somewhat unfortunate; every subsequent movie offers more popcorn thrills and larger-than-life bad guys to please all audiences and sacrifices some of the introspection that makes ST: TMP so unique. Roddenberry, was only allowed to be heavily involved in this first film, making it the strongest, purest example of his vision for the fictional world he created. Maybe that’s why he was conflicted and sometimes harsh in his thoughts on the end results of future films. It’s sad to me that Gene Roddenberry’s thoughtful, challenging vision of the future never really mixed with mainstream popular entertainment. Maybe it never could. 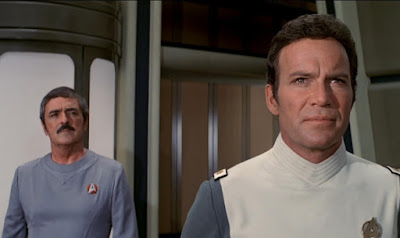 When I’m feeling down or beaten up by events in the world, I almost always turn to Star Trek. It doesn’t represent a perfect future: there is still violence, war, racism, jealousy, and avarice. But it shows a humanity that is actively trying to put aside most of their differences and is striving toward being the best that they can be. I believe that Star Trek: The Motion Picture is the boldest statement of this in the entire franchise. This Thanksgiving, I’m grateful for this weird, flawed -- and yes, sometimes even boring -- movie and its promise that “the human adventure is just beginning.”