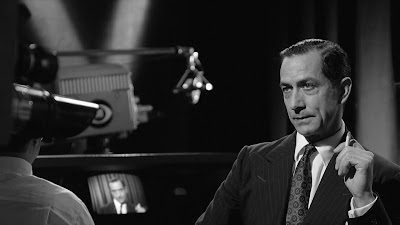 “We will not walk in fear, one of another.”

This wasn’t supposed to happen. We were supposed to be better than this. We were supposed to listen to each other and come together as a cohesive whole. Clearly, we all understood what was at stake. Clearly, we all understood that those who preached hate and fear would see the error of their ways and unite under the banner of progress and inclusion. We would protect ourselves and promote the common good. We all felt that way. We still do. The problem is that they do, too. Whoever your “they” happens to be, they feel it, too. They feel enormous, crippling fear at the thought of your way of life prevailing. They cry and they shout and they wish their way into a reality that is completely foreign to yours and mine. That is the danger of a plural society. That’s what’s so hard about sharing and coexisting. That’s why, so often, we stop engaging with one another. That’s where we are now, and that needs to change. We need to hear each other out. We need to believe and we need to trust and we need to act. We need to speak our minds and defend our ideals. We need to ask questions and we need to take chances. We need to listen to Ed Murrow.

George Clooney’s Good Night, and Good Luck pits Murrow (David Strathairn), the legendary CBS broadcaster, against Wisconsin senator Joseph McCarthy, the legendary xenophobic bigot. Both of them knew what was right: McCarthy knew that the communists had infiltrated the government of the United States. He knew that our children were in danger. Murrow knew that McCarthy was breaking the law, that he was using disgusting, Draconian methods to embarrass innocent American citizens. They both used the power of the media to drive their messages home. They grandstanded and they proselytized. They made it important, and they asked us to make up our minds as we saw fit. For Murrow, it was a matter of conscience: does he pander to advertisers, to his news director (Jeff Daniels) and head honcho (Frank Langella), or does he team up with his producer Fred Friendly (Clooney) to expose and attack intolerance where it lives? Would his team of reporters (including Robert Downey, Jr. and Patricia Clarkson as married-in-secret couple Joe and Shirley Wershba) go along with him? Would they be punished for speaking out? 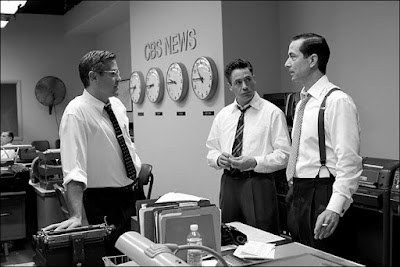 Good Night, and Good Luck is a film about fear. It’s about the fear many of us feel today. It’s about the fear that our wives and daughters felt when they woke up this morning. It’s about the fear our students feel as they struggle to understand this new status quo. It’s the same fear our opponents felt when they chose the direction they wanted our country to take. It’s a paranoid film, at times; its voyeuristic camera sneaks in and out of private conversations, using close-ups and extreme long shots in equal measure. It listens over our shoulders and sits quietly while we make secret confessions. Its archival footage of congressional hearings makes us face up to our past. It puts hate in context and indulges in the pathetic squabbling of prideful men. It does this to teach us a lesson about ourselves. To shine a light, tilt a mirror. It points out the futility of name-calling and fear-mongering while admitting their dangerous appeal. It shows us that an editorial and biased news media is not an enemy of the state; the media has, in fact, always had a point of view. Its leaders towered like giants over our national discourse. It has stood up for those who could not stand up for themselves. At its best, it has kept us informed, not just entertained.

Murrow made a choice. He chose to engage. He chose to act, to care. He was a hero. He was a patriot. The Wershbas were patriots, too. They chose love instead of fear. They chose to be themselves. They were principled and committed, and that is not fucking easy. There is no immediately-apparent reward for fighting for a cause greater than oneself. The reward is intrinsic and ideological, but that’s what gives it meaning. Apathy and cynicism are deep, empathetic, human emotions. No one would be blamed for succumbing to them, especially in our Modern Times. We should be afraid of acting, of caring. It should make us nervous. It should separate the tepid and the indifferent from the brave and the ambitious. Not everyone can do what we do. Not everyone can rise up to a powerful bureaucracy and say “stop.” Not everyone can stand firmly on two feet and say “now.” Not everyone can admit they are scared and say “help.” But if we listen, if we ask questions and offer support, we can find roads to compromise and inclusion that push past the anger and insecurity that have insulated us from each other for so long. 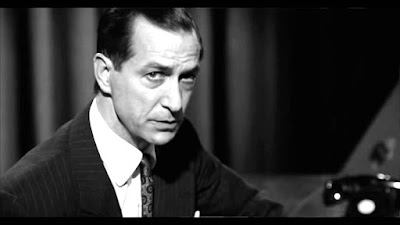 “We must not confuse dissent with disloyalty. We must remember always that accusation is not proof, and that conviction depends upon evidence and due process of law. We will not walk in fear, one of another. We will not be driven by fear into an age of unreason. If we dig deep into our history and our doctrine, we will remember we are not descended from fearful men. Not from men who feared to write, to speak, to associate, and to defend causes that were, for the moment, unpopular…We can deny our heritage and our history, but we cannot escape responsibility for the result…The actions of the Junior Senator from Wisconsin have caused alarm and dismay amongst our allies abroad and given considerable comfort to our enemies. And whose fault is that? Not really his; he didn't create this situation of fear. He merely exploited it, and rather successfully. Cassius was right: ‘The fault, dear Brutus, is not in our stars, but in ourselves.’

Good night, and good luck.”
Posted by Patrick Bromley at 5:00 AM