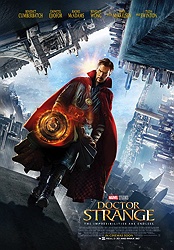 Marvel continues to move the bar for mainstream nerdiness.

I can still remember back when the first Iron Man was a huge hit back in 2008 and Marvel announced they would be making a Thor movie, I thought to myself "Sure, Iron Man I get, but there's no way the average moviegoer is going to accept a movie about Norse gods fighting and Asgard and rainbow bridges and all the geeky stuff that's part of the character's mythology." And then Thor was released and it, too, was a hit. Then a few years later Guardians of the Galaxy was announced and I once again suspected Marvel might be overestimating the mainstream's tolerance for the kind of goofy shit that regular comic book readers willingly accept on the regular: outer space, talking raccoons, talking trees that speak only three words to represent everything they're saying. Once again, I was gladly proven wrong and Guardians was one of the highest-grossing films of 2014.

Well, now here's Doctor Strange, Marvel's latest attempt to launch one of their characters and hopefully kickstart a franchise, and it's the nerdiest movie they've made yet. That's the best thing about it. Without the super nerdy stuff, this would be just another superhero origin story. At times, it still is. 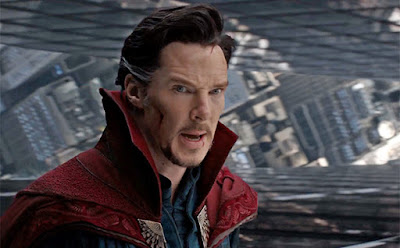 Benedict Cumberbatch plays Dr. Stephen Strange, celebrated and supremely talented with the confidence and ego to match -- he's Tony Stark in surgical scrubs. When a terrible car accident mangles his hands and takes away his ability to work, Strange seeks answers elsewhere: namely, the secret sanctum of Kamar-Taj in Nepal. Here he learns the mystic arts and sorcery from his new friend Mordo (Chiwetel Ejiofor) and the Ancient One (Tilda Swinton), a centuries-old being who travels through multiple realms and uses magic to protect the planet from every kind of evil. Their skills are put to practice with the arrival of Kaecilius (Mads Mikkelsen), a former student of the Ancient One who has stolen the pages of a powerful spell to conjure the being Dormammu from the Dark Dimension.

From that plot summary through its marketing campaign, there was very little that had me excited about Doctor Strange outside of my own curiosity -- how would Marvel make what I would argue is one of its less "accessible" characters work in the context of a mainstream blockbuster? Plus, there were all sorts of things holding me back from getting too excited about the movie. Beyond just my superhero fatigue, I never really read nor got into Doctor Strange as a character in the comics. While I recognize that he is very talented, Benedict Cumberbatch hasn't yet give the performance that makes me say "yes, I love that guy" (I haven't watched much Sherlock, so there). Director Scott Derrickson has a body of work that for me has ranged from decent to not very good. More than anything, though, I suspected that Doctor Strange would lean heavily into the mystical, the supernatural, the cosmic, and that's always been a side of the Marvel Universe that didn't much interest me even in my hardcore comic reading days.

The good news is that Doctor Strange upends most of my reservations. Cumberbatch is good -- he always is -- but also allowed to be more charming and likable than he's usually afforded the chance to be on screen. Derrickson proves to be an inspired choice. A devout Christian, his films have often dealt with themes of faith and belief, and he brings those same ideals to Doctor Strange to make a movie that, while not explicitly Christian, is still very much about faith and opening ourselves up to the possibilities of powers greater than ourselves. More than that, though, is how Derrickson, the movie's screenwriters and the VFX team have conceived of inventive and truly spectacular visuals to supplement what is otherwise a very familiar story. There are mind-bending chases through cities that continue turning and re-forming themselves, trips into the cosmos for a brief detour we'll call Black Light Poster: The Movie and a genuinely inspired climax that both works as an antidote to the endless destruction we've seen in the majority of superhero movies and a case of a hero defeating his enemy not through a display of strength or firepower but through intellect, creativity and ability. It's really cool. 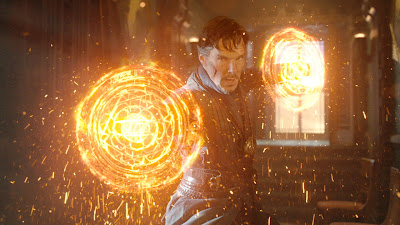 Derrickson appears to understand that with the number of big superhero movies we're getting these days (and while it's only a few of them a year, I don't think it's out of line to suggest that the Hollywood calendar and surrounding discussion online feels defined by them), it's necessary to do something different with this adaptation. At this, he is mostly successful. In addition to the trippy visuals, Derrickson is able to take some chances with his casting. Just read the list of stars: Cumberbatch, Mads Mikkelsen, Chiwitel Ejifor, Tilda Swinton. That could just as easily be the lineup for a new art film from the Weinstein Company instead of the cast of the latest Marvel blockbuster, and I'm happy to see that we've arrived at a point at which great actors can be cast in these kinds of movies and not just movie stars. The audiences will still come.

Not that everyone escaped unscathed. Mikkelsen, through no fault of his own, is playing a generic and forgettable mystical bad guy with very little motivations beyond "destroy your world!" It's cool to see him on screen, but the film makes little use of his talent. Rachel McAdams is given another in her long line of thankless parts; she has good chemistry in her scenes with Cumberbatch, but her role consists primarily of a) being concerned, b) being confused and c) supporting the male lead. She's too good to keep getting cast in these roles, and Marvel has too long a history of sidelining their female leads. She's Pepper Potts and Betty Ross and Jane Foster and, to a large extent, a pre-TV Peggy Carter. 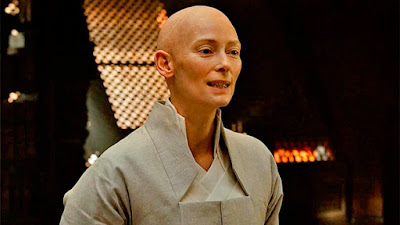 I understand that the casting of Tilda Swinton is problematic in its own right -- another example of whitewashing a character who is written to be Asian -- and it's not a choice I can defend on those grounds. Derrickson has said that he was trying to avoid tired Fu Manchu/Dragon Lady stereotypes, but I can't say that I agree. It's not the race of the character that defines those stereotypes, but rather the way that character is written. At any rate, I will say that Tilda Swinton is wonderful in the part. She's physical and wise without being condescending. There is a light behind her eyes that suggest she is always thinking, absorbing, learning. Above all else, she's so playful and fun without ever going for easy laughs -- something Doctor Strange is guilty of doing far too often. There are jokes that work, yes, and I can appreciate the attempt to add some levity to a movie that would otherwise get bogged down in nerd speak about sacred spells and dark dimensions, but too often a beat will stop cold just for some obvious laugh line that disrupts the sincerity of the thing. 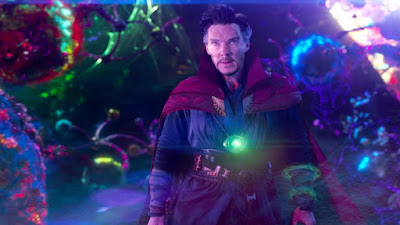 Despite its major plot beats feeling way overly familiar and a few other issues I have with the movie, I come down on the side of liking Doctor Strange for the inspired new elements it introduces both into the Marvel Universe and into mainstream blockbuster filmmaking. With the psychedelic visuals and his tacky disco costuming, I've always considered Doctor Strange to be a real '70s superhero. Derrickson's movie gets that element right, as does the cool score by composer Michael Giacchino (whose best themes don't get as much play as some of the more generic pieces, but they're still in there; stay through the credits both for the two easter egg scenes and for Giacchino's best composition). As Marvel continues to roll out new characters in standalone movies, this is how to do it: hire the right talent, trust them to make the movie they want to make and never be afraid to take the audience to places you once couldn't have imagined they would want to go. Also, it never hurts to include Scott Adkins.
Posted by Patrick Bromley at 5:00 AM