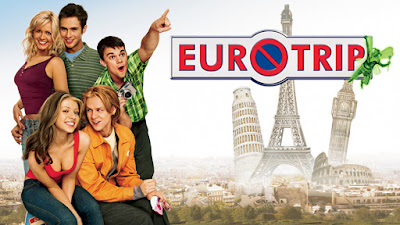 I really wish I could tell you when I first saw Eurotrip, but at this point I’ve seen it so many times that it has become a blur. It never ceases to make me laugh, it’s got great characters, great comedic timing, and what may be the greatest cameo in cinema history. The plot is absurd, but this movie bleeds absurdity, so nothing ever feels unbelievable in the world it creates. It’s one of my favorite movies and one of my favorite comedies of all time. It’s endlessly watchable and serves as a standard for how I judge other comedies. Yes, I like it that much.

The short of it: due to a case of mistaken identity, Scott (Scott Mechlowicz) and his best friend Cooper (Jacob Pitts) take a last minute trip to Europe to find the love of Scott’s life, a German girl named Mieke (Jessica Boehrs). While in Europe, they meet up with their two other good friends -- twin siblings Jenny (Michelle Trachtenberg) and Jamie (Travis Wester). Together the foursome set out traveling across Europe to locate Mieke for Scott.

On the DVD case and movie poster Eurotrip, boasts that it is brought to you by the “Producers of Road Trip and Old School,” and chances are you won’t be able to get a DVD copy unless it’s the “Unrated” version. There is nudity, crass humor, and all the other things you came to expect in the post-American Pie rush of the late '90s and early 2000s. We’ve all seen these movies, but Eurotrip’s a bit different. There are little quirks in the movie that just add to the fun. For example, whenever the kids go to a new country, we see a thrown together stop motion collage of every stereotype that Americans know about that country. Along those same lines, at some point the four all decide to go to Berlin and use their table in Paris to map out their locations. Eurotrip continually jumps back to this map made up of salt shakers and plates rather than an actual map. It’s these elements that separate Eurotrip into its own niche within a very specific cluster of comedies. 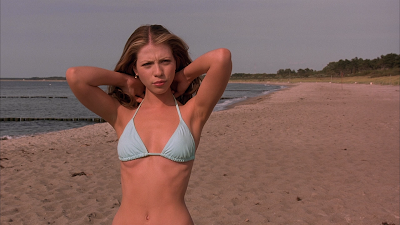 Put in the director’s chair is Jeff Schaffer in his first directing gig. Previously, Schaffer had done a ton of television work as a writer, working on everything from Conan to being one of the head writers on Seinfeld. I think that this speaks a lot to what I find the best about Eurotrip and that is its timing. Everything is a set-up not just for the next joke, but for the next ten jokes. It’s established early in the movie that Scott is terrible at German despite taking it for years. This joke is called back over and over again, causing more and more problems as the group travels deeper into Europe. For his first directing job, I love how Schaffer uses the camera to sell some jokes that wouldn’t land otherwise. The scene I point to as an example is when the kids decide to visit a nude beach and find out quickly that it’s nothing but a bunch of naked dudes. Jenny arrives late and proceeds to take off her clothes and her brother jumps in front of her. Normally we’d see the slow motion of him in front of a naked Jenny; instead, the camera goes at normal speed and Jamie lands on his face several feet away from his sister. It’s hilarious and I laugh every time. The entire build up to that moment doesn’t work without the camera, and Schaffer uses it well. There is an entire fight scene between Scott and a French street performer that should not work, but Schaffer shoots the entire scene as an homage to kung fu movies that plays so well and is filled with gag after gag that serve to increase the comedy elements. Nothing is wasted in Eurotrip. Every single second is used to set-up or tell a joke.

Eurotrip also works by understanding that every country has its own stereotypes and stigmas and plays them to their comedic lengths. There are so many talented people doing great characters that serve simply to laugh at the stereotype, from Fred Armisen as the “Creepy Italian Guy” to Lucy Lawless as Madame Vandersexxx to my favorite, Vinnie Jones, as Mad Mayna the Soccer Hooligan. They are all Saturday Night Live characters brought in to interact with our characters for a few minutes and then move on. Eurotrip is by all means not the first movie to do this, but does it so well with so many characters that it works on a level I haven’t seen a lot. 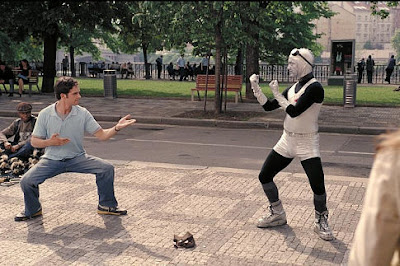 I’ve seen a lot of movies, and I will argue that in the history of cinema there has not been a movie that has “running jokes” or “callback” jokes better than Eurotrip. Jokes are set up and not paid off for several scenes and running jokes continue to build on themselves until they eventually come to the punchline. When we are first introduced to Jenny and Jamie they mix up drinks and Cooper says “You two are the worst twins in history.” While I appreciate the “show don’t tell” attitude, I do remember seeing it the first time and thinking that was a pretty shitty way to show how they’re the “worst twins in history.” Eurotrip then spends the rest of the movie proving it two you over and over, until after a drunken night in Eastern Europe, Eurotrip goes all-in by having Jenny and Jamie make out on the dance floor. Big ups to Trachtenberg and Wester, because they do not pull a punch in this make-out scene. It’s borderline grotesque and is the perfect punchline to a joke that took 80 minutes to get to.

Eurotrip has some amazing characters. I think it can be said that for a comedy to work, it’s critical that you are invested in the characters because the jokes and plot will have a hard time selling themselves if you don’t love the people telling them. I love Scott, Cooper, Jenny, and Jamie. I want to hang out with them, whether it’s going to Europe or just a Saturday. Cooper is the best friend everyone wants; he’s hilarious, loyal, and very easy to understand. There is not a situation where Cooper makes a decision we didn’t already see coming or wouldn’t have made ourselves. Jacob Pitts nails this character so much that I do wonder why we haven’t seen more of him playing similar roles. He’s hilarious and the absolute perfect opposite to the ultra-conservative Scott. Everyone works, and even the things that don’t work all the way would be the best thing in lesser movies. 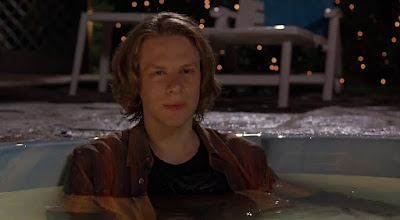 In making a list of my all time favorite movies, I don’t think I’d have the stones to put it on Eurotrip on there, but it is definitely one of the movies that I can revisit again and again. It constantly builds on itself and has become a litmus test when talking to others about movies. I don’t expect you to love Eurotrip, but if you hate it? Well, I think we’re going to have a hard time seeing eye to eye on just about anything.