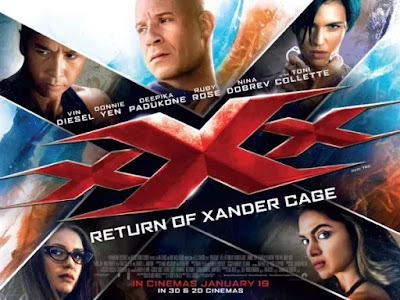 The things I do for my country.

Diesel reprises his role as Xander Cage, former EXTREME ATHLETE turned secret agent who faked his own death and has been living in hiding since the events of the first movie. We pick up with him in the Dominican Republic, where he has become some kind of folk hero: beautiful young woman throw themselves into his tank-topped sausage casing and he does some EXTREME skateboarding that there is no way 50-year old Vin Diesel can ever do in order to create an illegal cable hookup and bring FUTBOL TO THE PEOPLE. It's here that he's approached by Special Agent Marke (Toni Collette), who gets him to return to action to recover Pandora's Box, a super high tech device capable only of making satellites crash back down to Earth. Xander is tasked to take down the team who stole Pandora's Box -- including Bollywood superstar Deepika Padukone, plus international martial arts superstars Donnie Yen and Tony Jaa -- so he enlists some members of his old crew. Or are they just his friends? Whatever. They include sniper Ruby Rose, stunt driver Rory McCann and a DJ played by Chinese recording artist Chris Wu. Yes, a member of this EXTREME crew is a DJ. At one point he foils an assassination attempt with the power of his DJing. Did I mention this movie is so stupid?

So you may have noticed something about that plot description and cast list: it's clear that the filmmakers involved with Return of Xander Cage both are 1) hoping to pivot away from this just being the Vin Diesel show and more towards an ensemble and 2) stacking the film with international stars in the hopes of raking in that sweet, sweet foreign box office. I'm happy with both rationales, because I think it results in a better, more interesting action movie. It's nice to see the latest Hollywood blockbuster and the lead actress is an Indian woman, plus any movie with both Donnie Yen and Tony Jaa is a movie worth seeing. This double casting is never really capitalized upon at all, though, in part because Tony Jaa is given nothing to do but sport a bleached blonde fauxhawk and in part because director D.J. Caruso is rubbish at shooting action and fails to really capitalize on what either man can do. Donnie Yen fares considerably better, and in fact comes very close to make the movie worth seeing completely on his own. He's super cool and charming and every time he's on screen I found myself wishing he was the new xXx and that this was his movie.

Actually, I could say that about a few of the supporting cast -- not just Yen (who is the best by a wide margin, making this the second big movie he's stolen in a matter of months), but also Deepika Padukone (who also has very little to do but say things like "Pandora's Box must not fall into the wrong hands!") and Ruby Rose, who has good presence and cuts a good action figure when the moment calls for it. Unfortunately, she's done in by the screenplay's need to always make her "cool" with her tattoos and her edgy attitude and her ability to kill anyone and anything from very far away. This constant emphasis on COOL is one of the great downfalls of xXxIII (still a better title), because this is a movie that insists every character be VERY COOL. Everyone postures. Everyone gets the one liner. Here's the problem with this approach: when every character is set up to "the cool one," no one is actually the cool one.
Which brings us back to this movie being very, very stupid. The dialogue, by screenwriter F. Scott Frazier, is some of the most laughably terrible shit I have heard in any movie not directed by Michael Bay. I couldn't believe what I was hearing most of the time, and I regretted not being able to accept my friend and colleague Adam Riske's invite to see the movie with him on opening night because it meant seeing it by myself on a Saturday afternoon with no one there to bear witness or to prove that I was really hearing the dialogue I was hearing. I feel actively bad for Toni Collette, an Oscar-nominated actor who I hope was paid a huge stack of cash in exchange for the shit she is asked to say in this movie. It's embarrassing. Vin Diesel, of course, is Vin Diesel: his dialogue is growled in short, punchy bursts that exist to seem funny and cool but manage to be neither. All it manages to be is stupid. In the EXTREME.

To the movie's credit, at least it doesn't take itself very seriously. The original xXx, a kind-of modernized James Bond for the Mountain Dew set, was lacking in self-awareness because director Rob Cohen was busy buying into the myth of emerging superstar Vin Diesel and made deifying him as the new great action star his top priority. DJ Caruso isn't beholden to making Return of Xander Cage into purely a straight-faced star vehicle, so Diesel seems to be having a good time and Caruso allows for a much greater sense of playfulness throughout the film. But then he also does those freeze-frame character stat screens every time a new person is introduced into the movie like it's fucking 1996, because it turns out DJ Caruso is not that great of a director. He's competent and xXxIII is competent. It's also really, really stupid. Maybe I should have led with that. 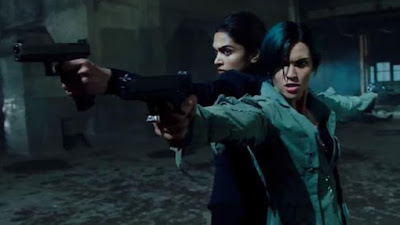 In some ways, xXx: Return of Xander Cage is the best movie in the series. In other ways, I don't care. I mean, this is now the third film in a franchise that probably didn't deserve a second; I've seen them all and feel no compulsion to revisit any of them (except maybe the first, but only because Asia Argento). This is a series that's being willed into being by some producers hungry for a franchise or by Vin Diesel, who twice walked away from the series that made him a star so as to not get locked into doing just one thing and twice returned because he realized that the one thing is how audiences want to see him. This isn't like the Riddick franchise, though, which is a clear labor of love for which Diesel exhibits a real passion (and which endears him to me with his nerdiness totally lacking in irony). This seems purely driven by a desire to package something profitable. If they do end up making another one, I really hope they go the ensemble route -- the casual representation and diversity here is just as heartening as it was in Rogue One even if it's getting none of the same credit (which may be because Rogue One starred a woman as its main hero and this one stars a pan-racial Golem in a fur coat). Maybe next time they can also make it a little less stupid.