Here's some stuff to watch when you've finished not seeing A Dog's Purpose. 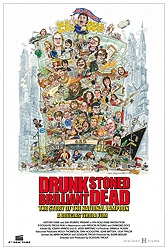 Drunk Stoned Brilliant Dead: The Story of the National Lampoon (2015, dir. Douglas Tirola) If you're any kind of comedy nerd, this is essential viewing regardless of whether or not you ever read National Lampoon. Completely constructed from interviews and clips from National Lampoon magazines and radio/TV productions, the movie tells a very clear story of the rise and fall of one of the most significant and influential comic institutions of the last 100 years, which doubles as the sad tale of magazine founder Doug Kenney. It's also really, really funny. All the old clips hold up. (Watch on Netflix) 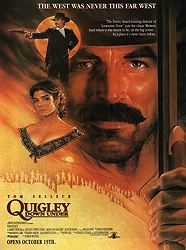 Quigley Down Under (1990, dir. Simon Wincer) I've gone on for years about how much I dig this movie, an underrated western that should have made Tom Selleck into a full-blown movie star. There's gorgeous photography of the Australian outback, a solid villain turn from Alan Rickman (at a time when he was doing a lot of these kinds of parts), an amazing Basil Poledouris score and, of course, Laura San Giacomo. This is one of those movies that I have to watch whenever I stumble upon it on cable, which happens a lot. Simon Wincer is a really under appreciated director, and this is my favorite of his movies. (Watch on Hulu) 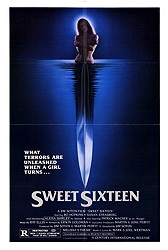 Sweet 16 (1983, dir. Jim Sotos) Weird little slasher mystery in which a high school girl (Aleisa Shirley) starts attracting a lot of attention from boys as her 16th birthday approaches, but then each of those boys is brutally killed. Bo Hopkins plays the town sheriff investigating the murders and Dana Kimmell (Friday the 13th Part 3's Final Girl) is his daughter, a mystery junkie who wants in on the case. There's a really weird sexuality to the film, which goes out of its way to tell us the heroine is only 15 and then proceeds to have her naked a whole lot, and the murders are surprisingly brutal for a movie that seems to be more mystery than slasher. The mix is kind of fascinating, though, and the results feel just different enough for the early '80s period to warrant a recommendation. Instead of spending $30 on Code Red's Blu-ray, you can check it out in HD on Amazon Prime. The transfer is great. (Watch on Amazon Prime Video) 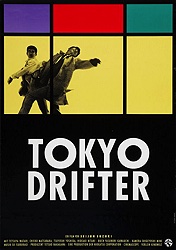 Tokyo Drifter (1966, dir. Seijun Suzuki) The work of Japanese cult filmmaker Seijun Suzuki can be an acquired taste, but I feel like even those unfamiliar with his special brand of crazy can appreciate Tokyo Drifter. It's about a former yakuza hitman (Tetsuya Watari) who has given up the life and is now being hunted by assassins. It's super stylized, as most of Suzuki's work is, but also gorgeously colorful and prone to the occasional musical number. Good luck getting the theme song out of your head for the next week. (Watch on Filmstruck) 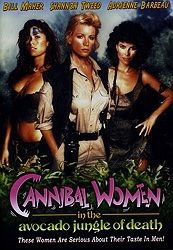 Cannibal Women in the Avocado Jungle of Death (1989, dir. J.F. Lawton) Despite being aware of this movie all my life because it has such a memorable title and played regularly as part of the USA Up All Night lineup, I only recently saw it for the first time. It's legitimately so much funnier than I expected. Shannon Tweed, in a rare fully clothed role (I think this was right before the start of her run as the queen of the erotic thriller), displays solid comic timing and a screen presence that makes me wish she had a different career. This also features a rare starring role for Bill Maher, who is funny as the butt of many jokes and whose smarmy face is as punchable as ever. The movie was written and directed under a pseudonym by J.F. Lawton, a good screenwriter whose later credits include Pretty Woman and both Under Siege movies. That helps explain why it's actually funny instead of just self-satisfied and stupid, which is what I was anticipating. (Watch on Full Moon Streaming) 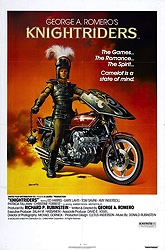 Knightriders (1981, dir. George A. Romero) I'll be honest: I don't really want to think about the possibility of George Romero ever passing away. But I know he's getting up there in years and that the world seems bent on taking everyone good and leaving us with only human garbage, so it is an inevitability. When that horrible day comes, the first movie I'm going to watch is Knightriders, his inexcusably underrated opus about a group of bikers who act as King Arthur and the Knights of the Round Table at Renaissance Fairs. It's the movie that feels like the mission statement of his career and a sad treatise on the passage of time. Ed Harris is the super principled leader -- a stand-in for Romero himself, who has been making movies for 50 years and has refused to sell out -- and Tom Savini gives a really strong dramatic performance as his second in command. The movie is long and has its own unique pace, but really suggests that Romero could have had a career outside the horror genre had things worked out a bit differently. Not that I'm complaining about how they did work out. (Watch on Shout Factory TV)
Posted by Patrick Bromley at 12:00 PM