Off the Shelf: Driller Killer (Blu-ray) 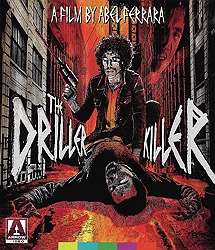 Abel Ferrara isn't just a madman. He also plays one in movies.

There are very few "name" filmmakers more punk rock than Abel Ferrara, a guy who doesn't give a shit about any of the politics of Hollywood and makes movies that only he can make. He's unconcerned with having big box office success (beyond what will allow him to make another movie) and makes real art, albeit most times within a framework of genre and exploitation cinema. With a handful of great films to his credit (Ms. 45, Bad Lieutenant, King of New York) and a couple others that are quite good -- or, at the very least, interesting -- Ferrara is a filmmaker whose work is always worth seeing even when it doesn't completely work. He's a true original. 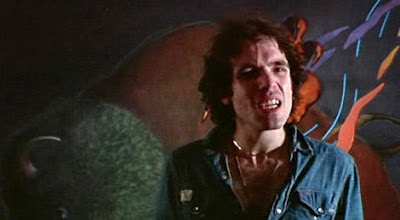 In its way, Driller Killer is a perfect encapsulation of its period, as it's a movie that really couldn't exist at another time or place. It combines the New York art scene, the early days of the post-punk New Wave scene and a specific kind of 42nd Street sleaze to create what is at once a semi-pretentious experimental film and a cheap, gory slasher. It's the kind of movie at home in both the arthouse and the grindhouse. Therein lies its charm. Adding to the fun is the fact that it's Ferrara playing the titular Driller Killer; he's a guy who always seems just one bad day away from becoming completely unhinged -- his movies reflect that -- and so watching him run around and take out all of his frustrations on humanity with a power drill is perversely thrilling. I like, too, that most of Reno's victims are male, as it eliminates the kind of ugly misogyny that once finds in the gritty New York-based slashers released in Driller Killer's wake (and adds an interesting psychosexual component; while there's nothing explicitly homoerotic about the character of Reno, it's impossible to watch him plunge his phallic weapon into a bunch of men and not read something into it). Don't get me wrong; there is still some gross and sleazy misogyny -- the shots of two women showering together don't exactly advance the story -- but at least it's not always directly tied into the violence. When it comes to exploitation movies, you have to take your wins where you can find them.

Driller Killer arrives on Blu-ray courtesy of Arrow Video, who have given the cheap 16mm film an impressive 4K restoration and included two cuts -- the 96-minute theatrical version and a 100-minute "pre-release" version -- in two possible aspect ratios: a 1.85:1 widescreen and a 1.37:1 full frame option that adds a little information to the top and bottom of the frame. Perhaps even more entertaining than the movie itself are Arrow's bonus features, starting with a new commentary by Ferrara and moderator Brad Stevens. On both the commentary and the 20-minute video interview, Ferrara is totally outspoken and uncensored in everything he says, lending the conversations about the film and his career a refreshing honesty. I could listen to him talk all day. Also included is a visual essay about Driller Killer, the original theatrical trailer and, best of all, appearing on home video for the first time is the feature-length documentary Mulberry St. that Ferrara directed in 2010 covering the New York locations where he made his movies. A standard definition DVD of the movie is also included. 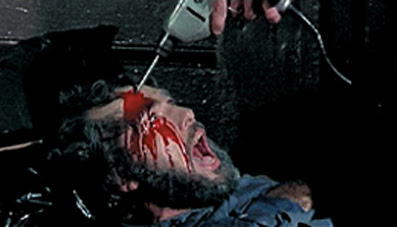 Best recommended for fans of either Abel Ferrara or New York-based exploitation from the Golden Age of that sort of thing, Driller Killer is an interesting look at the early work of a director who would refine his voice to better effect just one movie later with Ms. 45. Arrow's Blu-ray restores the film to better effect than anyone could possibly hope, offering multiple ways to view the movie and a collection of extras that celebrate Ferrara as a filmmaker in a really cool way. Plus a lot of people get killed by a drill. Gotta love that kind of truth in advertising.