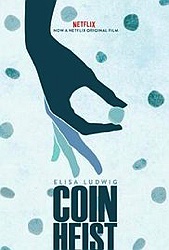 I have been eagerly awaiting the next movie from writer/director Emily Hagins since seeing her last film, 2013's Grow Up, Tony Phillips, on the very first night of the very first Chicago Critics Film Festival. Hers is a career I have followed since Zombie Girl: The Movie put her on my radar -- the 12-year old with a feature film already to her credit and a bright future ahead of her. I've watched her grow and improve as a director over the course of the next 10 years and several features (though her 2009 movie The Retelling is impossible to come by, and Hagins admitted on a recent episode of The Movie Crypt podcast that she plans to keep it that way). Tony Phillips represented a big leap forward in both craft and in balancing a delicate tone, so I was excited to see where Hagins would go next.

Her new Netflix Original movie, Coin Heist, is another creative leap: it's her best looking, most polished film, one that no longer carries any of the "child prodigy" baggage and feels like it could have been made by any professional filmmaker. This is a double-edged sword, of course. With over a decade of experience, five features and an anthology segment under her belt, Hagins is very much a professional filmmaker. She knows how to tell a story, and better yet knows how to pull the emotional beats out of said story to make it resonate beyond the plot. The flip side of that Coin Heist, however, is that there's something a little impersonal about her latest effort. It feels more like a for-hire job than her past work, probably because it is in some ways; instead of generating her own material, for the first time Hagins is adapting a popular YA novel by Elisa Ludwig. It's good work -- one that clearly wants to be honest about the teenage experience in a way that another director would probably ignore (and did, when Brian Robbins made The Perfect Score). But I'd be lying if I said I didn't miss the unique personality that Hagins brought to her other films. 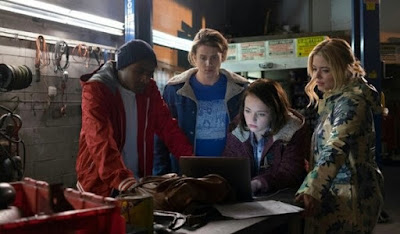 When the headmaster of a Philadelphia prep school is caught embezzling funds, all clubs and activities are shut down and the school is in danger of closing. A group of four students from different walks of life -- your basic Breakfast Club archetypes, though never nearly as broadly drawn -- band together to rip off the United States mint and make enough money to save the school.

For a movie with "heist" in the title, Coin Heist is almost totally uninterested in the actual heist -- a teenage Ocean's Eleven this ain't. Hagins' script is far more focused on the teenage drama that exists between all of the characters: these two used to date, these two like each other, this one has a mean boyfriend, this one feels like an outcast, etc. etc. etc. (having not read the novel, the same may be true of the source material, too). The investment the movie has in its characters helps supplant the lack of an interesting or exciting scheme; we want these kids to get away with their plan because Hagins has made sure we care about them as people. If there's a bummer to the approach, it's that what seems like it might be a fun and bouncy adventure -- kids have to steal coins! -- instead gets weighed down by the emo-ness of it all. No one really seems to have having any fun in Coin Heist. 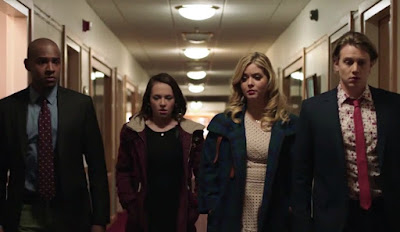 So much of the actual heist feels like an afterthought that I felt less tension in the will-they-pull-it-off-or-won't-they of it than I did in wondering if the band would be able to play the big dance. The movie is so focused on the smaller day-to-day problems of these teens that it can't work up much excitement for the more "movie" aspects. To Hagins' great credit, she is always sure to really listen and empathize with these characters, never allowing them to become teenage stereotypes when it very easily could have gone that direction. She clearly wants to portray young people who feel authentic, and between her adaptation and the actors' portrayals (which are authentic even though they veer into "mopey" too often), there is real attention paid to never condescending to both these young characters and what I assume is the film's intended young audience. Like the classic movies of John Hughes, Hagins has created a film that tries to reflect the way being a teenager feels, even when we adults know better.

What's missing is any levity, and with a lighter touch or at least the occasional comic bit, Coin Heist could be a home run. This, of course, is a case of me reacting to the movie I want it to be rather than the one that it is, but don't we all? If I see something and feel like a piece is out of place or missing, am I wrong to take note of it? This doesn't mean that the filmmaker has failed. Emily Hagins made the movie she wanted to make, and made a good version of that movie. But there are ways in which it didn't connect with me that her past efforts have, and I miss the specificity of the worlds Hagins' previous movies inhabit. Coin Heist is her most accomplished, most commercial movie and I hope it leads to more big opportunities. I just don't want her to lose her 12-year old self.