All the Pieces Matter: Inglourious Basterds 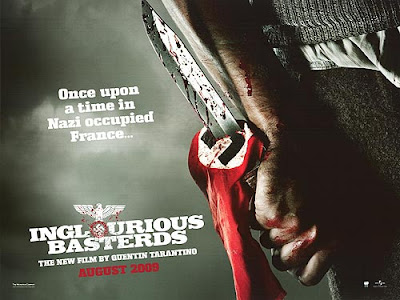 This may be a controversial opinion, but Inglourious Basterds is Quentin Tarantino’s masterpiece, his most effective synthesis of tone, style, and genre homage. While it’s totally reasonable to argue that films like Pulp Fiction and Kill Bill feature more memorable characters and more exciting action, Inglourious Basterds is his most seamless and concise effort, a confident and bombastic odyssey of rip-roaring revenge that never wears out its welcome.

Perfection is often a burden, though, and since each of the film’s five major movements is its own tiny symphony, it can be very difficult to choose one particular scene that best represents Basterds’ narrative goals and aesthetic wonders. Shosanna’s final revenge, for example, is a thrilling orgy of violence and mayhem. The pub scene — you know, “Auf wiedersehen to your Nazi balls!” — is a masterful one-act play about a goddamn rendezvous in a fuckin’ basement and the Mexican standoff that follows. Nevertheless, there’s one scene that might best serve our purposes, and it takes place Once Upon a Time in Nazi-Occupied France. 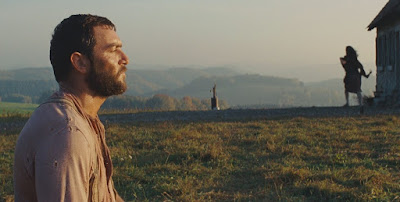 1941: Germany’s influence has spread throughout Europe, consuming all it touches and forcing families into hiding across the world. SS Colonel Hans Landa (Christoph Waltz), better known as “The Jew Hunter,” approaches the farm of Monsieur Perrier LaPadite (Denis Ménochet) and his family. We don’t know why this is happening, but Monsieur LaPadite seems to. A beautiful and foreboding shot framing him next to his chopping block tells us all we need to know. He’s known this was coming for a long time, even if he never believed it. He tells his daughters to act normally and side-eyes the colonel as he pulls up to their cottage and extends his hand in friendship. Landa is courteous and congenial, which is unexpected given that, you know, he’s a Nazi. This thickens the tension as LaPadite greets him with forced kindness and invites him inside. It’s here that Tarantino makes his first statement: he doesn’t have to convince us that Nazis are dangerous, but he does want us to understand just how terrified normal, everyday people were of their regime – especially those that may have something to hide. There’s a sense of invasion here, a fuse being lit that will run the length of the scene.

That sense of invasion gets more personal as Landa makes himself at home. Like the best villains, he comes with a smile, and the juxtaposition of demeanor and intent makes him truly horrifying. He begins by objectifying LaPadite’s daughters, giving them a slimy once-over and insisting that the rumors of their beauty are true. Landa knows what he’s doing here, asserting dominance over LaPadite by sexualizing his children. It’s a subtle way of showing that he’s entitled to anything the Frenchman owns, an echo of the Nazi occupation of his country. Note how desperately accommodating the family is during this whole affair; the last thing they want is to stand out. Landa’s warmth is palpable — and it’s entirely possible that their anxiety is unfounded — but we still get the feeling that the other shoe is about to drop. Landa then raises the stakes, asking the daughters to wait outside while the men talk. Tarantino is flashing his calling card now, settling us in for one of his long, expository monologues (think Jules’ Big Kahuna Burger scene in Pulp Fiction or Bill’s Superman monologue in Kill Bill).

We’re cruising into the second act now, anxious to see what Landa does next. Now that he’s stripped LaPadite of his support, he asks permission to speak English. This does two things: it further emphasizes Landa’s control over the situation and signals to English-speaking audiences that they should pay close attention. It’s a great way to raise the stakes without adding unnecessary action. As they discuss Landa’s reputation (thus explaining it to the audience), Tarantino closes us off from the door, shooting this particular part of the conversation from closer, more intimate angles accented by his now-famous center spotlight. This change is also conveyed tonally: LaPadite answers Landa’s questions more comfortably and confidently than before, feigning relaxation and trying to behave like an equal. “Just be calm and this will all be over soon,” he tries to tell himself. As he lists the names and ages of the long-forgotten Dreyfuses, the camera dollies dramatically, rotating the visual axis of the scene back toward the door. Then, while LaPadite pretends to forget Shosanna’s age, it ducks down below the floorboards and reveals the family stowed away beneath them. And now we get it.

Suddenly, the entire scene congeals. We know, deep down, that Landa is going to find these people. The basic visual language of film demands it. This dramatic irony sucks all the air out of the room as we finally realize how foolish this Frenchman has been. Tarantino knows he has our attention now, so he starts fucking with us by letting Landa go into his whole Jew Hunter spiel while we hyperventilate. Note again that he cues the change in dynamic visually: we’re now facing the other side of the house, and light is pouring in through the windows. The tables have literally turned. He mixes in a few low-angle shots, too — not only are we scared for the Dreyfuses, we’re seeing things from their point of view. One last visual gag: the comically-large pipe, which, of course, is just Landa slapping his dick on the table in victory. “You are sheltering enemies of the state, are you not?” Close-ups now, slow push-ins back and forth. LaPadite’s facade collapses (Ménochet is seriously great in this scene) into a mix of sadness and relief. He quickly points out the Dreyfuses’ hiding spot and resigns himself to whatever punishment awaits him. Landa doesn’t miss a beat; this is what he came for, and now he’s going to get it. 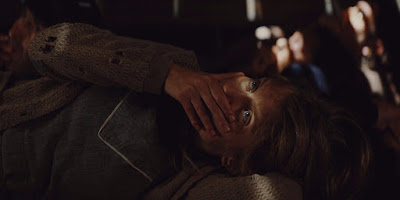 They drop the bullshit and Landa rises from the table, commanding LaPadite to follow his lead before switching back to sing-songy French. This is digging the knife deeper, since both characters and the audience now fully understand the extent of the masquerade and what it’s all leading to. Note how Tarantino frames them both within the windows, using the light to draw our attention to their faces. This final movement pays off everything he’s built throughout the scene: the juxtaposition of kindness and villainy, the language barriers that create conflict, and the cruel precision of the Nazi’s violence. The score builds to a tense high note before everything explodes into shrapnel and wooden splinters; the bomb under the table finally goes off. Shosanna flees across the open field, masked dramatically within the doorframe. Tarantino cuts the inside lights here not only in service of a starker visual, but possibly to indicate that the soul of the home has gone out, that Landa has vanquished it forever. He steps outside, backlit and mythic, allowing the young girl to live to fight another day.

What are your favorite scenes from Inglourious Basterds? What else would you like to see covered on All the Pieces Matter? Leave it in the comments.