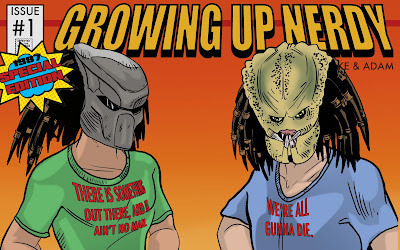 The Nerdy Boys are back for a very special 1987 week column!

Dear Growing Up Nerdy,
I miss you so much! Frankly, my life has just lost all meaning without a weekly column from you. With #Fthismoviefest coming this week, I was hoping that maybe we could get you two of you out of hiding to let us know your feelings about 1987? Please, Please come back, just to let me know you’re still around. I love you. I love you so much. You’re everything to me.
-Courtney

Adam: Well, with a message like that, I think that maybe we can break out the old typewriter for a few words. When I personally think about 1987, a few things come to mind: VCRs, GI Joe, one of my first celebrity crushes, the money Mike still owes me, and my father fast forwarding sex scenes.

I was most excited for one movie that year, and that was GI Joe: The Movie. 1987 was pretty much the tail end of my GI Joe obsession and I could not wait for the movie to come out. I watched it with a friend on my birthday and I was so excited. We got to see the origin of Cobra Commander, and so many of my friends seemed to be excited for it. Alas, though, I got older and my interest in the multitude of plastic toys I had accumulated became less important, and so did my interest in GI Joe. 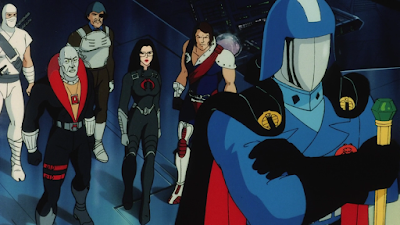 Now don’t get me wrong, I still saw a ton of movies that year. I just didn’t see them in the theater because 1987 was the year my family got a VCR (we were a little late to the game). Being the oldest, if my father wanted to watch a movie he recruited me to watch it with him. We would sit around and watch movies on Saturday nights and I got to see so many violent movies with the sex scenes fast forwarded. My father was a pro, like a hunter taking the safety off his rifle; the second the sexy music started, my father would pull out the remote but he wouldn’t pull the trigger—not yet. No, my father would wait, he’d give it a few seconds, and then BAM! That sex scene went from not being shown… to being shown really fast.

Not only did movies become a family affair, but it was the babysitter too. Later that year, my mom and dad went to a wedding and left me at my grandparents' house. They rented one movie for all of us kids and one for just me after my siblings went to bed. We watched Adventures in Babysitting and I got to watch Spaceballs for the first time… it was glorious. There were plenty of movies that were either off limits or that my dad had no interest in watching. If it wasn’t for the kid down the street, I wouldn’t have seen Lost Boys until I was 25 years old. Turns out my parents were onto something, though, because I couldn’t eat Chinese food for 10 years after watching Lost Boys because I was afraid it was going to start moving. Between my family and my friends, though, I developed one of my earliest celebrity crushes: Courtney Thorne-Smith. In what seems like only days between each other, I watched Revenge of the Nerds II and Summer School, and fell absolutely in love with her-- or about as much as an eight-year old can. I didn’t know her name and she went on to have a pretty great career, but to me she’ll always be “that girl from Summer School.” 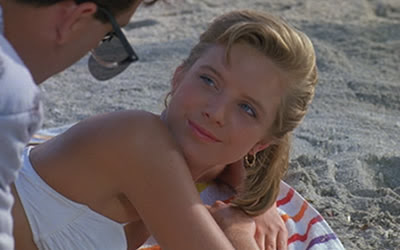 However I can’t talk about 1987 without talking about the street gang I was in with my best friend Mike (I say Mike because he hadn’t gotten the nickname “Ba” yet). Mike showed me the movie Predator for the first time, though I’m pretty sure he had watched it a minimum of forty times at that point. Together along with my brother and two other kids from down the street, we got together and called ourselves The Predators. We talked it over and the first thing that we needed to purchase for our badass street gang was walkie talkies. That’s right folks, it was walkie talkies or bust. We needed money for this so we put together a pool of cash. I put in $6. Weeks passed and so did The Predators. We never really became the suburban force that we thought we would be, probably because Mike never bought the walkie talkies. Here we are, 30 years later, and I don’t have my $6. That $6 compounded over 30 years, Mike owes me $187.68. So if you’re wondering why we don’t do Growing Up Nerdy regularly anymore, it’s because this motherfucker owes me money! I just can’t ignore it anymore.

Mike: First of all, I’d like to address what my “friend” claimed in his answer regarding the $6.00 he paid to be a part of The Predators. Did Adam give me $6.00 for Walkie-Talkies? Yes. Have I purchased them yet? No. Am I incredibly thorough in my research and holding out for the best possible Walkie-Talkies that The Predators deserve?? HELL YES. After this little tirade, however, there may be an opening in The Predators. If you’re interested, please attach your application in the comments below and donate $6.00 to F This Movie.*

As for 1987, I’d have to agree with what Adam said before he went off the rails at the end. 1987 was an amazing year for movies. It never occurred to me until I sat down to write this how much the films of that year are still very much about of my life today. Instead of picking just one movie to write about, here’s a rundown of how these movies impacted me at the time and even today:

- For years my sister Nicole, when calling me, would say, “Miiiichael” like EVERY CHARACTER does in The Lost Boys.

- When the phone would ring late at night my parents still turn to one another and say, “Who died?” thanks to Moonstruck.

- My wife, when repeating to me something that I keep forgetting to do, will lightly pat a nearby surface and in her best Frances McDormand impression say, “You’ve gotta do that, H.I..”

- I’ve written about it before, but A Nightmare on Elm Street 3 was my introduction to horror films, and began a pretty intense obsession with Freddy Krueger. 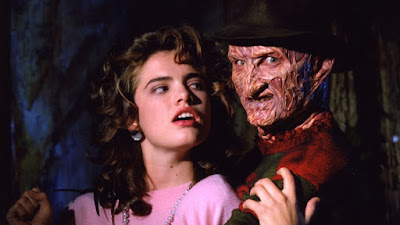 - I saw Good Morning, Vietnam the night before I started the fourth grade, and as I was brushing my teeth before bed I broke down crying as my parents mortality hit me like a ton of bricks. I have no idea why that was the moment, whether GMV hit me in a weird way, or anxiety about starting school the next day, or all of the above. All I know is I was using blue sparkling Crest toothpaste and the tears began to flow.

- Speaking of my parents, they took me to see Jaws: The Revenge in the theater (I am the youngest of seven kids; by the time they got to me they gave up trying to be appropriate adults). We were running late so we walked in as soon as the movie started. My mom left my dad and I to go get us popcorn, so 8 year old me had to give play-by-play to my blind father as (SPOILERS) Michael Brody was eaten alive by a great white. I haven’t seen that movie since and that’s about the only thing I remember.

- Thanks to Lethal Weapon, I witnessed my mom fan-girling for the first time over Mel Gibson. She had a lone picture of him from People Magazine that hung on our fridge for years. Her love of him decayed as he was exposed for the crazy person that he is. Luckily, Kit Harrington came along just in time to sweep my mom off of her feet. The King in the North!

- My wife Christy and I grew up next door to each other. We hung out when we were little kids and my fondest memory of going over to her house was when she brought me over to watch Adventures in Babysitting on Laserdisc.

- One of my earliest crushes was Ellen Barkin in The Big Easy. 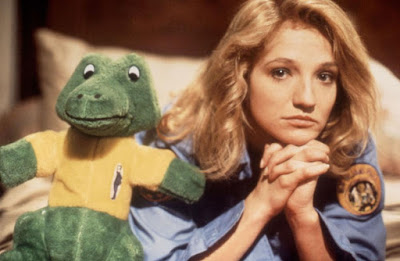 - I used to annoy the hell out of my family walking around the house saying, “Hark! I hear the cannons roar! Is it the king approaching?” from Radio Days. My Mia Farrow impression was tight.

- RoboCop, like Raising Arizona, is a movie I loved when I saw it in 1987, but appreciate even more today. In 1990 I became pretty obsessed with Marvel’s RoboCop comic books and at the time even wrote a RoboCop comic I dreamed of having Marvel publish. Alas, 12 year old Mike never sent it to the Marvel offices like I planned and the world will never see the adventures RoboCop and I went on.

- Like Adam mentioned before, Predator had a big impact on me. My brother was in the Marines and my mom had his dog tags hanging in our house. After watching Predator for the first time, I stole them and formed the super-awesome group known as The Predators. I predict you guys will hear big things from The Predators in 2017.

*Not sure if Patrick has mentioned it before, but all donations to the site are going towards the purchase of Walkie-Talkies for members of F This Movie!.
Posted by Patrick Bromley at 5:00 AM