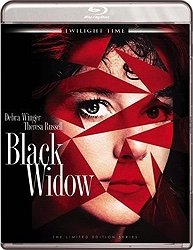 She mates and she kills.

Once upon a time, there were mid-budget movies made for adults. In the 1970s, that was the mainstream. By the 1980s, things began to fracture off a bit — there were blockbusters and cheap genre fare on opposite ends of the spectrum, but the middle class movie made for grownups was still a staple of the Hollywood system. It slowly began to dry up in the ‘90s and has all but disappeared in the 2000s, save for the occasional crop of awards bait contenders we get at the end of each yearly cycle. This makes a movie like 1987’s Black Widow something of a cultural artifact. 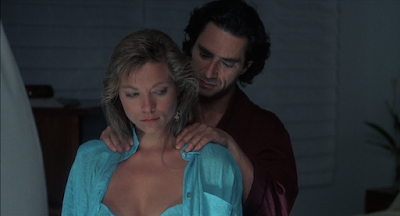 That’s too bad, because it’s a really good movie — the kind of character-driven noir that was right at home in the 1970s. That makes sense, as it’s directed by Bob Rafelson, a filmmaker who helped redefine Hollywood by producing Easy Rider and directing films such as Five Easy Pieces and The King of Marvin Gardens. Black Widow is one of only two movies Rafelson directed in the ‘80s (the other, his remake of The Postman Always Rings Twice, was released in 1980) and one of only 10 theatrical features he’s ever made. It’s a shame we didn’t get more movies from him, but I guess that makes the few films he did manage to direct that much more special…even when one of them is Man Trouble.

Black Widow stars Debra Winger as Alex Barnes, an agent with the USDoJ who zeroes in on a series of murders she believes to be committed by Catherine Petersen (Theresa Russell), a woman who marries wealthy men and then mysteriously kills them off before moving on and changing her identity. Alex goes undercover to Hawaii and befriends Catherine to find evidence of her crimes — or, even better, to catch her in the act. 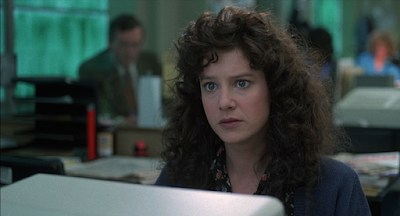 There is nothing showy about Black Widow, which might explain why it’s a movie best remembered by those who might have caught in on cable back in the late 1980s. At the same time, it’s a movie that is quietly remarkable. It’s a drama with two women at its center, which (as is pointed out on the commentary included here) was once commonplace but had fallen out of favor by the time this film was made. It predates the “erotic thriller” movement of the ‘90s about dangerous women playing psychosexual games — the one kicked off by Basic Instinct — but does so without being overtly sexual or graphic in its content (save for a minor scene of nudity, there’s hardly anything in the movie to even warrant an R rating, which is also pointed out on the commentary). The script by Ronald Bass upends many of the tropes we’ve come to predict from stories like this. There is an erotic undercurrent to the relationship between the two leads that never becomes text, as Rafelson resists the urge to be exploitative or lascivious. There is little mystery as to whether or not Catherine is a murderer. There’s even little mystery as to whether or not she will discover Alex’s true identity. This is a movie about smart characters and gives the audience credit for being smart, too.

Black Widow comes to Blu-ray courtesy of Twilight Time (licensed from Fox) in a limited run of 3,000 units. They’ve done their usual great work with the technical aspects of the disc, offering a very strong 1080p transfer that carries a huge amount of detail and a wonderful film-like grain structure throughout the movie without ever turning into a lot of swirling digital noise. The lossless stereo audio track mixes the dialogue with Michael Small’s very good score — a score which, like on all of Twilight Time’s releases, is offered isolated on a separate audio track. The other bonus features include a trailer and some TV spots as well as a casual but informative commentary from Twilight Time’s Nick Redman and Julie Virgo, both of whom have very positive things to say about a movie they rightfully feel deserves more attention. 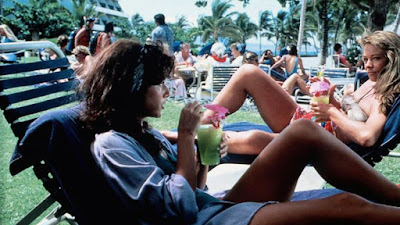 It’s a bummer that films like Black Widow aren’t made much anymore, but at least there are labels like Twilight Time attempting to rescue them from relative obscurity and restore their reputations. It may not have left a huge cultural impact, but it boasts moody direction, a smart script and two excellent performances. If that’s not why we go to the movies, I don’t know what is.

Posted by Patrick Bromley at 11:30 AM