This week, we may have hit rock bottom.

We are all interested in bad movies, inexcusable cinema, and naked ladies carrying camping equipment, for that is the stuff we use to fill the empty spaces in our pants. You are interested in the unknown, the unexplored, and the uninteresting—that is why you are here. And now, for the first time, we are bringing to you the full story of some of the worst movies ever made. We are bringing you all the evidence, based only on the secret testimony of the miserable soul who survived a screening. I am that miserable soul. The bait-and-switch advertising, the craven motives of the film’s producers, the chicanery behind every frame—my friend, we cannot keep these a secret any longer. Let us punish the guilty. Let us reward the innocent. Remember, my friends: terrible movies such as these will affect you in the future!

Forbidden Adventure is a con. Forbidden Adventure is the work of very devious showmen, trying to put one over on the Production Code and every member of their imagined audience. I am not one to pat myself on the back, but in the last year, I have watched (and read so much about) these awful movies that as Forbidden Adventure unspooled before my tired eyes, I shouted, “Dwain Esper and Dan Sonney had something to do with this picture!”

Released in 1935, Forbidden Adventure began its life as Angkor, a silent documentary about Cambodia. Dwain Esper (wunderkind producer/director behind such opuses as Sex Madness and How To Undress For Your Husband) bought the rights to the footage, added a prologue in which the film is being shown to the “Los Angeles Adventurers’ Club”, and dropped in some awful narration to stitch it all together. He then hired quasi-director George M. Merrick to shoot some new scenes on a Hollywood back lot featuring naked “native” women. (Actually, there is some evidence that Esper never bought the rights to the picture—but that he and an associate merely stole it from a processing lab.) When the Production Code Office demanded cuts because of the film’s copious nudity, Esper sent them a revised version, which earned a Production Code Seal of Approval. Esper then released the uncensored version, which played for decades on the “States’ Rights/Roadshow/Ballyhoo” circuit, overseen by showman extraordinaire Dan Sonney. 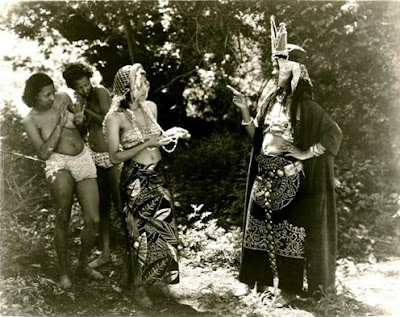 The Plot In Brief: Noted big game hunter Wilfred Lucas exhibits a special film for members of the Los Angeles Adventurers’ Club. He explains that two intrepid gentlemen, who later died in World War I, shot the original footage in Cambodia. Using their footage and notes, the film we are about to see was cobbled together with newly shot footage. What follows is a schizophrenic montage of fascinating documentary footage of Cambodia, endlessly interrupted by new scenes featuring explorers with greasepaint beards wandering the jungle while topless women carry their supplies. The original documentary footage is a surprisingly interesting look at a lost culture and time period; the new footage looks like outtakes from a silent slapstick comedy in which Mack Sennett’s famous Bathing Beauties apparently “forgot” their bathing suits at home.

According to the liner notes on the Something Weird DVD, the “native women” in the “recreated” footage were recruited from an infamous L.A. house of prostitution. (Apparently no one at the time could distinguish women of African descent from women of Cambodian descent, because racism.) A man in a very convincing gorilla suit shows up in the jungle sporadically to liven up the proceedings and ensure that the film could one day be exhibited with an alternate title (even though THERE ARE NO gorillas in Asia, which is where Cambodia actually IS, so why didn’t the filmmakers do their homework oh yeah because this movie is mostly about seeing boobs.) 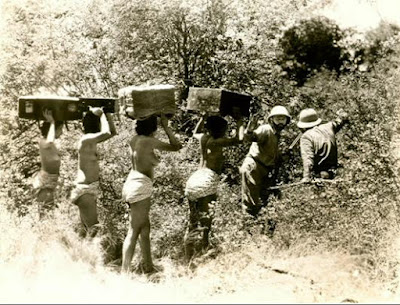 Forbidden Adventure is further proof of the lengths some people would go to in order to make and show movies featuring nudity in the 1930s and ‘40s. Whether marketed as a travelogue, an exposé, or a jungle melodrama, the “appeal” of this film lies in its copious partial nudity. Occasionally, an overlay of optically added branches obscures the content of the frame that the ravenous male audiences had paid their good money to see. But why—so the filmmakers could pretend they did NOT create a film whose main feature was lady tops?

This film does not deserve to be lumped in with other bad films; it deserves to be lumped together with sticky National Geographic magazines found in the woods and the torn-out lingerie pages of an old Sears & Roebuck catalogue. 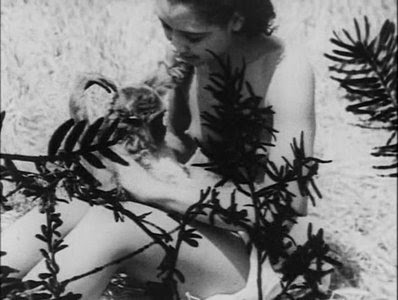 Forbidden Adventure is yet another of these gems leased to motivated showmen on the “States’ Rights/Roadshow/Ballyhoo” circuit, a peculiar genre of film that (thankfully) no longer exists. Film companies would lease territory rights to various road-show exhibitors (i.e., swindlers/conmen) who would arrange screenings at local theaters for a week or two, promote the shit out of them (often as thinly-veiled “travelogues”), then split the proceeds with the theatre owner and move on. These “showmen” were not shy about changing movie titles every few months to create the illusion of new product. At various times, Forbidden Adventure was exhibited under the titles Beyond Shanghai, The Tragedy of the Jungle, and Gorilla Woman! To paraphrase Lenny Bruce, the deceit and larceny in the hearts of these exhibitors is… thrilling. 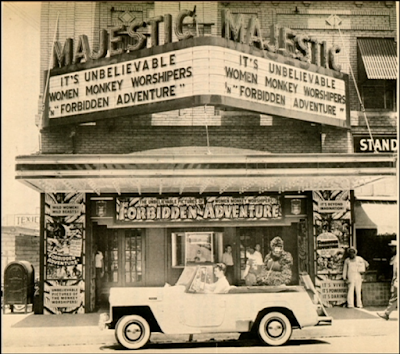 My friend, you have now read this column, based on my own sworn testimony. Can you prove that this film doesn’t exist? Perhaps on your way home, someone will pass you in the dark, and you will never know it, but he may be Dwain Esper, the auteur behind this piece of crap. Many scientists believe that bad movies are being filmed at this very moment. We once laughed at gorillas, native rituals, half-nude women carrying luggage, and more gorillas. So much laughter! And now some of us laugh at very bad movies. God help us in the future!