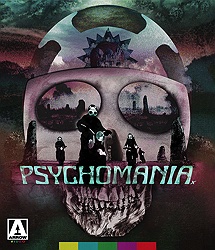 Ride with the living dead!

The 1973 British horror movie Psychomania (aka The Death Wheelers) is a very different kind of zombie movie. No one in it eats brains. There's no rotting corpse makeup or even much bloodshed; if you didn't know better, you wouldn't know which characters were dead and which were alive. This, of course, is very much the point. At a time when American exploitation filmmakers were turning out undead gut munchers and wild biker pictures, leave it to the Brits to combine the two genres into something totally unique and downright existential. I can't say as I've ever seen a movie quite like it. 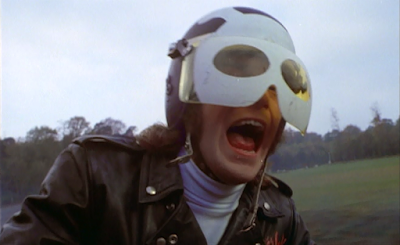 The English motorcycle gang "The Living Dead" loves wreaking havoc and dabbles in black magic. Their leader, Tom (Nicky Henson), enjoys an unusually close relationship with his mother, a medium with the ability to converse with spirits beyond the grave. Believing that the way to immortality is to die and be brought back, Tom and the rest of his gang begin committing suicide and discover that they can return to life as more or less immortal -- having died once, they cannot be killed a second time. But when Tom tries to convince his girlfriend Abby (Mary Larkin) to follow him into the afterlife, things get complicated for the Living Dead. Oh! I get it. The "Living Dead." It works two ways!

Psychomania is such an unusual film. I guess it's technically a horror movie because it involves black magic and the reanimated dead, but there's nothing especially horrifying shown. The bikers come back intact and proceed to cause trouble, apparently influenced more by Alex and his droogs than by George Romero. It's the kind of movie that must have seemed destined for cult status immediately upon release; it's hard to characterize but speaks directly to a very specific audience. It comes by that cult status honestly, too, predating the kind of cynicism that would eventually drive filmmakers to try and engineer a midnight movie rather than letting the audience discover and embrace it on their own. Prior to this Arrow Blu-ray, the film wasn't really even on my radar, and yet I know some lifelong horror lovers (like Blumhouse's Rebekah McKendry) who include it on their list of all-time favorites. It's a movie that's weird and cool and totally charming. 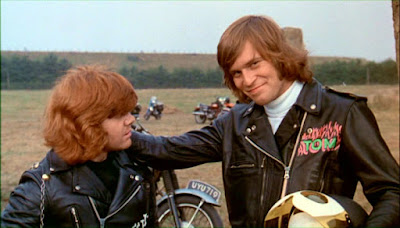 Discoveries like Psychomania are my favorite thing about this new era (era) of classic cult, genre and exploitation movies getting Blu-ray releases. While the selection is more limited than in the wild west days of VHS, I like that there are labels curating specific titles such as this and presenting them better than they've looked since their original theatrical runs. I like Pyschomania is a spin on the zombie movie, as a biker movie (there are some cool ass stunts), and as a gang movie. If nothing else, the movie should be seen for the performance of Nicky Henson, who has the wiry, electric energy and swagger of a young Mick Jagger. If you're already a fan of the movie, Arrow's Blu-ray ought to make you very happy. If, like me, it's a title that's new to you, definitely try to check it out. It may not become your favorite movie, but at least you'll see something cool and different.