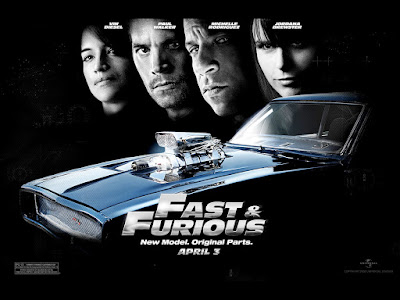 Every family goes through some growing pains.

Every major blockbuster franchise gives different things to different people. Some go to the Marvel Cinematic Universe, for example, for its densely-woven serialized narrative. Some go to see their comic book heroes writ large in live action on the silver screen, a kind of joyous reaffirmation of the fading idealism of their adolescence. Some go because Chris Hemsworth is just a pretty, pretty man. Same with Bond, Harry Potter, The Lord of the Rings, etc. The Fast and Furious franchise is no different: You love speeding cars and Yakuza blood debts, so you’re into Tokyo Drift. I prefer a good ensemble heist film, which makes Fast Five more my bag. What any Fast fan worth their salt can agree on, however, is that they’re at at their best when the Family’s interpersonal chemistry is fueling action insanity. Why, then, does no one talk about* 2009’s Fast & Furious, the film that leaves shallow swagger behind and doubles down on the unabashed, unapologetic sincerity that would come to define the rest of the series?

Picking up five years after The Fast and the Furious, Dominic Toretto (Vin Diesel) and his band of merry men (including Michelle Rodriguez as Letty and Sung Kang as Han, First of His Name, King of the Side-Eye and the Potato Crisp, The Coolest Motherfucker To Ever Walk This Planet Earth) have stolen their last DVD player. The heat’s too intense, and the group disbands to avoid capture. Months later, Dom returns to L.A. to mourn Letty’s sudden death** and finds himself pursuing Arturo Braga (John Ortiz), the Mexican drug lord with her blood on his hands. Meanwhile, FBI agent Brian O’Connor (Paul Walker) is also pursuing Braga, and the two former brothers-in-arms reunite to avenge their friend and bring Braga to justice. While they bicker over which one broke the other’s heart more, they’ll compete for a spot on Braga’s driving team, spar with the beautiful and dangerous Gisele (Gal Gadot), and make amends with Mia (Jordana Brewster) in hopes of bringing their family together again. 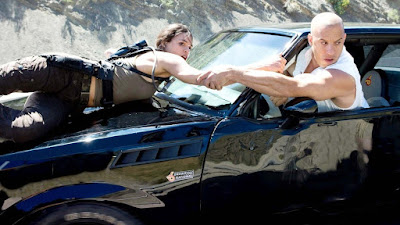 Fast & Furious functions primarily as a soft reboot of the Fast series, which until that time had lacked a real identity: The first film was just Point Break with cars instead of surf boards. 2 Fast 2 Furious pushed Brian as the franchise lead (replacing Diesel with Tyrese Gibson as the similarly-bald Roman) with varying results. Tokyo Drift abandoned the characters completely, making the cars the focus and pushing the series toward a direct-to-video anthology-type affair. But with Fast & Furious, director Justin Lin and series writer Chris Morgan weave some real (well, real for this series) emotional stakes in with the scowling bravado and gratuitous bikini shots. Brian and Dom find their moral codes in question — Dom seethes with anger, crushing bones and dropping drug runners out of windows while Brian tests the limits of his commitment to American Justice (when Mia asks him to explain his code of ethics, Brian responds, “I’m working on it”). Both men dance with the devil in the pale moonlight before settling on a life driven by violence but defined by purpose, a commitment to each other on which the series will rest until Brian drives off into the sunset in Furious 7.

It’s also the only film in the series that presents Brian and Mia’s relationship as one between two real human beings who sort of kind of want to know things about each other. In the first film, they were both just really hot people who wanted to bang (not that there’s anything wrong with that). In this one, they’re battered and a little broken, forced to decide whether or not a couple with five years of unresolved baggage and potentially incongruent ideologies can possibly have a future together. This is Jordana Brewster’s high point in the series, for sure.^ While Mia Toretto remains the most poorly-served character in the Fast family — having Brian’s baby apparently robbed her of both personhood and plot utility — she does carry a few memorable scenes in Fast & Furious (and even gets to drive at the end!). And again, you may not come to the Fast series for human beings. Many cited Fast & Furious’ darker tone and labored melodrama as a serious strike against it. That’s completely fair. But this film builds the scaffolding for all the tears we’ll shed at the end of Furious 7, making it incredibly significant overall. 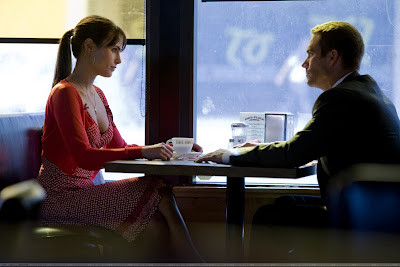 Also significant is that Fast & Furious honors the series’ perfunctory commitment to street racing while simultaneously ramping the dynamics up a bit. This film dispenses with the traditional quarter-mile as Dom and Brian instead race for supremacy in open traffic, guided to an unspecified target by GPS. It’s not the most intense or interesting race of the series, but it’s nice to see a conscious effort to write scenes that actually matter. The street race is usually shoved into a Fast film through some story contrivance about finding a car or meeting a bad guy. This one provides Brian and Dom an opportunity to renew their rivalry while moving the plot from one stage to the next (in this case, making Dom the new man on Braga’s team so that he can double-agent for Brian). For sure, the action in Fast & Furious is some of the most underwhelming of the series, but it’s worth sacrificing spectacle in this particular entry because of all the character work going on. We’ll get to all the safe-dragging, plane-chasing, God’s-Eyeing schlock soon enough. 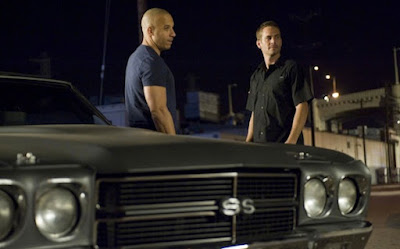 There’s a nice moment in Fast & Furious where Mia, Brian, and Dom share some Chinese food around a small table. Everything is a mess. Everyone hates each other. No one talks. Dom reaches first, and Mia reminds him that reaching first means you have to say grace. There are still rules. They’re still a family. Despite everything Brian has done — including breaking his sister’s heart — they’re still brothers, a bond Dom reaffirms when he sacrifices his freedom to help Brian and face justice for his actions. By repaying his friend’s own selfless gesture from five years earlier, Dom solidifies what all this speed and ferocity is supposed to be serving in the first place. Letty’s death (while super lame and obviously not meant to last) sets up a solemn commitment to each other that will drive the group from here on in. Best of all, the ending prison bus attack (a nice bookend with the film’s opening sequence) is one of the best-earned emotional beats in the series. Fast & Furious might not rank among your favorite Fast films, but it does a ton of the heavy lifting that makes the rest of them so glorious.

*The lowest RT score of the series? Are you shitting me?

** Spoilers except not spoilers because this part is LAME.

^ I know that isn’t saying much, but we’re grading these films on a curve, aren't we?