I didn’t vote for him.

Rob: And I didn’t see the movie. See you next time.

Adam: Way to alienate your base. It’s ok, family, he don’t love you like I love you. I took a solemn vow to cover thy summer, and that includes Guy Ritchie’s latest box office catastrophe. I got you.

King Arthur: Legend of the Sword is an updated take on the King Arthur legend. After King Pendragon (Eric Bana) is betrayed by his black magic-practicing brother Vortigern (Jude Law), the king’s son Arthur is cast off to be raised in the back alleys of downtown Camelot. Once he grows to a be a man (played by Charlie Hunnam), he proves to be the only one that can threaten Vortigern’s diabolical reign over heartland Camelot. Will Arthur pull the sword Excalibur from stone and reclaim his birthright? Is this a bit of a poo movie? Yes to both.

In this clip, Arthur tells his crew to retreat and they’re all like “Nope,” but then Arthur (of “he who would be king” fame) puts two hands on his steel and the film becomes King Arthur: Cheat Code because the live-action stops and is replaced by a CGI shit cloud with virtual Hunnam eviscerating his adversaries without them being able to land a single blow.


This clip is a good example of the bulk of the film’s action sequences and overall tone, which is that it’s too boring to care about but too loud (visually and audibly) to sleep through. The film culminates in a boss battle between a CGI Arthur (even though there’s a real Hunnam RIGHT THERE) and a Super Shredder version of Vortigern that looks like a combination of the bad guy with the skeleton mask from Willow and the lava monster from the Marines commercial from about ten years ago. All weight to these sequences is forfeited for visual effects and speed ramping, and most of it (save for an exciting pre-title sequence that’s fun) lands with no impact.

Besides the opening sequence, which is a flashback to Eric Bana kicking ass against a caravan of monstrously sized elephants and a pulsating score, there’s not much that I can recommend about Guy Ritchie’s film. I am not a hater of the writer-director (I’m down the middle on most of his movies except for Lock, Stock and Two Smoking Barrels and Snatch, both of which I liked when they came out) but here he directs King Arthur in sort of a way that is oblivious to the progression of the modern blockbuster. To borrow a phrase from Patrick Bromley, this movie feels like it should have come out in the year 2000 or around the time of 300 at worst. It’s very reliant on “cool” special effects that have not been cool for at least ten years because of overuse in other films. The dialogue is quippy (especially among Arthur and his merry knights) to adhere to the Guy Ritchie formula, but the freshness is gone and now it just feels like a bunch of old guys who are too old for the bar telling inside jokes to each other while the millennials look on and roll their eyes. 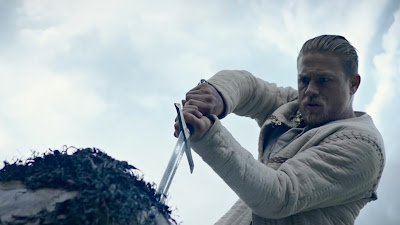 I expected more from the cast to be honest. Faring best are Bana, who is underused but still an interesting screen presence even if he never really panned out like he should have, and Jude Law as a fun villain that goes all the way in his evilness until he’s replaced by a CGI avatar. Law’s scenes are the only ones where you perk up and take notice after the first act. The rest of the time I sank into my seat while I watched scene after scene of Charlie Hunnam try to act like the baddest ass in the room. To be polite, I do not understand the appeal of Charlie Hunnam. Actually, let me rephrase; I don’t know what happened to Charlie Hunnam. In the television series Undeclared and in the film Green Street Hooligans, he was charismatic and cool. But then something happened and now in most films he sounds unsure of how to play every emotion and has grown into nothing but a posturing vessel that is uncomfortable to watch. Granted, I hear he’s great in The Lost City of Z (which I have not seen because of my James Gray allergy), so I wish him the best. As for the rest of the cast, Astrid Bergès-Frisbey is The Mage (I think she’s also Guinevere but I may be wrong) and she isn’t really given anything to do, unfortunately. Djimon Hounsou provides reliable support as Sir Bedivere, but it’s depressing to see the actor that was once a lead has now been relegated to another deep supporting cast part that has been his existence in the last several years (e.g. Guardians of the Galaxy, Seventh Son, Furious 7, The Legend of Tarzan). 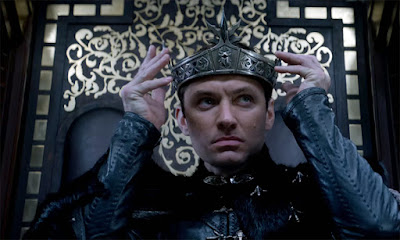 King Arthur: Legend of the Sword is not terrible or annoying to watch, but it’s a boring and forgettable exercise I wouldn’t remember if not for writing about it. The film is at its worst when it tries to be funny. For example, there’s a scene where the knights are standing around the round table of the Arthur legend and they’re all “Is this a wheel? How did you get it into the room?” and Arthur says (as a punchline) “It’s a table. You sit at it.”

In closing, if you want to be entertained by this film it’s better to just go the Trivia section of its IMDB page. My two favorite bits of information are as follows:

1. This is planned to be the first in a six film franchise. Yeah, that’s not gonna happen.

2. Hunnam beat out Henry Cavill and Jai Courtney for the lead role after threatening to physically fight them both for director Guy Ritchie. When your casting options are limited to those three, I ask, why not think to yourself “Maybe we shouldn’t go ahead with this movie if these are our options.” 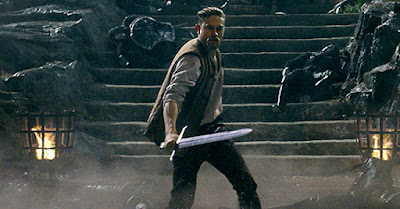 This project seemed misbegotten from the beginning. I feel bad it did so terribly at the box office this weekend (I rarely root for a movie to fail) but seriously, how was this ever a good idea?

Join us next time when Rob returns and we’ll review Pirates of the Caribbean: Dead Men Tell No Tales. Until then, these seats are reserved.
Posted by Patrick Bromley at 5:00 AM