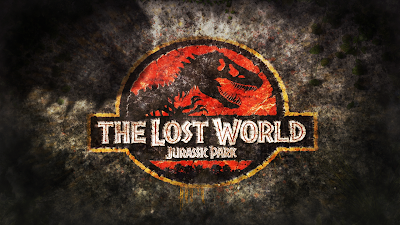 It’s well-documented on this site that the original Jurassic Park means a great deal to me. The first time I saw that movie in a theater was the most magical moviegoing experience of my youth. The Lost World: Jurassic Park earned its own superlative to me. It’s the most disappointing first viewing I’ve ever had in a theater. Such is my love for the original (and the idea of this IP) that I have probably seen The Lost World: Jurassic Park more than ten times in the subsequent years since its debut on May 23, 1997. I know I saw it in theaters twice in its first-run and once in its second run, each time refusing to believe the evidence that appeared in front of me: the thing that I love can also be the architect of my pain. I would later experience this phenomenon in multiple romantic relationships. Introspective baths were taken, restless nights were had, junior novelizations were read. I rationalized that my disdain for The Lost World: Jurassic Park was just me or my expectations; that I wasn’t seeing the movie for what it is. I was afraid to say it was bad out loud because only then these feelings became real. It felt like part of my identity was taken away. I was the Jurassic Park guy (the girls used to call me T. Risk). Who is the Jurassic Park guy who doesn’t like The Lost World: Jurassic Park? Just a guy. 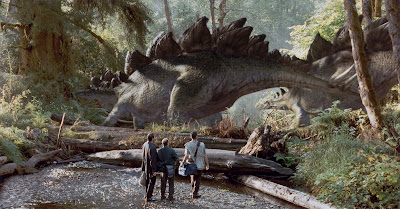 I have a theory that every movie has its own perfect day and time to watch it. For example, Jurassic Park is a Saturday at 1pm movie – a rollicking adventure matinee. La La Land is a Saturday night at 8pm movie – a delightful dessert of a movie to watch while you’re on air over that tiramisu you had an hour ago at Maggiano’s. The Lost World: Jurassic Park is a Sunday at 4:30pm movie, while it’s raining outside and you’re dreading Monday morning because you work at a job where you’re 50/50 on whether it’s better to go to the office or drive your car into the expressway divider because you’re out of sick days. Jurassic Park is Hawaii. The Lost World: Jurassic Park is the shittiest part of Wisconsin where people are still happy to see Paul Ryan. 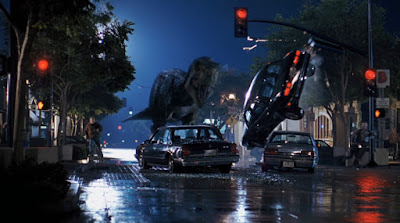 The Lost World: Jurassic Park begins its full-throttle fuck you assault on its audience by being the first movie to use the (at the time) new Universal Studios logo, which looks like a buffering computer virus has attacked your globe wallpaper. Anytime I see it in any Universal movie I’m tempted to turn the film off. If I had tens of millions of dollars, I would hire someone full-time to remove that logo from every one of my DVDs and Blu-rays.

The first scene of the movie epitomizes what a mean, shitty movie you’re about to watch with little Camilla Belle being attacked by a pack of Compys who don’t have the foresight to know that Camilla Belle will grow up to be a total babe if left unmauled by dinosaurs. This scene is such a miscalculation and here’s why. You need a sense of awe about Site B (the titular “Lost World”). The whole premise is predicated on the idea that John Hammond wanted to document the majesty of the dinosaurs in their natural habitat and is trying to protect the island, so why not give the audience a sense of awe and wonder from the jump and let Camilla Belle have a good moment with one of the nice dinosaurs? You might say “But Compys are carnivores, they can’t be nice,” to which I reply “Than use a different species or have the Compys be nice. You didn’t know they were mean until you looked it up or saw them in this movie anyways. We all accepted Gizmo as a house pet even though we all are aware that a Mogwai would rip your face clean off if you met one in real life!” As evidence of this opening scene, yeah blow up Site B for all I care. The dinosaurs have won the game on Isla Sorna, but the humans can win the fifth quarter if you catch my drift. 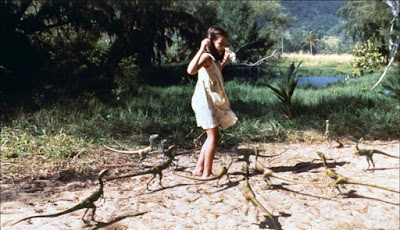 The next 15 to 20 minutes are scenes where I’m convinced no one watched the dailies, because if they did they would know that none of this shit was working and they should start over. Matters aren’t helped by the change of cinematographers from Dean Cundey in the first film to Janusz Kaminski (in his first collaboration with Steven Spielberg), who shoots many scenes with lenses that look like they were extracted from a butt hole, smeared with Vaseline and aimed directly into a window curtain during sunset. I hate the way this movie looks so much. So many Kaminski-Spielberg collaborations are ugly looking. Others are not. They keep you on your toes, these two. It helps that Jeff Goldblum (invaluable and at his peak hotness) is on hand to openly deride the movie’s plot and characters. Once the mission is set into motion, we get the “packing for the trip” sequence where we’re introduced to high-tech gadgetry (yawn), the great lie that is Vince Vaughn and the subplot of Goldblum’s Ian Malcolm and his too-cool-for-school/too-shitty-for-the-gymnastics-team daughter, whose talent is so foreshadowed that she casts multiple shadows in the frame. P.S. Why are kids always smarter than adults in movies? Who in Hollywood originally decided that this is the trope of the child-adult dynamic? I just want to see one scene in a movie where a kid vamps and says the dumbest thing that’s meant to be profound and their parent is like “You don’t know what you’re talking about, buddy. I love you.” Also, Arliss Howard’s bad guy character in this movie...Why? Why? Why have a character only to be on hand to be wrong, smug and actively irritate the audience? You don’t need it to have an antagonist. You have velociraptors to be antagonists.

Once the main players get to Site B, we get the perfunctory awe at the benevolent dinos scene, which is too late in a movie where the dinos have also mauled a child at the onset. We also meet Julianne Moore’s character, Sarah, which is a character so insufferably irresponsible and dumb that it tricks you and leads you to believe it’s a bad performance instead of bad writing. Thankfully, Moore had Boogie Nights right around the corner so The Lost World: Jurassic Park wasn’t a longer-lasting memory for me. What follows is a few scenes of bickering and calling attention to the fact that Malcolm and his daughter don’t have the same skin color (#WhoCares) and then the mercenaries from InGen, the world’s leading company in expenses with no revenue or profit earned, show up to make this movie even worse! G-D bless them. Added to the film is the only other decent character, Pete Postlethwaite’s big-game hunter, who temporarily gives the movie its much-needed smelling salt. We also meet human BBQ grill basting brush, Dr. Burke (Thomas F. Duffy), whose sole purpose is to be wrong and disposable so we can watch him get eaten later without sadness or remorse. The actor would go on a couple years later to play Moxon’s dad in Varsity Blues. In both films, you don’t want his life! After the shitheads from InGen beat up and cage some dinos, they set up camp because they have an after-hours Webex meeting with corporate. Luckily, our heroes decide to sabotage this plan by setting free the dangerous creatures and putting humans in danger because you can’t put a stock price on dinosaur freedom. Believe me, I’ve tried. 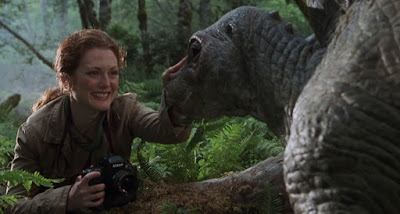 I could continue, but I don’t want to re-watch any more of this movie. I don’t like the centerpiece T. Rex trailer attack (THEY’RE A FAMILY!), I don’t like the drawn-out Stormare death. I’ll never understand why there’s a cut in the middle of Postlehwaite’s line “Let’s get this moveable feast underway” (it’s bothered me for 20 years). I don’t like the raptor action or the way the bulk of the surviving supporting characters are jettisoned so we can get to the dumbest climax in a ‘90s tentpole that somehow blows subbing in the T. Rex as King Kong or Godzilla and having it rampage through San Diego. All of this is wrong. Jurassic Park III is better but still garbage (e.g. Laura Dern marrying a treaty lawyer…give me a fucking break) and my enthusiasm has cooled for Jurassic World since 2015, which was, at the time, the Jurassic Park sequel I think I actually wanted back in 1997. I’m looking forward to Jurassic World 2, but that’s only because I like the director (J.A. Bayona of the great A Monster Calls) and Goldblum is returning to bounce off Chris Pratt.

This is such a goofy series anchored by a remarkable landmark film and one of the least audience satisfying sequels ever made. I saw on Twitter yesterday a criticism of people who didn’t like Alien: Covenant because it wasn’t the film they expected. The argument is that it’s not a filmmaker’s responsibility to live up to your inflated expectations based on previous installments. My rebuttal is shouldn’t the filmmaker and the audience meet each other halfway? Once you put a movie out into the world and it becomes beloved, it seems nonsensical to me to strip the property of its spirit or original allure. The Lost World: Jurassic Park is the prime example of that.

Something has survived. It’s my contempt.