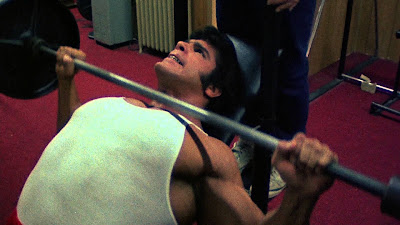 I found Male Tenderness in a Super Buff Place.

The year is 1975. We’re at the Mr. Universe of Mr. Universe's: Mr. Olympia. The competitors are not yet the green superheroes, defenders of the human race, or California governors they’ll become. They're men. Men working tirelessly among other hopefuls to sculpt their bodies, polish their charm, and win the most prestigious bodybuilding title on earth...

Two of these men are, of course, Arnold Schwarzenegger and Lou Ferrigno. 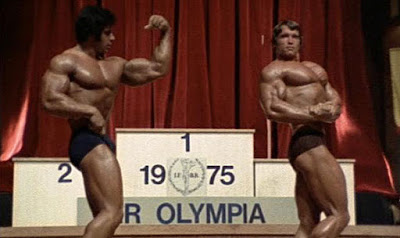 When we think of masculine vulnerability, the last place we expect to find it is in the world of competitive bodybuilding. We imagine large men, drugged out on their own egos and steroidal cocktails. We imagine yelling, open objectification of women, and homoerotic undertones. That’s what we expect...and not to say that those things aren’t present, but the surprising thing about Pumping Iron is that they’re much less prevalent than I anticipated. I saw comradery, men supporting men and giving each other tips and compliments, and I loved it.

The docudrama is storytelling in the buff. ...Ha. Arnold, peppered throughout, adds charm, panache, and sheds a near-philosophical light on the art of muscle-as-material. In 1975, he’s won the Mr. Olympia competition five times and is gunning for his sixth. He’s cool and level headed and as we get to know other (sometimes struggling) competitors, there he is—ready to shoot us a smile and a narcissistic quip about his undeniably impeccable physique.

Among the snarkier moments, where you can’t tell if you’re supposed to love or hate Arnold, we see him in one of his gentler exchanges: a shorter bodybuilder, nowhere near the superhuman appearance of Arnold or any of the other oiled up bodies, poses in front of a mirror. Behind him, Arnold critiques his form. He does so not to shut him down, but to push him to be proud of his physique and to exude confidence in what he does. He tells him “never hide away” and “always look confident.” Like...rip my heart out, Arnold! 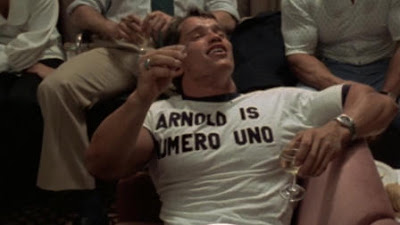 Now I’m the child of two former bodybuilders. My parents, way beyond their competing years, are still hyper into fitness—my mom is a monster of a muay thai boxer and my dad is a crossfit crazy century mile completing machine. They’re maniacs. So I expected to relate to the documentary on that level; one where the competitive spirit is celebrated and functions as the glue between all kinds of people. Pumping Iron, however, does so much more. It doesn’t just investigate the what, but also the why. And in 1975, where going to the gym after work wasn’t a cultural norm and the era of fad fitness was still waiting to flourish in the '80s, this is a pretty cool route to have travelled. People had no idea that these things existed and Arnold was far from the household name he is today.

The film shows off the art of rippling muscles, bolstered by men talking about their relationships to their bodies; hashing out why they decided to pursue such an arduous, self-punishing hobby. Many were bullied, some wanted to be like their dads, and some just found it more physically attractive. Hearing these extremely large men talk about the softer, sadder side of why they make themselves physically bigger is touching, and shows the lengths we all go to feel comfortable in our skins. I’ve recently started actively pursuing a more muscular build (a measure I have prioritized in my transition) and to see cis men open up about the vulnerability in bodybuilding is, for lack of a better word, comforting.

There are two stories that directors George Butler and Robert Fiore focus on and purposefully edit, but for the sake of not indulging you in a complete retelling of the documentary, I just want to focus on Arnold and Lou. From the get-go, it is abundantly clear that Arnold is pure confidence, almost to a sociopathic degree. He is filmed flexing in front of admirers, working out in public, and flirting with women. Lou, however, is shot to show off his more timid side—they shoot him working out in his basement with his father, who voices more about Lou’s training than Lou himself. The shots are close, intimate--you can almost feel the pressure building in his temples. The familial connection is real here. And while we see Arnold being a champion, schmoozing with judges and trainers, and receiving tons of female attention, anything close to what Lou and his dad has is palpably absent. 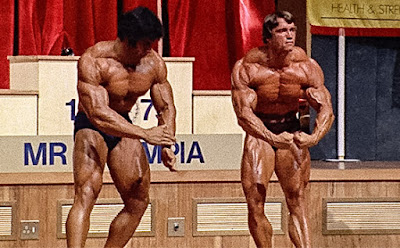 I can't speak for the documentaries created at the time, because truthfully I can't bring a single one to mind, but I love that the way Pumping Iron was edited looks like a prelude to how reality TV shows are shot today. Reality TV, for me, is an indulgent garbage snack of entertainment. I consume things like The Bachelor, Bridalplasty, and Rupaul’s Drag Race like a kid munching on old Halloween candy. And while I recognize these shows are clogging my intelligence arteries, the manipulation that goes into framing the perfect story arc is art in and of itself. Arnold is the cunning villain, the impeccable Goliath. Lou is the hardworking son, training relentlessly to slay the giant, his self-admiration is rare and shy. Shot for shot, they are compared and contrasted down to every detail. We have two heroes...but which one is the real one?

Pumping Iron’s wrap-up is staging perfect at its finest. Arnold talks at length about his own relationship to his family, how he’s sacrificed everything for the titles he’s earned. Leaning back on a couch, muscles relaxed and not on display, he’s not the piece of marble we met at the beginning. He’s complicated, perhaps even a bit wistful. The documentary implies, as Arnold and the Ferrigno family pile into a cab to the airport, that perhaps being a champion isn’t all that awesome.