Need suggestions for stuff to watch each day during #Junesploitation? I've got you covered. 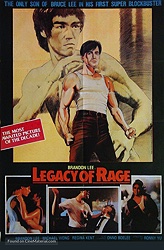 Legacy of Rage (1986, dir. Ronny Yu) I always miss Brandon Lee, but never more than when I'm watching him on film. This, his first starring role and his only Hong Kong production (he made his few other features in the U.S.), casts him as a nice guy with at least five different haircuts who gets sent to prison for murder and looks to settle the score when he gets out. Along the way, there is a lot of melodrama including friends betraying one another, secret pregnancies and characters getting meaningful last words. That sort of thing is commonplace for Hong Kong action cinema of the period and all adds to the charm. When director Ronny Yu cuts loose with the action, Legacy of Rage comes alive in a way that's super fun and violent. There's a scene with some chickens that alone makes the movie worth a watch. Brandon Lee would continue to improve as an actor up through The Crow, but even here demonstrates equal parts charming vulnerability and kickass intensity. It's so sad he left us so soon. (Watch on Amazon Prime Video) 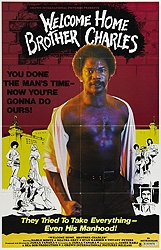 Welcome Home Brother Charles (1975, dir. Jamaa-Fanaka) Should you take my advice and watch this 1975 blaxploitation classic, it will be one of the best movies you watch this month. A racist cop cuts the dick off a black man and sends him to prison; when he gets out, he goes clean but has his mind set on revenge. For the first 75 minutes, this a pretty straightforward blaxploitation drama, anchored by the strong performance of Marlo Monte and some electrifying filmmaking from writer/director Fanaka. Then something else is revealed and Welcome Home Brother Charles (aka Soul Vengeance) becomes a movie you FUCKING HAVE TO SEE. It's some of the best revenge in any movie ever. I'm not being goofy or hyperbolic when I say that I think this is one of the best movies of the 1970s. I'm so glad it's available on Brown Sugar. (Watch on Brown Sugar) 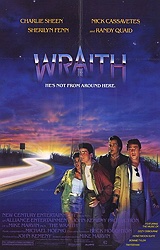 The Wraith (1986, dir. Mike Marvin) Charlie Sheen plays a teenage ghost who rides into town in a mysterious and supernatural car to take down a group of punks led by a wildly overacting Nick Cassavetes. Also, Sherilyn Fenn shows up to be wonderful. Sheen is kind of a blank, but director Mike Marvin stages a lot of crazy practical driving stunts (including one that resulted in a crew member's death) and the movie, an unofficial remake of High Plains Drifter, is a ton of '80s B-movie fun. After you watch it, you can listen to me talk about it with my friend Mike White on the great Projection Booth podcast. (Watch on Netflix) 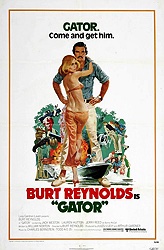 Gator (1976, dir. Burt Reynolds) I have a feeling a lot of people are going to watch this on Burt day because it appears to be the only one of his movies widely available on any streaming platform. That bums me out, a) because I just recently recommended it and now have to recycle a pick and 2) because while it's fun, it's far from my favorite Burt movie. If you're an Amazon subscriber and don't want to spend any extra money, you could do way worse. Otherwise, I'd encourage you to rent something like Sharky's Machine or Navajo Joe or, yes, Stroker Ace. Of course. (Watch on Amazon Prime Video) 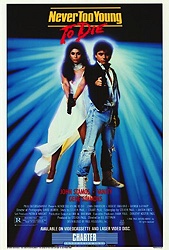 Never Too Young To Die (1986, dir. Gil Bettman) Just hearing the plots of some movies is enough to make a person know they need to see it right away, so here goes: John Stamos plays LANCE STARGROVE, whose spy dad (George Lazenby) is murdered, which requires him to team up with DANJA DEERING (Vanity) to take down cross-dressing supervillain VELVET VON RAGNER (Gene Simmons of KISS, wearing women's clothes). Have you pressed 'play' yet? Scream Factory just put this out on Blu-ray, but you can watch it for free on Shout Factory TV, provided you can put up with the VHS gimmick they've applied. (Watch on Shout Factory TV) 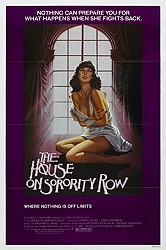 The House on Sorority Row (1983, dir. Mark Rosman) I only saw this for the first time about a year ago and immediately found it to be one of the more underrated of the '80s slashers (though I don't know how "underrated" it can be if it got a slick studio remake in 2009). It's directed well and not completely predictable, but the reason I really like it comes down to the cast of women at the center. They're fun and full of life and I find myself not actually wanting them to die, which is rare for a slasher of the period. Check it out if you've never seen it. (Watch on Shudder) 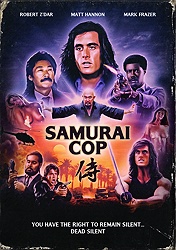 Samurai Cop (1991, dir. Amir Shevan) Listen. Many of you have already mapped out what you'll be watching all month. You've set aside titles and you already know what you're going to put on for Cops! day. I get it. I don't want to tell you what to do. But if you don't watch Samurai Cop for this day, you're kind of being an asshole. This is the kind of movie for which Junesploitation is made. There is no way you will be disappointed. I promise. I PROMISE. (Watch on Amazon Prime Video)
Posted by Patrick Bromley at 12:00 PM