Riske Business: I Hated Working at a Movie Theater

“I have dreamed a dream…but now that dream is gone from me.”
- Morpheus (Laurence Fishburne), The Matrix Reloaded

What are my hours?


I worked at a local mall theater when I was 16 years old for two days. I didn’t know my hours yet so my manager told me to show up at 5pm on Friday, May 29th. The year was 1998. Here’s how the conversation went. 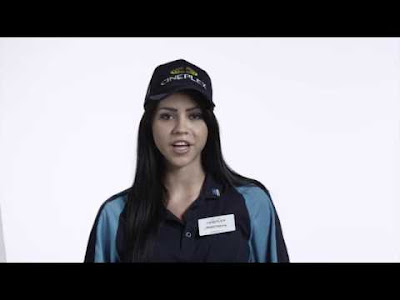 My manager told me I’d be working at the concession stand my first night. There was no training. I was sent straight to the battlefield with only my wits. There were two other teens working at the stand, too. I don’t remember their names, so we’ll call them Jack and Jill. Here’s how that went.

Me: (Extends hand for handshake) Hi, I’m Adam. What’s your name?
Jack: Hey new guy…if life hands you lemons…
Me (confused): Make lemonade?
Jack: Give ‘em butter flavored toppings!
(Jack and Jill laugh like douches and then ignore me for 30 minutes)
Me (in my head): I’m trying to just do an honest job.

Later in the night

Me: Hey Jill, did you see Godzilla? (Note: It was not playing at our theater but was at the nicer, newer theater five minutes away)
Jill: What? You have a customer.
Me (in my head): These people are dispassionate about film. 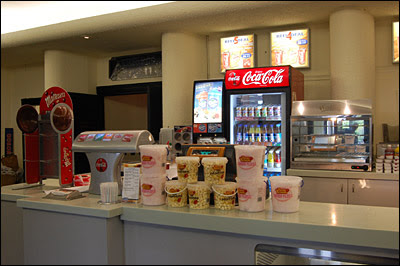 If I might be so bold, working at a concession stand is not where you put a talent like me. I would later get a 26 on my ACT; smart, but not showing off. I’m much more box office or management material. Alas, I was stuck at the stand both that Friday and Saturday. I had some problems.

• The public soured me quickly. I was pouring some old guy his pop and I must have spaced out because he said to me “Earth to kid!” This is demeaning. He broke a social contract and made it personal.

• Then because I was flustered I got pop on my shirt sleeve, so I had to work in this wet long sleeved, vertical striped dress shirt the rest of the day. You can’t work in wet sleeves!

• I also messed up and tore one of the popcorn bags and went to go throw it out. Jack suddenly cares and is all “You can’t throw away bags!” I’m like “Why? It’s a paper bag.” He goes “Inventory!” I said “Whatever,” and threw it out because fuck him and fuck inventory. They can take it out of my minimum wage. It’s a bag, man. It’s just a bag. I was never trained.

• On Saturday, Jack and Jill both took their lunch break at the same time and left me at the concession stand by myself and I was FREAKING OUT because right when they left…guess what…a rush. Of course. A bunch of kids and their parents were going to see Paulie and, let me tell you, there were lines. Every one of these people wanted kid combos. I had to ring and make the kid combos and then check in and see two dozen disappointed parrot heads looking at me with judgmental eyes. “Isn’t there anyone else working here?” one parent called out. “Is there a manager?” another said. “I don’t know where she is. I’m here. We’ll get through this!” was the gist of my reply back. Then, just as I’m almost done with this long line, a woman comes back and says “This Diet Coke tastes funny. Like bad.” I was all “What? Here’s another one.” “Still bad” she said. “How about a bottle of water?” I asked. “Do you need to ring me up for the exchange?” She inquired. “Take it! I’ll figure it out later.” I said, nervously trying to help the next customer.

The line ends and my manager walks over.

TM: “How are things going?”
Me: “Ok. I mean I was left up here in a rush with no training while everyone went on break and the pop tasted funny and I had to give a woman a bottled water instead, but otherwise fine.”
TM: Did you ring up the exchange?
Me: There wasn’t time for that!
TM: Where’s the soda cup?
Me: I threw it away.
TM: But that’s inventory.
Me: I’m sorry.
TM: Did you change the syrup?
Me: What? There’s syrup?
TM: Yeah for the pop.
Me: No one trained me on any of this! 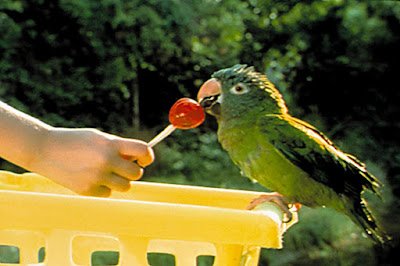 Granted it was just one weekend, but my theater was playing mostly terrible options like Almost Heroes, Bulworth, Deep Impact and Paulie. When I went on break, I didn’t go get dinner. I just went into the theater of the Chris Farley-Matthew Perry vehicle and had an anxiety attack as I dreaded returning to the concession stand more and more with each passing minute. I saw the part where Chris Farley fought off an eagle, in case you were wondering. 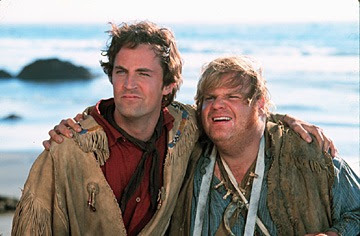 On the first night, I was not a big hit with my coworkers because at 10pm they’re like “Hey, you ready to clean with us?” and I was all “No can do, my good man and good woman. I’m out of here at 10pm. Cleared it with management. I’m 16 and ready to leave. Cheerio!” Maybe that’s why they ditched me during a rush on Saturday???

I was pretty sad and anxious after my second night. I knew I never wanted to go back to work at that theater. It was a crushing realization because this was my favorite theater throughout my boyhood. And now I had a negative association with it. I didn’t want to hate going there.

On Sunday morning, I arrived to work just before 11. I got to the box office and knocked on the window. My manager didn’t come out. I waited a couple of minutes and said fuck it to myself and shoved the uniform and my name badge into the box office. Seeing this, my manager rushed out. I said “I quit.” She looked at me puzzled. “You have to give two weeks notice,” she replied. “I can’t. I just can’t,” I declared and I left.

The theater closed about a year or so later. I went back a handful of times as customer. Each time, I had a queasy feeling in my stomach that almost prevented me from going at all. I got made fun of when I did go there by Jack and Jill. I never got concessions because I was trying to avoid them. It was rough. Try watching Small Soldiers sans snacks. See? You can’t!

In the end, I made the right decision. I took a job at Office Depot three months later. I look back on those two days working at a movie theater every once in a while. I’ll be in a meeting, in the car, or on a date and I’ll look off to the side for a moment, smile and reflect on what could have been. 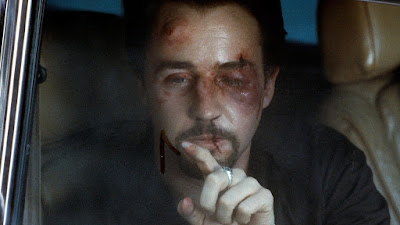 I knock and my manager greets me. She opens the gate to the theater and lets me in. I head behind the concession stand and check inventory. You’ve never changed syrup in the soda fountain, have you? It’s beautiful when it’s done correctly. Better than any can of soda. Popcorn, pop, kid combos, candy, nachos…I sold them all that summer. I earned some cash, just enough for lunch, a magazine, some arcade games but enough to get by. I find peace, I find religion, I find purpose. Maybe one day I come into work and learn from the general manager that an assistant manager spot opened up. I fill out the application, writing slow, letting the moment linger. I make the most of the opportunity as assistant manager. I make a new home at that mall theater; working hard, talking movies. I have movies in my bones, that won’t change. I forget my old life, drop out of high school, never go to college, never looking back. I make a new life for myself and I live it, living it the way it should have been. Maybe in a few months I make a pass at Jill, she smiles and we have intercourse right on that concession stand and have a child out of wedlock. We raise this new family right and give them a good life with kid combos and nachos at an employee discount – sometimes hers, sometimes mine. Jill has a son and I name him Paulie after the parrot movie. Then one day when I’m old and the theater is dead and gone, I gather Paulie and his children and my great-grandchildren and, of course, Jill. I tell them the whole story – the wet sleeves, the lack of training, my temptation to shove my shirt into the box office window and quit. Then I ask them if they know how lucky they are to be here. It almost never happened. Adam Riske could have been working at Office Depot and they would not exist.
Posted by Patrick Bromley at 12:00 PM