Glutton for Punishment: THE BEAST OF HOLLOW MOUNTAIN

We are all interested in feuds between rival cattlemen, beautiful southwestern scenery, and dinosaurs, for that is the stuff we use to fill the days we are not trying new tapas restaurants. You are interested in the unknown, the mysterious, and the bilingual—that is why you are here. And now, for the first time, we are bringing to you the full story of some of the worst movies ever made. We are bringing you all the evidence, based only on the secret testimony of the miserable soul (or “alma miserable”) who survived a screening. I am that miserable soul. The absurd plots, the plodding pace, the gratuitous salsa dancing—my friend, we cannot keep these a secret any longer. Let us punish the guilty. Let us reward the innocent. Remember, my friends: terrible movies such as these will affect you in the future! 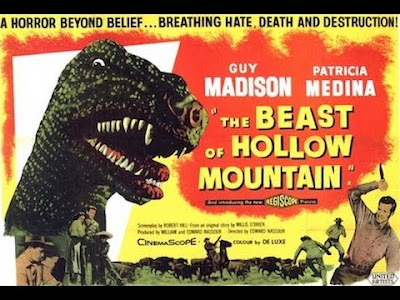 The Beast of Hollow Mountain is tiresome, clichéd, and overlong. It contains unnecessary characters, plot points, and an extended festival scene that seems to present an entire weekend of Mexican dances in real time. Yet, its last act will delight the twelve-year-old in any viewer. Is the dry and irritating first hour worth the sweet, sweet rewards of the last twenty-one minutes? Is the suffering and embarrassment following a night of unprotected debauchery worth the sweet, sweet relief of an eventual shot of penicillin? Yes, I am comparing The Beast of Hollow Mountain to a dose of clap (un caso de sífilis).

The Plot In Brief: Jimmy Ryan (Guy Madison) is a cowboy who keeps losing his cattle. Jimmy blames a rival cattleman, the unscrupulous and quick-tempered Enrique Rios (Eduardo Noriega). Ironically, Enrique blames Jimmy for stealing HIS lost cattle and also trying to steal Enrique’s fiancé, the comely Sarita (Patricia Medina). Could a local superstition—the titular “beast of hollow mountain”—be responsible for the lost cattle? What of little Panchito (Mario Navarro) who Jimmy takes under his wing after the boy’s Papa disappears? What of the annual town festival, which distracts the locals and adds unnecessary authentic dances to the film? What does ANY of this have to do with the “beast” we are promised by the film’s poster?

This film exemplifies a phenomenon decried by Clive Barker in the seminal 1991 documentary Fear in the Dark, in which he explains, “I have no patience with the 1950s style of movie where in the first hour you see a footprint, and the second hour you see a claw, and in the last five minutes you see the creature before it’s destroyed by an atom bomb. I have no interest in that idea of showing monsters—monsters seem to be the thing I go to a movie to see.”

Barker could be describing The Beast of Hollow Mountain. First-hour footprint? Check. Next, we see a glimpse of claw? Check. Only show the monster at the end before it is, I don’t know… drowned in quicksand? You bet.

Still, there are some reasons to recommend this film. It is in color and widescreen and is beautiful to look at, standing in opposition to many ’50s horror films whose producers never saw the need to hire a competent cinematographer. The film was an American/Mexican co-production that filmed English and Spanish versions of each scene back to back. The Spanish version was released as La Bestia de la Montana. Surely, this is the type of cultural cross-fertilization we need to encourage.

But lastly and most importantly, the film has a climax that is a demented revelry of delightfully amateurish stop-motion animation, where former rivals Jimmy and Enrique band together to fight a full-sized, hungry Allosaurus with a bright red tongue. It looks like the beast has been gulping down cherry Slurpees all morning. Yes!

AN ANNOYING AUTOBIOGRAPHICAL PAUSE: Like the Allosaurus, I predate home video; my family’s first VHS machine didn’t arrive until my senior year of high school. Before videotape, I had only a few ways to satisfy my cravings for classic, art, or genre films: the Music Box, Varsity, and Parkway theaters; the handful of broadcast television stations that ran old or obscure movies; and my trusty Super 8mm projector. The projector was a Christmas present when I was in the sixth grade. I used to project my movies in the basement on a hanging bed sheet (I wouldn’t get the screen until the next Christmas—I had the type of parents who LOVED US too much to SPOIL US with things that would MAKE US HAPPY.) I checked movies out of the local public library and purchased them from Blackhawk Films in Davenport, Iowa. Every month Blackhawk put a silent comedy on sale as a loss leader, so that even eleven-year-old JB could afford to buy Charlie Chaplin, Buster Keaton, and Laurel & Hardy movies with his allowance.

BUT WAIT THERE’S MORE: Most of those Blackhawk Films Super 8mm titles were silent and/or in the public domain. But there was ANOTHER company back then that sold “newer” stuff: Castle Films, which produced and sold “digest-length” abridgements available on Super 8mm. These were little 50’ reels (about four minutes) or larger 400’ reels (about twenty minutes) and were sold at camera stores (ha! Remember THOSE?) and Kmart. These bite-sized morsels of Hollywood hits inevitably contained only “the good parts” of the film in question, usually the climax of said film and little else. I’d spend my allowance money on those, too.

MY POINT, AND I DO HAVE ONE: My recent inaugural screening of The Beast of Hollow Mountain prompted this jaunt down memory lane when I realized that I had finally found the ONLY FILM EVER PRODUCED that would be IMPROVED by a Castle Films’ twenty-minute abridgement! Smash opening shot: FOOTPRINT. LOST COW. CLAW. Quick tarantella. EPIC BEAST BATTLE! GLUG GLUG… QUICKSAND. DONE! 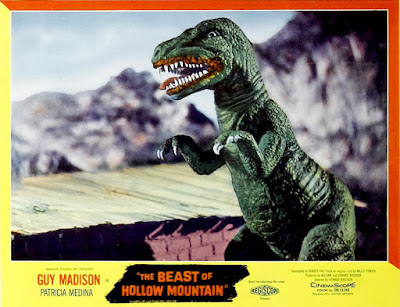 My friend, you have now read this column, based on my own sworn testimony. Can you prove that this film doesn’t exist? Perhaps on your way home, something will brush past your shoulder in the dark, and you will never know it, but that thing may well have been a full-sized Allosaurus. Many scientists believe that dinosaurs actually existed, even if they still don’t believe in magnets, climate change, or gravity. We once laughed at missing cattle and dance fiestas. So much laughter! And now some of us laugh at very bad movies. God help us in the future. (Dios nos ayude en el futuro.)