We are all interested in low-budget movies, second-rate cinema, and wild excuses for art, for that is the stuff we use to pass the time on a rainy Saturday night.

You are interested in tough guys, organized crime, and dry cleaning—that is why you live in the suburbs. And now, for the first time, we are bringing to you the full story of some of the worst movies ever made. We are bringing you all the evidence, based only on the secret testimony of the miserable sap that borrowed one thousand dollars and wound up paying back twenty thousand. I am that miserable sap. The has-been actors, the real tire factories, the listless narratives, the lazy acting—my friend, we cannot keep these a secret any longer. Let us punish the guilty. Let us reward the innocent. Remember: terrible movies such as these will affect you in the future… and never borrow money without first asking your parents to cosign the loan! 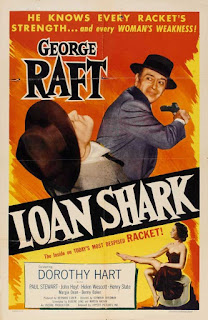 Loan Shark, a tepid 1952 film noir entry from Lippert Pictures, is a case study in failed possibility. In theory, this film should be entertaining. Its cast, crew, narrative, and lead star are all up for the job—yet the finished film remains a puzzling disappointment. The filmmakers set up potentially interesting situation that, unlike the unlucky victims of the loan sharks in the film, never pay off.

The Plot In Brief: Joe Gargen (George Raft) is released from prison and immediately visits his sister Martha (Helen Westcott), who has offered him a roof over his head and three squares a day until he can get back on his feet. Martha’s husband Ed (an un-credited William Phipps) works at the local tire plant, as does comely neighbor Ann Nelson (Dorothy Hart). Ed and Ann think they can get Joe a job at the tire plant if they put in a good word for him. Ann thinks Joe is pretty swell.

Living with your sister and slaving away at a tire plant? Sounds too good to be true… Surely, there must be a catch. 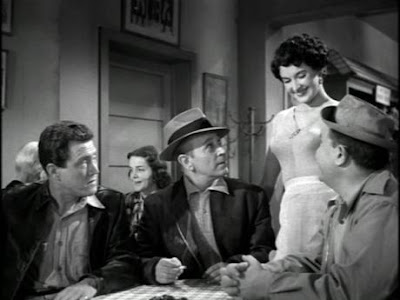 There is. The tire plant, like most commercial enterprises in the 1950s, is being held in the grip of organized crime. The local bar seems to exist solely to entice workers into backroom gambling; they are sent straight to the loan shark to repay their losses and are roped into illegal loans with skyrocketing interest. It’s quite a scam: friendly tire smith Charlie Thompson (Russell Johnson, yes, the Professor from Gilligan’s Island) is actually in cahoots with the criminals; he is paid to lure unsuspecting coworkers to their economic doom.

The president of the tire plant hires Joe to go undercover, infiltrate the loan shark mob, and bring them to justice. Joe gets in so deep, he risks the love of both his sister and the lovely Ann. Can Joe get the goods on the criminal tire factory loan sharking conspiracy before the crooks get the goods on him?

George Raft, here a full 21 years from Scarface, tries his best, but here his best is not enough. I would almost recommend viewing Loan Shark as a perfect example of what it means to “phone it in.” Raft had been acting so long in such similar parts that perhaps he was stuck on autopilot, but I think age plays a part as well: the character of Joe Gargen seems written for an actor in his 30s, and Raft was 51. We question how Joe can beat the snot out of other men half his age and what exactly the character of Ann sees in him. She seems to like him because he is laid back and polite, two adjectives that are death to both drama and film noir. 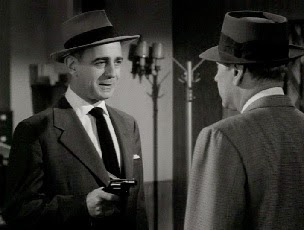 I even question Loan Shark’s designation as film noir. If it is, it is one of the “daylight-iest” noirs ever made. If Loan Shark is a gangster picture, then it is one of the screwiest ever made: part of the narrative involves dry cleaning delivery men extorting money from innocent housewives. I would say that Loan Shark is more of a disguised Western, with outsider Gargen being pulled into a situation that the nice townspeople cannot solve themselves. As an ex-con, Gargen stands outside the law, but his sympathies are still with the law-abiding folk. This is the stuff of classic Westerns, but with Raft starring, I’m guessing most audiences expected fedoras and .38s rather than cowboy hats and Remington rifles. Too bad—I would love to see George Raft in a Western.

I knew I was in trouble with this one when, silently complimenting the film for using real locations (in this case, an actual tire factory) I quickly became much more involved in the process by which automobile tires were manufactured in the early 1950s than in the film’s ostensible narrative. Because Joe rises in the ranks as part of his undercover ruse, we get to see every step of the tire-making process. This process is quite fascinating—from raw rubber to molten rubber to molding and casting and then quality control. When a film’s background becomes the foreground, this is a sign that the filmmakers are in trouble.

Supporting performers John (Attack of the Puppet People) Hoyt and Paul (Citizen Kane) Stewart try their best, but here they are saddled with a slow-moving, turgid melodrama that resists their efforts to shine. As in so many low-budget films, these supporting actors are stuck playing one thing apiece: Hoyt’s character exists to convey orders from a character the film’s narrative is keeping a secret from the audience. Stewart, marvelously oily here as he was in all of his best roles, is “the suspicious guy.” That’s it—just “the suspicious guy.” I am surprised the screenwriters bothered to give these two characters names. They could have just called them “Mouthpiece” and “Wary.” 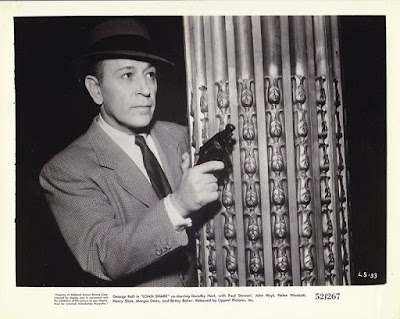 Dorothy Hart plays Raft’s nominal love interest, Ann Nelson. Unfortunately, she’s victim of the oversized, “space-age” aesthetic of 1950s technology (Think huge fins on automobiles, or the “atomic” signage on drive-in restaurants). I’m talking about the astonishing bullet bra she wears in almost every scene. The effect is that we fear our hero Joe is in greater danger from her jutting décolletage than from the local mob. “Take those away, sister; you could put a guy’s eye out!”

REVERSE SPOILER ALERT: In its final twenty minutes, the film suddenly switches gears and we get a neat, expressionistic shoot-out in a big old abandoned theater (Don’t ask.) Gargen has been kept in the dark about Mr. Big’s identity for the whole film, so the audience fears this revelation will be devastating. The final reveal is anti-climactic in a comforting way. Sure, it’s strange and offhand and makes little sense, but astute audience members feared it was ANOTHER character. If Loan Shark had made that decision, it would not only cement its reputation as a full-fledged film noir, but it would have a dandy and devastating climax to boot. I don’t mean to sound so obfuscating, but I shudder at the thought of spoiling even the dubious charms of Loan Shark! 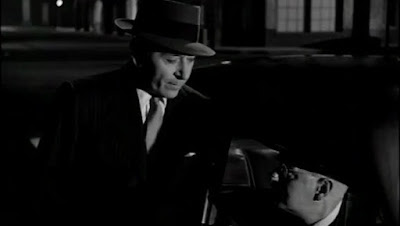 Loan Shark is available on the dandy VCI DVD Forgotten Noir Collector’s Set, Series One, which also includes Portland Expose, They Were So Young, Arson Inc., Shadow Man, and Shoot To Kill. It’s quite a bargain.

My friend, you have now read this column, based on my own sworn testimony. Can you prove that this film doesn’t exist? Perhaps on your way home, someone will pass you in the dark, and you will never know it, but he may be the very loan shark from this film’s title. Or he may be a weary rubber-slinger who owes the mob. Many scientists believe that bad movies are being filmed at this very moment. We once laughed at usurious interest rates, our sister’s donuts, and the aero-plane. So much laughter! And now some of us laugh at very bad movies. God help us in the future.