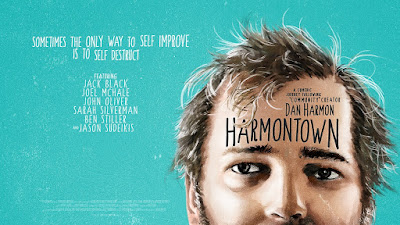 “I want to be the guy who makes people happy.”

I’ve talked a bit in the past about my love for the work of Dan Harmon, the writer/producer behind (among many others) Community and Rick & Morty, two of the most subversive, uncompromising, and imaginative network comedies in recent memory. Both shows thrive on Harmon’s boundless creativity coupled with his crippling manic-depression, an unfortunate tendency toward chaos that has cost him his share of industry recognition. While Harmon boasts a fierce legion of fans and almost universal critical acclaim for his projects, his brutal perfectionism and unconventional work habits have earned him a reputation as a pain in the ass among network executives and creative collaborators alike. He is, by his own admission, a gigantic douche. But those sympathetic to Harmon’s goals might cut him a little slack: he isn’t merely writing comedy — he’s trying to change the way comedy is written. His “story circle” model for breaking episodes merges the conventional three-act TV structure with the themes and cosmology of Joseph Campbell. He believes that a story is a sacred vessel for human compassion and that there is a code for its perfect delivery. It’s the work of a god undertaken by a mortal man desperate to better understand his place in the universe. 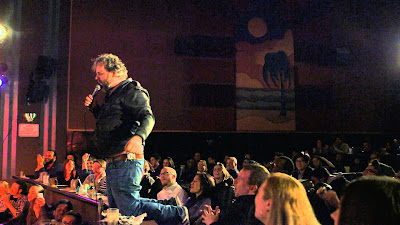 One of Harmon’s most significant brushes with mortality came around 2012, when he was fired from Community after its third season. Knowing that he needed a creative outlet free of the constraints of TV production, he began performing a live comedy show called Harmontown at the tiny Nerd Melt Theater in Los Angeles. Together with comedian Jeff B. Davis and game master Spencer Crittenden, Harmon presents an unstructured space in which fans and friends can gather to learn about each other, go on table-top role-playing adventures, and debate the general futility of existence. The show’s pluralistic ethos is by design; the loose format allows Harmon and others ample opportunity for psychotic rants and emotional breakthroughs. By 2013, the show and its podcast had grown so notorious that Harmon decided to take it on the road. With documentary filmmaker Neil Berkeley in tow, Harmon, Davis, Crittenden, and Harmon’s then-girlfriend Erin McGathy embarked on a nationwide tour aiming not only to provide Harmon himself with a kind of personal catharsis, but also to meet the people to whom his work means so much. The resulting documentary — also called Harmontown — was released in 2014.

Structurally, Harmontown intercuts the tour with talking heads (including Jack Black, John Oliver, Ben Stiller, and others) who recount their working relationships with Harmon, and it’s telling that so many of them are allowed to vent their frustrations with punishing abandon (Sarah Silverman confesses, “I’m his biggest fan, and I fired him!”). It’s a clear sign that Berkeley wasn’t interested in a puff piece glorifying Harmon as a misunderstood visionary, but rather in an honest exploration of the dichotomy between genius and social agency. It’s a wide gap that Harmon showcases during the tour segments: dancing around drunk with a Go Pro strapped to his head, he’s dangerously vulnerable. He’s sloppy, selfish, and frequently cruel. One recurring thread has him procrastinating on two long-overdue scripts for which he’s already been paid to write. Another details the consequences of a blowup between him and McGathy (Harmon, of course, calls a fan up on stage and asks her to decide whether or not they should stay together). But while the film doesn’t shy away from its subject’s flaws, it also carefully tracks the insecurities and self-loathing that shape his bad behavior. He refers to himself as “a little boy who didn’t clean his room” and laments that the hate of those around him is what he deserves. 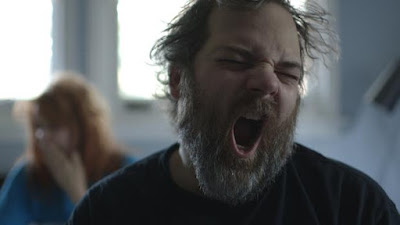 It’s that naked defenselessness on constant display that makes Harmontown so captivating. At the root of Harmon’s misgivings about himself is an intense need to please others with his art, a desperate love for the weird and cock-eyed avenues that connect nerds to each other. The people he meets — whom he refers to as “Harmenians” — are struggling for those connections, and Harmon hopes that by airing out every nook and cranny of his mind – every fear, fetish, ding, and dent – he can be a conduit for inspiration that will help others find enough good in themselves to reach out. This is clearest in his relationship with twenty-something Uber geek Spencer Crittenden, whose journey from random audience member to the group’s moral center makes up the film’s B-story. Harmon himself admits that Crittenden’s sheepish charm and essential incorruptibility make him the hero of Harmontown, and, according to the ancient mythic archetypes on which he bases his own writing, he must either kill the young man or inevitably be killed by him. Crittenden, like every other Harmenian, is “a nerd full of love,” someone for whom Harmon’s self-destructive tendencies can clear a fruitful path. 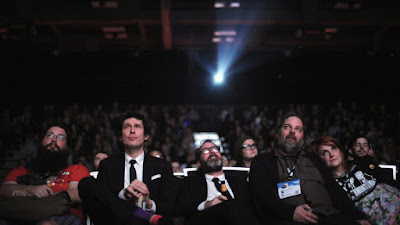 “I tried too hard for an audience that just wanted me to exist,” Harmon says after a particularly bad show. It’s odd to think that something as unstructured as Harmontown could be done wrong, but his point might be that he failed the essential test of vulnerability and honesty required to engage with that space. And the reality is that most people would. Most people wouldn’t want to get up on stage and talk about their fears or share their Google search histories. Most people wouldn’t overdo it on moonshine and admit that they called their girlfriend the c-word. But the great thing about being a part of Harmontown (be it watching the movie or listening to the podcast) is that Dan Harmon takes that leap for us. He makes it safe for us to admit when we’re broken and gives us the space to celebrate when we’re victorious. And maybe the hardest thing to admit is that no matter who we are, personal growth is kind of disgusting. It’s loud and violent. Sometimes we spill it all over the place and embarrass ourselves. Sometimes it takes a twenty-city tour and a month on a bus with our best friends to learn that our flaws aren’t entirely unforgivable, that sometimes being a nerd full of love is enough.
Posted by Patrick Bromley at 5:00 AM