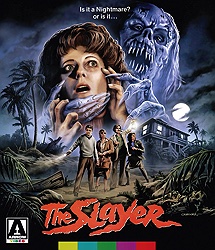 This time, your nightmare is real!

I'm such a mark for '80s slashers and I've seen so goddamn many of them that when I come across one I've not yet watched and it manages to do a few things differently from every other entry in the genre, I'm likely to give it a bit of a pass. Such is the case with 1982's The Slayer, a slasher that wasn't really even on my radar until it was recently restored and released on Blu-ray by Arrow Video.

Make no mistake: The Slayer is not a great movie. At times, it's an actual chore, but then screams to life with a moment of crazy gore or an interesting way of going about telling its story. It saves its best stuff for the last 90s seconds of the movie, apparently wanting to send audiences away wishing that had been the film instead of the dreamy, ponderous thing it ends up being. Because the script is one of those narratives that plays in the sandbox of nightmares vs. waking states, it jumps around between the imaginary and the real with little regard for making sense. Again, that sets it apart from so many of the other early '80s slashers enough that even if it's not great, it's at least different. 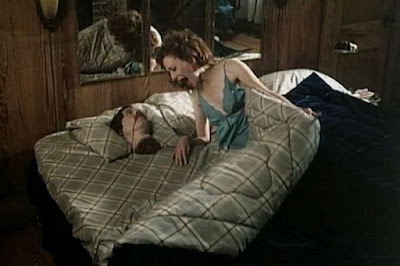 Sarah Kendall plays Kay, an artist who has suffered from terrible nightmares for most of her life. When the nightmares grow in their frequency and intensity, Kay's husband brings her on a vacation alongside her brother and his wife to a small island off the coast of Georgia. Though Kay's dreams have her convinced that danger awaits them at their vacation house, bad weather traps them there while they are systematically killed off. Who's doing the killings? Well, that's complicated.

Long unavailable on DVD, The Slayer's arrival on Arrow's Blu-ray marks the first time I've even become aware of the movie. Having now seen it, I'm caught between appreciating the ways in which it sets itself apart (the dream structure, the fact that it focuses on adults, the protagonist who isn't sure what role she is playing in the narrative) and finding the movie often be a drag but still trying to appreciate the ways in which it sets itself apart. There's something almost academic about the way I experience The Slayer, and that's hardly ever the proper way to enjoy a horror movie. These are films that are meant to feel visceral, to feel scary, to work on our nerves and our senses, not to be observed from some unnamed distance and admired only when contextualized within their specific subgenres. I can't say The Slayer worked for me on most of its intended levels, but even while the pacing was dragging and the performances were feeling wooden and the plot was stumbling around to sort itself out, I was at least thinking "Well, it's not like other slasher movies..." 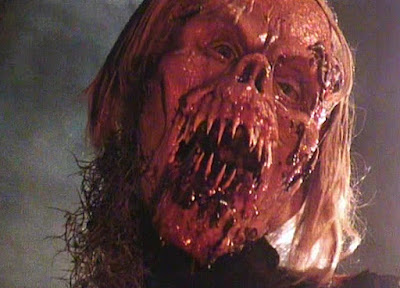 Then, of course, there are those scenes. The ones that landed the movie on the UK's list of video nasties -- a list which all but ensures I'm going to be 50% more excited to see a movie than if that same movie didn't appear on the list. The gory moments in The Slayer are way over the top and actually feel out of place with the rest of the movie's tone; it's neither goofy and fun enough nor dark and mean enough to support the bursts of violence that director J.S. Cardone stages in his feature directing debut (he would go on to the direct the underrated Thunder Alley and script the remakes of both The Stepfather and Prom Night). It's another way that The Slayer distinguishes itself, even if it doesn't exactly work in the film's best interests. Still, it's the rare horror movie that's able to construct a death by attic trap door, so let's give credit where credit is due.

I'm still not sure how much I actually like The Slayer, but I think any fan of '80s horror should see it -- provided they've worked through all of the standards and some of the also-rans. It's a movie better served by what it does differently than what it does well and it makes a number of inscrutable decisions, not the least of which is saving its most striking imagery and effective scare for its closing moments; lest anyone think I'm spoiling it, Arrow has literally chosen to make it their cover art. I can't say as I blame them, either, as it's one of the things that made me want to see the movie in the first place. Had that creepy dude played a larger role in the proceedings -- or if the film as a whole had lived up to the promise of that image -- there's a good chance I could recommend The Slayer as more than just a curiosity.