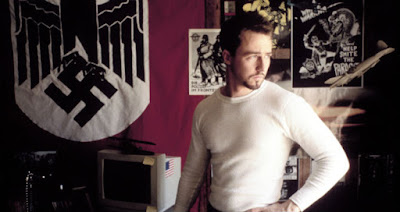 “Has anything you’ve done made your life better?”

Scary Movie Month is our annual celebration of all things horror, thirty-one days of blood-soaked mayhem catalogued for your convenience into handy, seven-word reviews. Ghosts, goblins, cannibalistic, sex-perverted, Italian serial killers — we’ve got it all. This time of year always sparks its share of interesting discussions: We’ve debated whether or not horror movies have to be scary to be effective. We’ve talked about the quirks and fetishes that drive us to horror in the first place. For reasons passing understanding, we’ve also debated whether or not a movie about a child-murdering space clown should be considered horror (there are flaws in our system, but we’re working on it). Though I’m on record as being relatively new to the horror genre, I’m coming to appreciate it more and more the longer I’m a part of this community. However, when really pressed to think of a truly horrifying film, one that I’m actually afraid to watch, my thoughts never go to guts or gore. They go to ideas. Ideas are scary, not only in the sense that the monster in your mind is always more frightening than the one on screen, but also that ideas take us over and drive us to action, often with horrible results. With that in mind, I believe the scariest film I’ve ever seen to be 1998’s American History X. 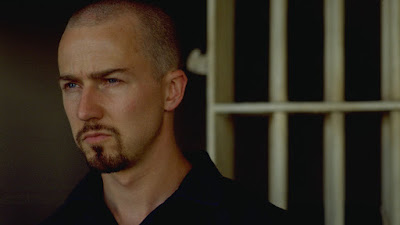 Written by David McKenna (Blow) and directed by noted eccentric Tony Kaye, American History X chronicles Derek Vinyard’s (Edward Norton) seduction by — and eventual liberation from — a hateful life of violent Nazi activism. When his father (Boy Meets World’s William Russ) is murdered by drug dealers while responding to a fire alarm in an African-American neighborhood, Derek commits himself to the xenophobic ideology preached by Cameron Alexander (Stacy Keach). Cameron uses Derek’s dynamic personality and commitment to the cause to organize local skinhead groups into the Disciples of Christ, who carry out a number of hate crimes against the homes and businesses of immigrants and non-whites in the L.A. area. Derek’s girlfriend, Stacey (Fairuza Balk) and best friend, Seth (Ethan Suplee) are along for the ride, as is Derek’s little brother, Danny (Edward Furlong). Derek is eventually sent to prison for the murder of two black men, forcing Danny and his family into poverty and driving his own descent into hate. When Danny turns in a paper celebrating Mein Kampf, his principal (Avery Brooks as Dr. Sweeney) asks him to write a new one about Derek, who is now desperate to break free of the cycle before it destroys his family.

While American History X features a few instances of graphic and horrifying violence, the truly frightening elements lay in the commitment and focus of Derek’s hate. He believes that white America is the only America, that hard-working, law-abiding white communities are being infected by invasive “border-jumpers” who haven’t earned the right to share that space. He believes the infamous Rodney King incident was corrupted by the media, who focused on the police violence rather than King’s own felonious behavior. He believes multiculturalism breeds a disrespect for “conventional morality” and “neighborhood cooperation.” Of course, he’ll hear no arguments about judicial prejudice, economic inequality, or the countless roadblocks preventing immigrants and minorities from achieving true social agency. The slaves were freed over one hundred years ago, he says. When are black people going to get their acts together? He sees no problem with anti-Semitism. He sees no relationship between poverty and crime. He only sees his hate. His hate makes sense to him; his World Order is uncomplicated and pure. These are obvious solutions to serious problems, he says. Why can’t the rest of us see it? 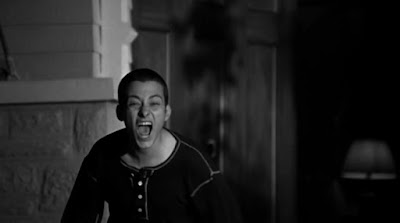 These, of course, are arguments many of us still hear. We hear them at work and at home, at family functions and during presidential debates. People are sure that hate is the answer. Build walls. Deport children. Make everything go away. And like a lot of hateful people, Derek doesn’t see that his hate for others is rooted in his own pain, confusion, and weakness. He doesn’t see that he’s projecting and deflecting the trauma of his father’s death. The true story of American History X is that of a family struggling with loss and anger. They need something to do with that anger, a way to unite themselves in the face of chaos. Their hate creates familial bonds — indeed, Danny’s cynical posturing is primarily a way to connect with (and impress) his older brother, to prove he can be the man of the house. None of this excuses the Vinyard’s behavior, of course, but it would be a mistake to think that their actions are irrational or unfounded. It’s not until Derek goes to prison that he begins to understand the flaws in his system. His friendship with black inmate Lamont (Guy Torry) and his brutal abuse at the hands of fellow white supremacists (along with the intervention of Dr. Sweeney) help him process his anger constructively and find peace within himself. 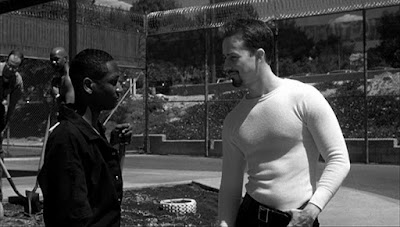 But the darkest terror of American History X comes when Derek realizes it’s too late, that his actions have brought real and irrevocable tragedy to his family. Like the Nazi tattoos scrawled across his chest, this guilt and pain will be etched into his body forever, and no amount of personal atonement will undo the damage he’s done to those around him. “Hate is baggage,” Danny writes in his essay. It’s heavy and burdensome. It chews away at us until we no longer recognize ourselves. Though it gives us focus and drive, it often prevents us from seeing where we’re going until it’s too late to turn back. There are no monsters in American History X, at least not the kind with claws. The monsters are in the single-minded, impotent, ignorant rage that drives people to punish each other for their own hangups and insecurities. For having the things they want or condescending to want them in the first place. Most importantly, American History X is terrifying because it’s about our failure to see the basic humanity of those we don’t understand. That cold, myopic, selfish hate still infects us as a culture, and it scares me more than any slasher ever will.