A Movie I'm Thankful For: MASTER AND COMMANDER: THE FAR SIDE OF THE WORLD 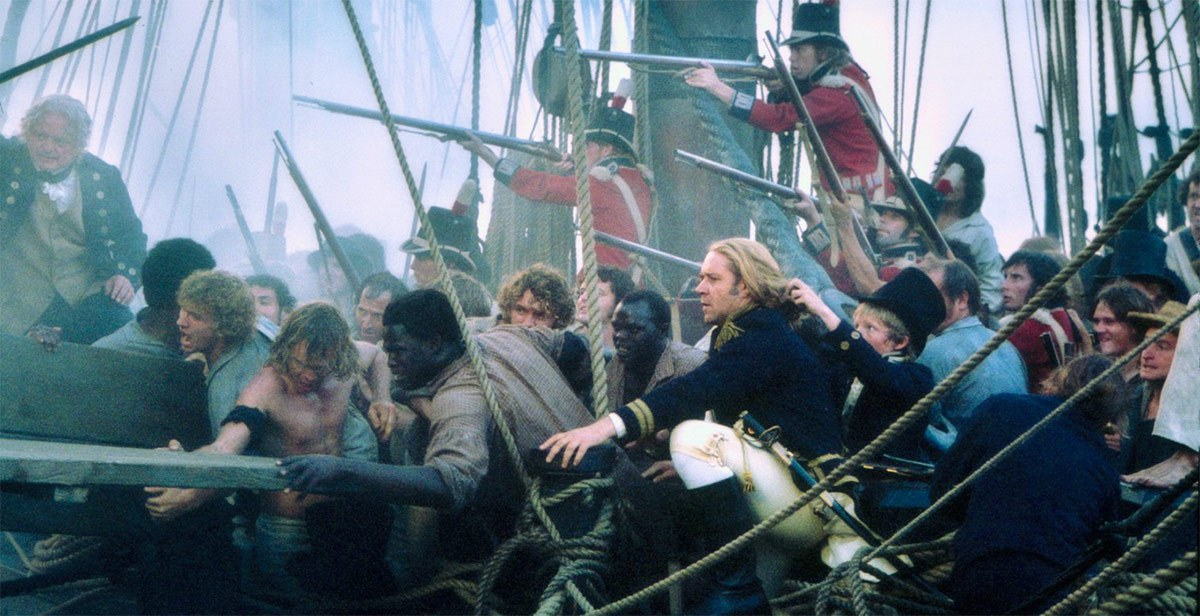 Quick’s the word and sharp’s the action.

One of my favorite types of movies is the sharply detailed history. We expect movies (and TV and books, etc.) to take liberties with real-life details, so I find such pleasure in stories that take the time to be accurate and grounded in depicting a particular era. The most powerful aspect of cinema is bringing to life what we cannot experience ourselves, and I find there are few things more compelling than actual history as source material.

That said, Peter Weir’s Master and Commander:The Far Side of the World (2003) isn’t accurate as a historical record of actual events; the compelling accurate reality here is the detail of life on a frigate in the Royal Navy. The movie, based on a series of novels by English author Patrick O’Brian, painstakingly recreates the 19th century feel of military life at sea, with Russell Crowe as Captain Jack Aubrey, although the argument could be made that the production and sound design of the ship is the real star.

The HMS Surprise creaks, groans, and sways as much as the seas on which it traverses, living and breathing as much as the human characters. Like its crew, the ship takes a lot of damage during its mission; the very structure that crew calls home can instantly turn into the shrapnel that kills them when under cannon fire, as if life wasn’t tenuous enough on the open water. And, just like for any crewmate, the sailors patch up Surprise lovingly and with great care. Without knowing very much about the Napoleonic Wars or sailing ships, I always feel that the story is authentic, because of the amount of narrative time spent on the details like maps, gunnery practice, and naval jargon; I respect the movie for not overexplaining things and counting on the audience to catch up to it on the fly.

Russell Crowe is in his full glory playing the captain, who is not just a military leader, but father, pastor, prophet, coach, and therapist for the crew. Captain Aubrey is mostly a fully formed hero, no doubt benefiting from author O’Brian’s 20 novels' worth of characterization, but Crowe plays him with a confidence bordering brashness, but also with warmth and empathy. I love that the story takes more time in Aubrey’s governing of the ship in its mundane duties, like nurturing the younger midshipmen, rewarding his crew for their efforts, and navigating sea charts, than in the battle sequences because ultimately that is what’s true for Aubrey as well. He loves every aspect of life as a naval officer, not just the fighting. He loves the camaraderie of fellow soldiers and shipmates, the teaching of the craft of seamanship to the young officers, playing music with the ship’s doctor (Paul Bettany), and the burden of authority and leadership. Part of what makes the HMS Surprise come to life is the investment of its captain and the belief of the men in him, and they absolutely do because he reinforces his belief in them regularly. I admit that it’s a little romantic and high-minded, but Crowe plays it with such charisma that I find myself getting immersed in the world and seeing the pleasure in it like Captain Aubrey does.

But that fighting is great. Again, I’m used to lots of ad-libbed ship fighting, where raggedly dressed men charge at each other with flintlock pistols and sabers, like swashbuckling, Pirates of the Caribbean stuff. Master and Commander stops short of swashbuckling because it explains the strategy behind how and why navies fight each other in this way. Despite his brashness, Aubrey is consistently at a disadvantage in the naval engagements for much of the story, showing us that part of this type of warfare is knowing when to retreat and use the vast expanse of dark ocean to escape to fight again. I’m astounded by the type of courage the men and boys who lived this life had, to maintain this type of discipline for months at a time to possibly die far from home.This warfare is also the same type of tension that I love in submarine movies, where one side hides from the other before attacking, where being strategic is more important than how many guns you have, and it’s the most realistic I’ve seen of this kind of battle in a movie. 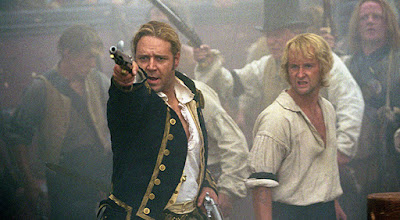 There were some rumors that a sequel would be in the works, with initial support from fans and Crowe, but the momentum has mostly died down due to lukewarm interest from studios and the fact that the movie, though financially successful, was not a box-office smash, so a sequel hardly seems a guaranteed success. Regardless, I never knew that I wanted or needed an adventurous epic set on the ocean, but I’m so thankful that niche source material like Master and Commander, lovingly crafted and made, exists.