Thrills, Chills, and Spills: THE ADVENTURES OF CAPTAIN MARVEL

This movie is fun and crazy fun. 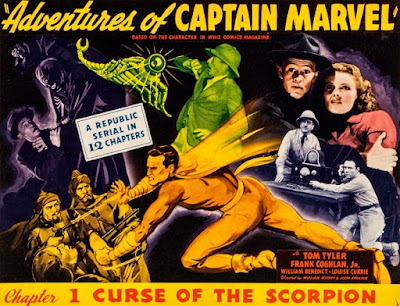 Sister Lee Ann said that she was finished with me not turning in homework and pretty much finished with me. She said it was okay to do my book report on a movie as long as I turned in SOMETHING because if I fail this year like I did last year I will just wind up in Sister Lee Ann’s class again for the very third time. I knew I could wear her down. Sister Lee Ann says that she only hits us when she has to. I guess she has to hit me all the time. I go to the “Our Lady of the Perpetually Leaking Martyrs” School in the city and I am in the fifth grade. Our school is short on resources. And heat. My parents said that if they sent me to public school then I would grow up to be a godless animal. My parents left me home alone this weekend because they are in Belgium.

I picked The Adventures of Captain Marvel because that’s just how I roll. My peers huff paint and play Minecraft. I watch old movie cereals from seventy years ago hence. I thought it would be easier to watch a movie than read a book but I forgot that this was originally shown a chapter at a time in movie theaters and that, total it was almost like four hours long total. Then I discovered the new Blu-ray thing has a commentary track by Tom Weaver and about a dozen invited guests, so I watched it again with the commentary on and drank lots of Red Bull and stayed up late into the night. My parents are in Belgium. If I knew it would take eight hours to watch it, I might have just read a stupid book. 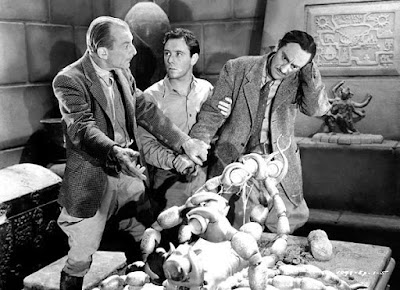 The plot is based off an old comic book and involves a whole bunch of guys who all look the same because a good three quarters of them have those crazy pencil-thin moustaches that I guess were quite a thing in the forties. They are going on an archeology thing and discovering this crazy scorpion thing with lens things in each leg. When the whole crazy thing is put together, it makes a crazy weapon that can also turn rocks into gold.

Billy Batson (Frank Coughlin) is the only character we like because he is the only character who is even close to being normal. Billy starts having second thoughts about desecrating this crazy tomb and runs away, only to run smack dab into this wizard guy who gives him magic powers. When Billy shouts “Shazam!” he turns into Captain Marvel (Tom Tyler). I thought it was a neat idea to have one actor play the normal guy and a different bigger stronger actor to play the super hero. When I saw Batman Hates Superman on the cable last week, I saw Bruce Wayne and Batman and wished Ben Affleck had played neither. 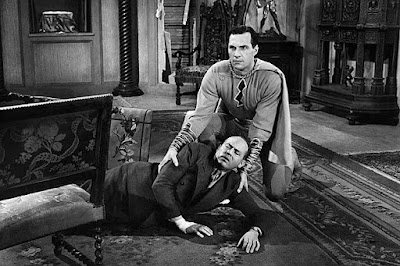 Some crazy guy puts on a black hood and calls himself the Scorpion. He sends out his criminal goons to get all the lenses, so he can put it all together and make like the greatest weapon ever. At every turn, the Scorpion is thwarted by Captain Marvel. It kind of goes like that.

I heard somewhere that Raiders of the Lost Ark was based off of George Lucas and Steven Spielberg’s fond memories of old movie cereals when they were kids. Well, it’s a little more than fond memories because whole chunks of Raiders seem copied off of Captain Marvel, the whole archeology thing, an artifact that is a weapon that emits kind of like a laser beam, and things like that. I think Sister Lee Ann would say that Raiders is plagerized and she would call up Lucas and Spielberg’s moms and tell them they copied and make Lucas and Spielberg write it again!

The way they got Captain Marvel to fly was cool and crazy cool. Obviously, this movie was made before special effects began so the guys who were in charge of the flying had a lot on their plates. When Captain Marvel is in the air, he looks like a big paper machete dummy on a wire with a real cape. Because it’s only filmed from far away, the dummy is moving fast, and the cape is really fluttering in the wind, it looks pretty good. I saw another cereal one time with Superman and whenever Superman flew, he turned into a cartoon. This was better.

The Adventures of Captain Marvel avoided a mistake I saw in other movie cereals. In the other ones, there is a fistfight like every eight minutes, and it gets boring. In Captain Marvel, the troubles and traps and bad things that the characters get into are a whole bunch of different stuff: runaway cars, exploding planes, rivers of lava, and booby-trapped machine guns, it wasn’t just two guys socking each other on the jaw over and over and over again. I thought it was good that the filmmakers tried to go for cool stuff instead of just stupid stuff.

Thrills: 90%
(Some pretty good cliff-hangers, I could see why some people say this is one of the best cereals ever made)

Chills: 50%
(Very few, the Scorpion is supposed to be menacing, but he’s more like one of my Dad’s friends in his pajamas) 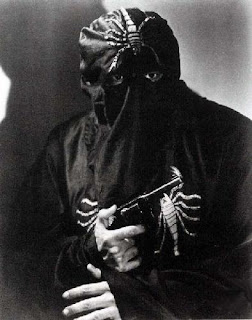 The assignment that Sister Lee Ann assigned was supposed to be 1000 words. I know, right? Come on, I am in the fifth grade. I am a little short, so I am also including pictures of Sister Lee Ann and my school. 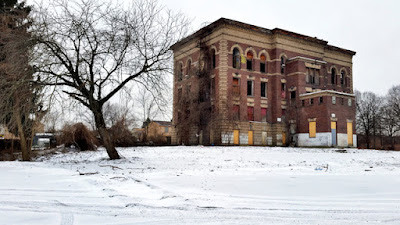 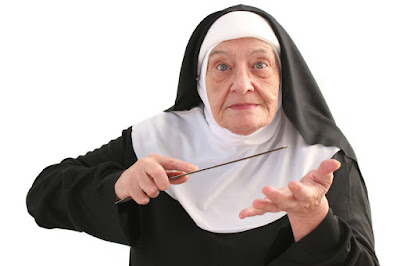