This unique film version of the Robin Hood story could only have been made in 1976.

There are a ton of movie adaptations of the Robin Hood legend, and more than a few of them offer a darker and more realistic take. Robin and Marian represents probably the most nihilistic version ever committed to film, and that includes the Ridley Scott adaptation from 2010. Yet, this movie is important because it tells us “the rest of the story,” as Paul Harvey used to say, and brings the centuries-old-story to a conclusion that has always existed in folklore, but never on movie screens.

There’s no easy way to discuss this film without at least revealing the overall focus of this story and how it’s different from every other version. Simply put, this movie focuses on Robin Hood’s latter days. In fact, the movie’s filming title was “The Death of Robin Hood.” How heroes died in mythology and folklore is just as important as how they lived (see the legend of King Arthur for further proof), and Robin Hood’s last days were almost always a part of the legend; there are versions of the Robin Hood myth that feature his death going back to the 1400s, and yet no movie (or none that I’m aware of) have ever depicted the final days of Robin Hood. Instead, and for very good reason, most other movies focus on the daring, swashbuckling adventures of the hero who robbed from the rich and gave to the poor, opposed a corrupt prince, and defended the honor of the crown while the king was away, allowing him to live happily ever after. 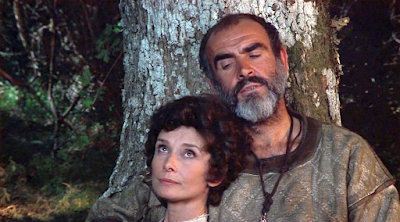 Robin and Marian is unique in presenting us the other half of the legend. Robin has been away from England for twenty years, fighting with King Richard the Lionheart in the Crusades and in French conflicts that have kept him far from home. Now an older man, he’s had his fill of death and battle. When King Richard is mortally wounded, Robin and Little John leave the battlefields and return to merry old England, to the forests of Sherwood. There they are reacquainted with the Merry Men, and Robin discovers that Maid Marian has joined a convent. And yet still, the Sheriff of Nottingham remains an ominous threat to the good people of Sherwood, so a weary Robin finds one last battle that he believes is worth fighting.

The biggest draw of this movie is the cast. The two lead roles in the film are filled by icons: Robin Hood is played by Sir Sean Connery and Marian is played by Audrey Hepburn, making a return to acting after a nine-year-hiatus to raise her family. That’s impressive, but the supporting cast consists of some amazing actors as well. Little John is played by Nicol Williamson (Excalibur), Will Scarlett is played by Denholm Elliott (Raiders of the Lost Ark), Robert Shaw (Jaws) is the Sheriff of Nottingham, Richard Harris (Unforgiven, Harry Potter and the Sorcerer’s Stone) is King Richard, and Ian Holm (Alien and Bilbo Baggins from The Lord of the Rings films) is King John. Also, I don’t think a single major player in this movie is under the age of forty, and these actors brings an impressive sense of weight and drama to the story. 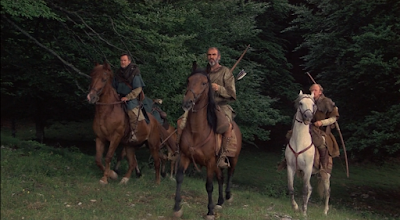 This movie simply would not get made today, not only because it has a gloomy subject matter that deals with aging in a realistic fashion, but also because modern movies that feature older actors are almost always played for comedy, something this movie avoids. I’m thinking of movies like Last Vegas and Just Getting Started. Really, I’m thinking of the kinds of movies that Morgan Freeman makes now. Robin and Marian has no interest in chuckles and seems bound and determined to wring every last bit of melodrama out of the proceedings as possible. Sean Connery plays a very weary Robin Hood, balding and with gray in his beard. It’s an interesting statement in duality, because Connery certainly looks middle-aged (he was 46 at the time of this film), but his last official outing as James Bond in Diamonds Are Forever was only five years in the rearview. The approach to this role must have been a refreshing admission of his own slowing down and transition from action star to elder statesman. Still, it’s weird to think of a guy who’s 46 as being “old.”

This film is often regarded as a romance, and I suppose that’s a fair label, but it’s romantic in the way that Romeo and Juliet is romantic, which is to say it’s mostly a bummer. This story is without a doubt a tragedy; Robin and Marian are clearly two people who have a great love, but that love has been fractured by the hands of time and the circumstances that life has dealt them both. Whereas most other Robin Hood movies are concerned with passion and fairy tale deeds, this movie offers a more injured, grounded view of love. Robin, in particular, is a man filled with regret over the decisions that he’s made. There’s a sad undercurrent that runs beneath this entire story. When I first watched this movie as a young Robin Hood fan, enthusiastic in the years following Robin Hood: Prince of Thieves, I was very put off by the downbeat nature of this story and the melancholy tone. Now, two-and-a-half decades later, I get it. This movie isn’t interested in the daring escapades of Errol Flynn or adventure of later adaptations. Instead, we see what happens when the glory has faded, the kingdom has fallen back into tyranny, and those who once fought are too tired to make a difference. This is a movie about realizing that the end is closer than the beginning, and coming to terms with what you’ve done, both good and bad. It’s ultimately about looking back and realizing that you aren’t the person you once were. 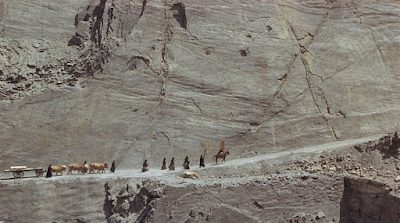 The screenplay was written by James Goldman, the man who won an Oscar for writing 1968’s The Lion in Winter. Goldman also wrote 1971’s Nicholas and Alexandra, a movie about Tsar Nicholas II of Russia during his exile. Both movies look at aging historical leaders and their changing place in the world, so his work on Robin and Marian plays to all his strengths. Richard Lester directed this film, and he makes it something really special. Look, I have to be fully honest that I’m not the biggest fan of Lester. He’s made some great films (A Hard Day’s Night, anyone?), but his connection and collaboration to Alexander and Ilya Salkind, who produced some of his most famous movies throughout the years, is a big sticking point for me. It was Richard Lester who was at the helm when the Salkinds decided to make two movies out of 1973’s The Three Musketeers while only paying the actors for one, leading to “the Salkind Clause” in modern movie contracts. It was Richard Lester who stepped in to finish Superman II after Richard Donner was fired by the Salkinds with the movie 75% completed, changing the tone drastically. It was Richard Lester who then directed Superman III, further departing from Donner’s established tone. Maybe it’s just a matter of Lester being in the wrong place at the wrong time on multiple occasions. My point in bringing all of this up is that I have a hard time with Lester as a director because of all my baggage, but I have to admit that Robin and Marian is a fantastic piece of art that’s worthy of this story’s legacy.

There isn’t a ton of action in this movie, but Lester films what violence there is with a coldness that flies directly in the face of more fantastical, romantic takes on this story. There’s a fight between Sean Connery and Robert Shaw (reminiscent of their tussle in From Russia with Love) that’s absolutely brutal. Furthermore, Lester fills the frames with visuals that convey decline. Rotting fruit, dry, brown grasses, and drab tans make up much of the cinematic palate. This is a movie about autumn and winter, where the best days are in the past. Spain substitutes for both France and England (several of the major players were in tax exile from England and couldn’t set foot there) and this brings the same arid, desolate quality that makes spaghetti westerns so unique. If the late sixties and early seventies were the time of the revisionist western, than this must be a revisionist fantasy. Good guys and bad guys cease to fit into easily-recognizable roles. The same people play out the same tired scenarios, but no one’s heart really seems to be in this anymore. I might as well be talking about the seventies. 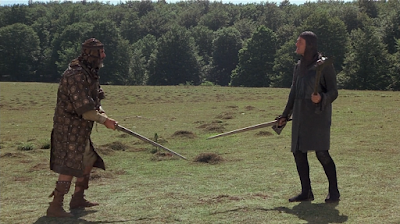 I’m not sure whether I like this movie or not, but I think I do; it’s an important part of an age-old story that rarely gets told anymore. By nature, Robin and Marian is a heavy movie, which is probably why I’m so conflicted. It makes me feel things I’m not eager to explore, and it reminds me of my past (damaged relationships, happier times I can’t seem to get back to) in ways that fill me with regret. After watching this movie again for the purpose of writing about it here, I was down for the rest of the day. I think that’s exactly the reaction that Lester and Goldman were going for. Any director should be proud to make a movie that touches people on a deeper level and brings up such relatable feelings, and the fact that they did it with a story that Hollywood has traditionally treated as high adventure with very few consequences only makes the accomplishment more impressive. While not the fun, goofy experience that Richard Lester movies typically provide, this is a triumph of a different kind. If this movie had been attempted at a different period of movie history, it would have been changed into something more palatable for mass consumption. I’m grateful this was made during the weird, wonderful year of 1976.

Check out more of Heath Holland's writing at his blog Cereal at Midnight!
Posted by Patrick Bromley at 12:00 PM