I give Passage to Marseille so much credit for daring to be its own film. Casablanca was such a critical and commercial success in 1942 (winning the Best Picture Oscar to boot) that it must have been tempting for Warner Bros. to just rush out a quickie cash-in retread. They didn’t. PtM was based on a popular best-selling novel, and I have long held the theory that movies based on novels usually announce themselves quite clearly: more depth of character, more interesting supporting characters, more layered narratives. PtM features all of these qualities, especially the third. 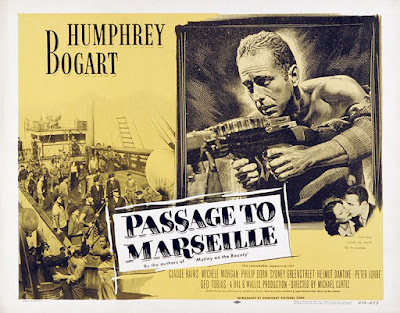 The Plot in Brief: A complicated series of flashbacks reveals the story of five French prisoners sentenced to hard labor in a horrific prison colony in Guyana. With the spiritual and economic help of a much older prisoner (Vladimir Sokolof) they vow to escape, return to France, and fight the Nazis that have just marched into Paris. The motley crew includes Jean Matrac (Humphrey Bogart), a journalist framed for murder; Marius (Peter Lorre), a famous safecracker; Petit (George Tobias), who killed a policeman trying to reposess Petit’s farm; Renault (Philip Dorn), a man exiled for cowardice during WWI; and Garou (Helmut Dantine), a brilliant mechanic with a mysterious past. To achieve their goal, the desperate prisoners will need to outwit both the officious, obnoxious Nazi sympathizer Major Duval (Sydney Greenstreet) and the seemingly sympathetic Captain Freycinet (Claude Rains).

At first viewing, I found it odd that the filmmakers decided to go with the novel’s Byzantine structure of a flashback within a flashback within a flashback within a flashback. It’s complicated storytelling, but Michael Curtiz’s brisk, sharp direction ensures that the audience is never lost. From a hidden airstrip in rural France, we flash back to a canoe of mysterious men rescued from the sea; then backward to the prison camp; then back even further than that. This is an intriguing puzzle box of a film. I think this complicated storytelling works because it properly places the climax of the tale where it belongs: at the end of the film. Had the novelist or screenwriters chosen strict chronology, this compelling, violent resolution would occur about twenty minutes in. Passage to Marseille is a masterpiece of storytelling. 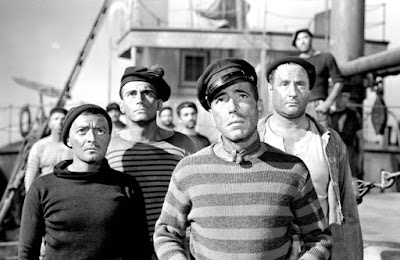 Because Casablanca looms so large in both pop culture and my consciousness, I found myself wishing that these actors were playing their same Casablanca roles, in a sort of ongoing “Rick & Friends” extension of the movie I love so well. They are not—which initially gave me the impression that the performances in Passage to Marseille are not of equal quality. For someone who has seen Casablanca as often as I have, it takes a while to realize that the performances here are just as strong, because the four “Casablanca actors” are still playing variations on the types of roles that won them their contracts at Warner Bros. in the first place. In Passage to Marseille, Bogart is another lone hero with secrets-- a man with more guts than any ten other men. Claude Rains is the charming and ironic realist, the sharpest, wittiest man in the room. Sydney Greenstreet is still the blowhard coward, a man who uses a wall of words to mask his treachery and insecurity. Peter Lorre is again the slimy weasel, possessing talents no other character can offer yet lacking in the people skills to make him an effective member of the team. 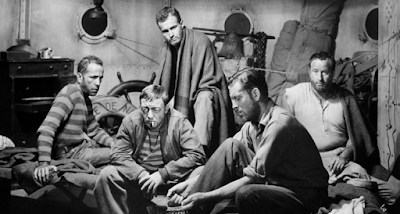 Passage to Marseille also features some of the most impressive miniature work I have seen in a 1940s-era (era) film. Because the narrative involves a secret French airstrip disguised as an innocent cow pasture, elaborate miniatures were used in some scenes to save the expense and logistics of a full-sized set. The film’s opening sequence found me scrambling for my remote to freeze the frame, run it back, and run it back in slow motion to catch the charming subterfuge. The attention to detail is extraordinary; in one shot a tiny mechanical cow turns its head to better convince us of the illusion. The “seams” between full-size and miniature are well hidden, especially in latter sequences involving a mix of full-size and model aircraft. To the dedicated craftsmen who labored on these models, Bravo!

Even though Passage to Marseille is a very different film, in a different genre, it is a worthy follow-up to Casablanca, and well worth your time.

Thrills: 90%
(Exciting WWII action, especially a scene where a French boat is beset by a German bomber plane)

Chills: 75%
(Like most war films worth their salt, the film’s depiction of how cheap and random life can be is properly chilling. Depiction of prison colony is memorably grim.)

Spills: 75%
(Some intriguing stunts during the film’s action sequences, though in one long shot, we can clearly see it is Bogart’s double running the length of a ship and doing impressive leaps and jumps.)