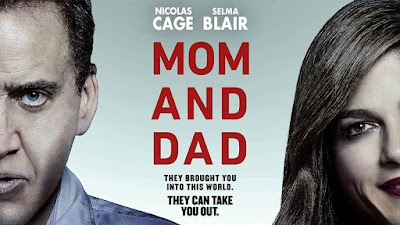 I don't even know anymore.

For some reason, I've had a pretty rough go of it with movies lately. It seems that everything I watch has some sort of horribly disturbing scene or image that puts me off wanting to see any more movies. In the last week alone, I've seen movies in which kids and babies are shot in the opening moments, cats are drowned in real time, pregnant women are repeatedly stabbed and murdered, children drowned in the bathtub, aborted fetuses mutate into monsters...you name it. I'm sure it has something to do with a diet consisting heavily of genre and exploitation movies, but this phenomenon has bled over into regular viewing, too: prestige Oscar bait, festival darlings, all of it. Maybe there's something in the collective consciousness these days that creates this phenomenon. Maybe it's just my bad luck in picking what to watch. Whatever the case, it has really taken a toll on me as of late.

Enter Mom and Dad, the new film written and directed by Brian Taylor (of Neveldine/Taylor, the team responsible for the Crank movies and Gamer, all of which I am a fan), in which a mysterious outbreak causes parents to want to murder their children. Fun, right? Nicolas Cage and Selma Blair play the parents of two kids, one teenage girl (Anne Winters) and one 10-year old boy (Zackary Arthur), who wind up in mom and dad's crosshairs when the outbreak occurs. And that's pretty much the movie. 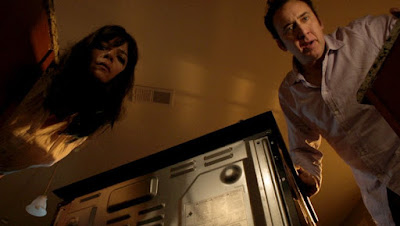 Mom and Dad is a mess that doesn't quite work, but it's the kind of mess that's just good enough that it should be great. There's such an inspired idea for a horror movie at the center; it's like Cooties in reverse, only stronger because it speaks to a more primal, universal fear. Not everyone knows what it's like to be surrounded by kids, as in Cooties, but all of us can relate to what it would feel like if the people we trusted and loved more than anyone suddenly turned on us and tried to take us out. In Mom and Dad's best moments, Taylor understands what is frightening about his own premise. He's capable of conjuring some genuinely disturbing images, like an early scene of a mom abandoning her car on the train tracks, kid still inside (trigger warning), or the movie's scariest shot, in which a bunch of new fathers stand outside the nursery of a maternity ward, angrily eyeing their babies through the glass. There's something nightmarish about that total inversion of natural law.

But this is Brian Taylor we're talking about, so Mom and Dad also has to exhibit some of his trademark brattiness and immaturity, undercutting most of the horror. The most egregious example comes minutes before that maternity ward shot, when a woman tries to murder her newborn baby (like, the umbilical cord is still attached, that's how newborn) and Taylor slathers the soundtrack with Roxette's "It Must've Been Love." Ha ha! Isn't this all so funny? No, ass, it isn't, and you trying to make it funny turns something disturbing into some shitty fratboy joke. Therein lies more of the mess that is Mom and Dad: Taylor pitches so much of the material to be black comedy, but he's only occasionally successful. There are moments that are truly dark and funny, most of which come courtesy of the actors, whether it's Selma Blair casually waving hello to a neighbor on her way to get a garden hose so she can asphyxiate her kids, or Nic Cage giddily talking about them throwing up as the gas gets them. Most of the humor fails to land, though, because Taylor's aesthetic approach is just too over the top for the gallows comedy to be funny. You can't pummel people with a sick joke. You have to let them meet you halfway. 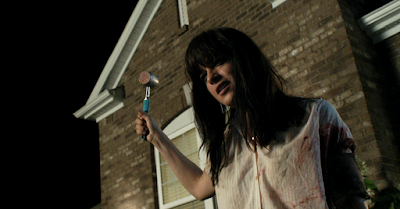 Again, all of this is a bummer because there really is some inspired stuff in Mom and Dad. There are moments early on in which Taylor's screenplay makes casual interactions between kids and parents (like a brief bout of tickling) seem menacing before becoming playful, and there's something compelling about the thin line of power and trust that exists between younger kids and their parents. There's a genuine attempt to show a kind of frustration that parents can feel towards their kids that resonates, so that when that frustration is taken to an illogical degree and explored through violence, it works. Of course, there's a scene halfway through that flashes back three weeks for no good reason other than to give Cage and Blair a chance to spell out all of the disappointment they feel with how their lives have turned out, making any possible subtext into text and reeking of a scene that was added once movie stars were cast. And, sure, some viewers will find it incredibly entertaining to watch Cage demolish a pool table while scream-singing "The Hokey Pokey," but I feel like it's the kind of thing we've come to expect from him at this point -- he's playing right into his image as crazy and over the top. My favorite Cage is the once that can still surprise me. 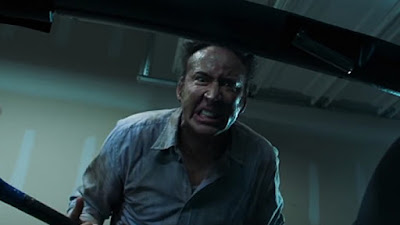 I think what frustrates me most about Mom and Dad is that Taylor can't quite decide what movie he's making. It's a pretty savage horror movie at times, but mostly it's a black comedy with the volume cranked way up. Sometimes it's a movie told from the kids' perspectives, about how terrifying it is when your parents turn on you and want you dead. Sometimes it's a movie told from the parents' perspective, about how your frustration with the people you love and want to protect more than anything in the world can give way to real rage. (Ever hear someone say "I love my kid, but sometimes I could strangle him..."? This movie takes that notion seriously.) Either could be effective as its own film, but dividing the points of view cancels out the ability for each to fully work. We're left with scenes and ideas that should exist in a better movie, instead stuck in this one.

I don't think it's my recent run of upsetting movie selections that got in the way of my liking Mom and Dad. The movie itself took care of that. There's a whole lot of stuff in the movie that's good: Cage certainly has his moments, and Selma Blair is very, very good as the character who's the most sympathetic until she isn't (and even then, she still kind of is). Moments are, at times, truly disturbing, while others are actually funny in the darkly comic way Taylor intends. The finished product is less than its parts, though, making me wish another writer had been given the chance to take a pass at the script and another director had been calling the shots. Taylor deserves credit for what works, but he's also fully to blame for all the stuff that doesn't.
Posted by Patrick Bromley at 12:00 PM