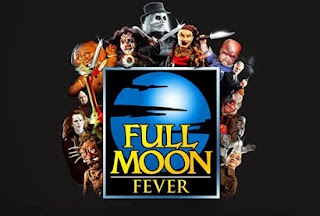 While it's been far too long since I wrote one of these "Full Moon Fever" columns*, the confluence of two events has led me to visit Retro Puppet Master, 1999's prequel to a prequel that visits the early days of titular puppet master Andre Toulon -- you know, the early days that are even earlier than those visited in Puppet Master III. First, I've been reading the recently-released It Came From the Video Aisle, a fairly comprehensive history of Full Moon Features by Dave Jay, William S. Wilson, and Torsten Dewi. As is so often the case when I read any film book, it has immersed me in the world of its subject so fully that it has me jonesing to go back and revisit many of the Full Moon movies I know and love and even many of those on which I still need to catch up. Retro Puppet Master falls into the latter category. The second, of course, is that the film features the first starring role for one Greg Sestero, future best friend of Tommy Wiseau and star of The Room, which has re-entered the pop culture conversation in a big way thanks to The Disaster Artist, adapted from Sestero's book in which the actor is played by Dave Franco. What I'm saying is that Retro Puppet Master is really relevant right now, which is both the first and last time such a claim can be made. It's insights like this that bring so many of you to read Full Moon Fever.** 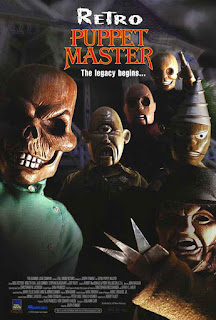 WWII has ended, and Andre Toulon (Guy Rolfe) and his puppets remain in hiding. When Blade discovers another puppet -- a one-eyed creation called Cyclops -- it reminds Toulon of when he first learned to give his pint-sized companions life. He begins to tell the story, flashing back to early 1900s Paris, where a young Toulon (now played by Greg Sestero) is working as a puppeteer and meets both a beautiful woman, Elsa (Brigitta Dau), whom we know to be his future wife, as wells as an Egyptian sorcerer who teaches him how to give life to the lifeless, even transferring the soul of a dead beggar into his Pinhead doll. Unfortunately, the sorcerer is being pursued by three mummies, who arrive in Paris to retrieve the secrets of life and kill anyone who stands in their way.

As the seventh of ten films in Full Moon's flagship Puppet Master franchise, Retro Puppet Master has to find ways to distinguish itself. It does this in a few ways. First, it's the only movie in the franchise to be rated PG-13. There is very little violence, and none of it is especially graphic. That's a far cry from where the series began, which was as a gory and pretty sexual and sleazy little DTV series -- for the first two installments, anyway. It's really hard to pinpoint just what kind of a franchise this, as it continually reinvents and retcons itself. Searching for any sort of consistent through line in the the Puppet Master series is a fool's errand: the first two are straight horror movies, the third is totally its own thing, the fourth and fifth are two parts of a single story that introduces giant demons from a Hell dimension. The sixth movie attempts to relaunch the franchise and get it back to its routes; the eighth is a clip show. The series just keeps changing tones and directions. With that in mind, I might go so far as to describe Retro as the most "family friendly" of the franchise if I didn't think it would bore most families and bring every Thanksgiving dinner to an uncomfortably early end.

But Retro Puppet Master is more family friendly than the other films, because director David DeCouteau (who also made the well-respected Puppet Master III, this movie's immediate precursor Curse of the Puppet Master and would return for Puppet Master: Axis of Evil, the ninth installment, in 2010) leans much more on the fantasy aspects than the horror ones. This is a movie that features sorcerers and magic fights, with composer John Massari (stepping in for Richard Band) contributing a score that feels much more at home in a mid-'80s heroic fantasy than the dark carnival theme that Band wrote for the original. The violence that takes place in the movie -- which, again, is considerably toned down and bloodless -- is more in keeping with a fantasy film than horror. The whole vibe is different.

But what's really different, of course, are the puppets themselves. Because Retro Puppet Master travels so far back into the past, it's able to provide an origin for the would-be killer dolls (who, by this point, are no longer killers but rather the heroes of the series) and even show us the random extras whose souls end up inhabiting their doll bodies. That's some midichlorian shit that I don't need. More relevant to Full Moon's business model, though, is that the use of these "early" puppets means a different design, which means a different toy to be marketed and sold to fans. These old-school puppets are carved out of wood and have designs that remove most of what's interesting about them, save maybe for new puppet Cyclops, who ends up being ok because this is the first and only way we've ever seen him. So now instead of just selling the traditional Puppet Master action figures (none of which I own, to my eternal shame and dismay), Full Moon can sell the variant "retro" models as well. The same goes for their resin statues and bobbleheads and everything else that the company has figured out how to merchandise over and over throughout the years. I suspect it's a big part of why the Puppet Master series has lasted as long as it has. It may very well be the reason Retro Puppet Master exists in the first place.

The cult success of The Room is one of the best things to ever happen to Retro Puppet Master, too, as now Full Moon can exploit the presence of Greg Sestero in the lead. He's blandly handsome with what amounts to an acting class French accent, but I found myself appreciating just how much he commits to the role and how seriously he takes what's happening. Having seen the more recent entries in the series, there's a tendency for the cast to play things really broadly -- to act as though they know they're in a...well, "B" movie doesn't quite describe it...but Sestero and the rest of the case (including Stephen Blackheart, a veteran of Troma) don't do that. While the performances may vary in quality, it's clear that everyone is trying their best and not putting any ironic distance between themselves and the material. When you making movies cheaply and quickly like a lot of Full Moon titles, it helps to have a cast that commits to what they're doing.

In addition to looking fairly good (save those distorted inserts of the puppets made up of standard definition stock shots from the first two movies) and appearing in the proper widescreen aspect ratio for the first time, Full Moon's Blu-ray of Retro Puppet Master is pretty packed with bonus features. There's the usual "Videozone" piece, the movie's original trailer, some bonus Full Moon trailers, and a commentary track with director DeCoteau and star Greg Sestero, who have a relaxed and informative conversation about the production of the film. Also included as more than two hours of behind-the-scenes footage shot during the making of the movie, which also comes with its own separate commentary from DeCoteau. 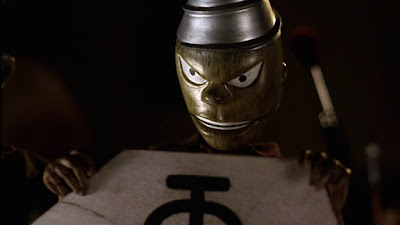 While it may have been borne of some assembly line cynicism -- both for more Puppet Master sequels and toys -- there's still a sense in Retro that everyone is really trying to make a good movie. I'm not crazy about the end results, but it's more or less inoffensive. This isn't where I hoped the series would go back in its infancy, but I also recognize that just releasing 10 loose remakes of the original film is not a way to continue a franchise. If nothing else, I have to admire the weirdness and eccentricity of this sequel. Knowing what I know know now about Greg Sestero's attempts to make it as an actor in Hollywood in the late '90s, as well as what kind of shape Full Moon was in during the same period, gives me a greater appreciation for the work of everyone involved in Retro Puppet Master. For a movie made to sell more toys to a group of fans who probably already owned them, it at least is still trying.

Got a title you'd like to see covered in a future installment of Full Moon Fever? Let us know in the comments below!