SANTA SANGRE and the Arms of Trauma 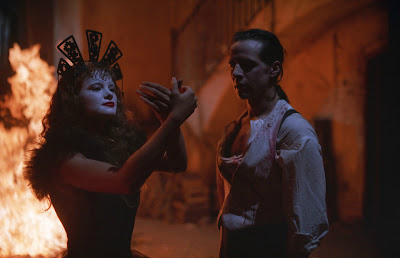 “You will never be free of me. I am inside of you”

1989: the closing year of a decade that perfected the art of The Blockbuster and gifted the world with some of its most beloved franchises. It was the year of Indiana Jones and The Last Crusade, my beloved Say Anything, everyone else’s beloved When Harry Met Sally, and the first of the (undisputable) best Batmans. I knew honoring my choice of just one of 1989’s films would be difficult, but I also knew instantly which of the year’s best captured my heart with the firmest grip. Alejandro Jodorowsky’s Santa Sangre remains an unconventional gem among 1989’s better known mainstream successes. Though it deserves to be championed in the same breath as the successful blockbusters of the year, it sets itself so far apart by telling a beautifully unsettling story that perfectly emulates our darkest dreams.

I’ll admit that I was reluctant to write about Santa Sangre because I felt it presented such a stark tonal contrast to most of the movies that are being celebrated this week, and the last thing anyone wants to be is a downer. The more I thought about it, though, the clearer it became to me that Santa Sangre, while incredibly dark in its means, is rather uplifting and liberating in its end. 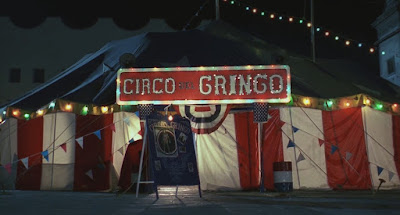 There is nothing I could say about Santa Sangre that would effectively describe the film to someone who is learning about it for the first time. The closest I could ever get is this: it is like nothing you’ve ever seen while being awake. The film opens with our protagonist, Fenix (Axel Jodorowsky), perched on a tree inside of what appears to be an asylum and continues to have an extended flashback to his youth as a child magician in a circus run by his parents. There really is no better setting for Santa Sangre, as the mind tricks and visual illusions that circuses are infamous for are like those that will plague Fenix, and the audience, for the rest of the film. During his time at the circus, Fenix is often lonely and made a victim of mutilation and verbal abuse from his father, Orgo (Guy Stockwell), as well as passive neglect from his deranged mother, Concha (Blanca Guerra). He is exposed to a very public affair between Orgo and the circus’s tattooed woman, which later results in a tragic catastrophe that causes Orgo to lose his genitals, causes Concha to lose her arms, and causes Fenix to lose both his parents. Fenix and the audience are forced to watch every minute of it. The rest of Santa Sangre follows Fenix in his adult life, grappling with the hold that the hand of trauma has on him.

So much for not wanting to be a downer, right? I guess it can’t be helped. Watching Santa Sangre feels so emotionally tedious at points because of how highly it resonates with me in terms of mental illness and trauma. Jodorowsky uses the idea of losing one’s arms, paired with surreal imagery, to manifest on screen how it feels to allow these traumas to define us entirely. You see, while it is Concha who physically loses her arms, Fenix loses his own when she appears to him in delusions and demands that he act as her hands. It is at this point that Fenix loses his identity because he becomes so preoccupied with giving his trauma, represented by this manifestation of his mother, the arms to manipulate him with. Fenix is enslaved by his trauma and his mother’s control for the rest of Santa Sangre, committing unspeakable sins at Concha’s mercy. Despite his attempts to free himself from her physical and emotional constraint, Concha convinces him that it is helpless: “You will never be free of me. I am inside of you.” Time and time again, Fenix feels forced to act on behalf of his mother’s demands, regardless of how monstrous and vile they are in nature. 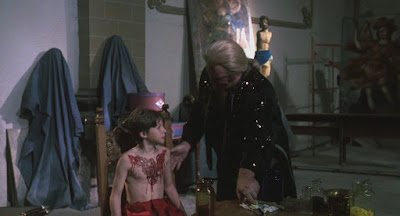 Too many times have I been at the mercy of the arms of my own traumas. Around my first experience with Santa Sangre, establishing an identity independent from my mental illness was becoming harder and harder every day and many times it felt like I was operating in somebody else’s body. Though on a significantly less exaggerated scale, I related to Fenix and his feelings of exasperation when he seemed unable to break away from the arms of trauma. I found his absolute desperation viscerally relatable, and I didn’t think there was a happy ending in sight for Fenix or for myself. Some would argue that there still is no happy ending in Santa Sangre. The movie closes when Fenix realizes, with the help of his old friends from the circus, that his mother can only have a hold on him if he gives her the hands with which to do the holding. Upon having this epiphany, Fenix is asked to put his hands up by officers who are there to arrest him for his and Concha’s heinous crimes. In a moment of pure realization, Fenix utters what I believe to be some of film’s most uplifting lines: “My hands, my hands…MY hands.” His hands are his own again, and this alone obliterates the hold Concha and his trauma had over him. To me, there is no better end. Santa Sangre is a testament that no burden is above being liberated from, and that they are (sometimes) only as powerful as we let them be. 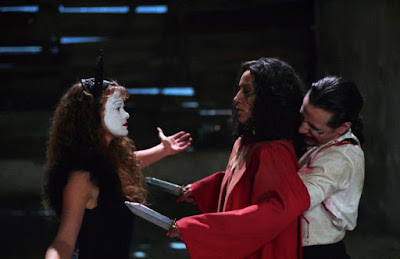 I don’t blame anyone for not always remembering Santa Sangre among the greats of 1989, and while my words hardly do it justice, I hope more people continue to be exposed to my favorite from this year. Concha was wrong when she said Fenix will never be free of her, but her declaration rang true to me in other ways. I will never be free of what Santa Sangre had to teach me, and it will be inside of me forever.