Led Zeppelin’s 1976 mix of concert footage and fantasy vignettes reminds us of two things: the song does indeed remain the same, and Led Zeppelin deserve their reputation as being one of the most excessive bands in rock and roll.

The Song Remains the Same is a mess of a movie, but it’s a likable mess, at least for me. The overly-ambitious concert/documentary/fantasy film attempts to combine the bombastic power of a Led Zeppelin concert with softer footage that includes weird dream-like segments and quiet moments of the band members at home, far from the blazing lights of the stage. In an industry filled with self-important posturing, Led Zeppelin’s only theatrical feature film manages to somehow be even more pretentious than any of their peers, though it does serve to sum up the band nicely. The film itself is occasionally interesting, but the story behind it is fascinating.

The bulk of the picture consists of concert footage that was filmed over three nights at New York’s Madison Square Garden. Here the band played before thousands of eager fans and churned out live performances of their biggest hits and best material during the tail-end of a 1973 tour leg. This footage from Madison Square Garden was captured by director Joe Massot, the filmmaker behind 1968’s Wonderwall, for which Beatle George Harrison provided the music. After Zeppelin’s MSG footage was reviewed, however, it was deemed by the band and their staff to be mostly unusable and impossible to edit, and this is where things get really interesting. The decision was made to sack Massot as the director, give him a severance of a few thousand pounds, and then to bring in an Australian rock documentarian, Peter Clifton. 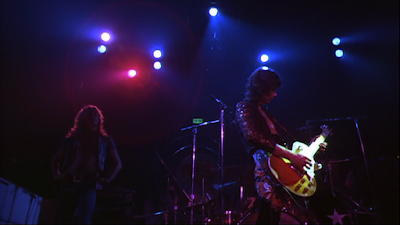 Clifton agreed that the MSG footage wasn’t good enough, and pushed to re-create the concert of a soundstage inside Shepperton Studios, where the band would mime to their actual prior performance. There, under the studio roof in Surrey, Led Zeppelin apparently preened and strutted and sweated for an audience of only a few people, and this footage was intercut with wide shots from Madison Square Garden to make for a seamless viewing experience. There are tells, though: bassist and keyboard player John Paul Jones had cut his hair and had to wear a wig in the reshoots. Similarly, Robert Plant has bad teeth in some of the shots, and pristine teeth in others. For years, though, this was one of rock’s biggest secrets, and only came to light publicly in the last decade or two. For some productions, the story about the concert footage being mixed with soundstage footage would be the most interesting point of discussion. Not so with The Song Remains the Same. There are loads of other weird things in this movie that defy logic and make for endless conversation, such as the “every man” inserts at the beginning of the film. Before the concert footage starts, we have quiet moments with the band members in their private lives. Plant sits by a stream with his wife and watches his small children frolic sans OshKosh in the water. Jones reads Jack and the Beanstalk to his kids. His wife cooks in the kitchen. Jimmy Page plays his guitar on a grassy knoll and then turns to look at us with glowing red eyes. See, they’re just normal guys who live in gigantic houses and can afford to hang out in the country doing nothing! Also, one of them might be supernaturally evil? 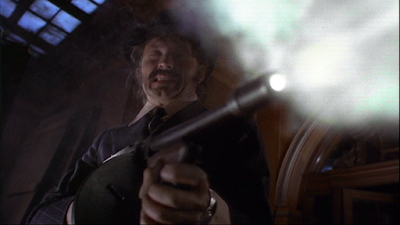 Even more bizarre than the “humble guy” stuff is the decision to insert weird fantasy segments into the film, breaking up the performances with absolutely bizarre vignettes apparently from the subconscious of each member of the band as well as their managers. These segments are both incredibly self-indulgent as well as kind of amusing and charming, in their weird way. The very first one features the band manager Peter Grant and their tour manager, Richard Cole. It’s this weird gangster assault that features the two men opening fire with Tommy guns on a room full of…well, I guess the men in the room are supposed to represent corporate leaders...I think. Everyone is smoking cigars, there are swastikas all over the place, and the men move game pieces around before being blown away. It’s like life is their plaything, man! One of the “victims” has a werewolf mask on. Another is faceless. Mind you, all this takes place during the first few minutes of the movie and plays out with no score or musical accompaniment. One does not simply start a Led Zeppelin concert film with MUSIC. Oh, no.

In other fantasy segments, bassist John Paul Jones rides a horse in a scarecrow mask, a reference to Dr. Syn, the Disney movie. Singer Robert Plant’s fantasy shows him as a medieval knight (or maybe a Tolkien character) rescuing a lady and swashbuckling it up at a Welsh castle, though, he keeps his real sword in his pants. John Bonham’s fantasy segment tellingly has him at home with his family, just being a dad and a husband. 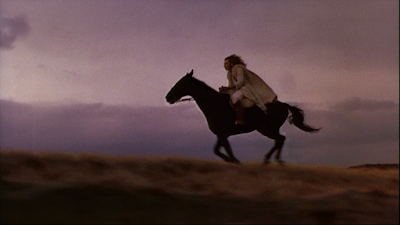 The one that I find most interesting is guitarist Jimmy Page’s fantasy, which relies heavily on occult themes and mysticism. Page climbs a mountain behind his own property, Boleskine House, the estate that was once owned by Aleister Crowley and sits near the shores of Loch Ness. Page seems to be on a quest for enlightenment and truth, and he meets “the hermit” Tarot character upon his arrival at the summit. Though it comes straight from the album art of Led Zeppelin IV (the one with “Stairway to Heaven” on it), it feels like an amateur production of The Lord of the Rings. On the other hand, it also seems very representative of Page’s dalliances with the supernatural as well as the mystical rock posturing of the era that now feels overly-theatrical and kind of goofy all these years removed. Each of the high-concept sequences, as strange and pretentious as some of them are, seem to accurately reflect the personalities they represent. I also appreciate the youthful enthusiasm and naiveté that the sequences depict, reminding me that these were still young, eager guys who had not yet become jaded, exhausted, and plagued by tragedy. They feel like the dreams of a kid to me.

There had been plans to record more concert footage in 1975, but Robert Plant was in a serious car accident that limited his performance ability for almost two years, scrapping any hopes for additional concert material to be captured. Still, I also get the feeling that this project could have stretched on for years and years, never completed, always under construction. The eventual release feels to me like everyone involved throwing up their hands and giving up. Jimmy Page himself has referred to the end product as showing “warts and all.” The viewer gets the impression that The Song Remains the Same is not quite the end product that was initially conceived. 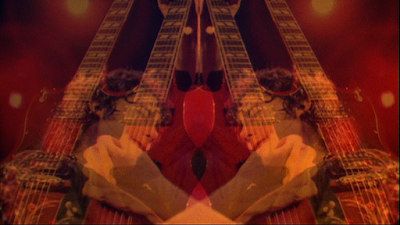 All of this adds up to a very surreal viewing experience. At 2 hours and 17 minutes long, the feature feels overlong, and this isn’t helped by the frequent cutaways. But the music itself remains mostly potent, if occasionally shaggy, and shows a band that, as recorded in 1973 and in 1974, were arguably at the peak of their powers. Both the band and their fans are of mixed opinion on the final product, recognizing that it’s a compromise, but also recognizing that it’s one of just a few visual records of the band.

Maybe because it’s such a bizarre mix of what feels like amateur filmmaking married to undeniably potent music, The Song Remains the Same ironically offers an accurate look at Led Zeppelin during this time period. The music is there, but so is the mystical, larger-than-life pretense that seemed to be a hallmark of the band. You won’t that find mythological force field surrounding bands like The Rolling Stones or The Who. Though they hid behind makeup, KISS always allowed us to be in on the fun. Even Pink Floyd feels more approachable and human than Led Zeppelin, who always seemed to hold the audience at arm’s length, wielding the hammer of the gods and behaving like rock royalty. Appropriately, you’d be hard pressed to find a more hedonistic and self-serving concert film than The Song Remains the Same. But for a band like Led Zeppelin, that seems just about right.

Email ThisBlogThis!Share to TwitterShare to FacebookShare to Pinterest
Labels: 1976 movies, back to 1976, concert movies, rock and roll movies, the song remains the same