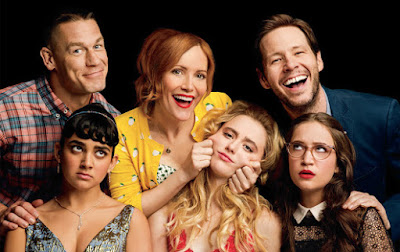 The year's second-worst titled comedy* is not one of the year's worst comedies!

Wait, let me clarify. Yes, Blockers is a stupid name for a comedy. That's because it wasn't supposed to be the name. The movie was originally called Cockblockers, which is a pretty good name for a comedy but obviously too "racy" for a culture in which phrases like "grab her by the pussy" and "describe the President's genitalia" are repeated on the regular during the news cycle. Thank goodness we are being protected from filth like movie titles. Instead, the movie has been renamed Blockers and then marketed with an enormous rooster graphic right near the title on all of the posters and artwork, leaving us puritans to do the heavy lifting of inferring the "cock" for a movie that's just called Blockers. Somehow, this is preferred. Somehow, this is more acceptable.

I bring this up because a) it's hugely hypocritical and bugs the shit out of me (even though it's just marketing nonsense and not the fault of the filmmakers) and b) because it makes it seem like Blockers is a movie that desperately wants to be dirty but is too afraid to go there. And that's not the movie. Blockers uses teen sex the same way that Rob Reiner's The Sure Thing used teen sex more than 30 years ago: as a way of telling a sweet, generally thoughtful story about characters who want to be obsessed with sex because they think they should be, but are too grown up to act like the assholes we see in the majority of the raunchy comedies like the one this one is being positioned as. Blockers isn't too afraid to be dirty. It just doesn't have much interest in it. 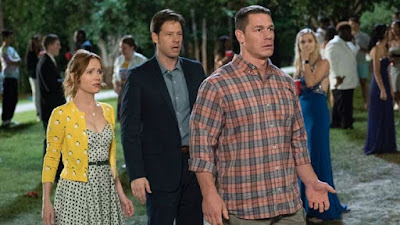 Leslie Mann, John Cena, and Ike Barinholtz play the suburban parents of three teenage girls who are all best friends: Julie (Kathryn Newton), Mann's daughter, who is in six-month relationship with a boy she really likes and with whom she plans to move across the country and attend UCLA; Kayla (Geraldine Viswanathan), Cena's daughter, raised competitively to succeed in every area of life; and Sam (Gideon Adlon), Barinholtz's daughter, afraid of losing her friends if they move away and coming to terms with her sexuality in secret. The girls all agree to lose their virginity on prom night, and when their parents catch wind of the plan, they step in to make sure no one makes a mistake and gives away her special flower before she's ready.

The premise of Blockers feels shockingly out of date, harkening back to a time when movies about parents who are unhealthily obsessed with their kids' sexuality were more the norm (classics like My Father the Hero and She's Out of Control come to mind). But to dismiss Blockers as something so stupidly simplistic is to do a disservice to a comedy that wants to be about some real things, and more often than not succeeds. This tension between what Blockers is meant to be in theory and what it actually is in execution is at the heart of what it gets both right and wrong. This is a fairly smart, often sweet, occasionally progressive comedy at war with having to also be a giant fucking mess like most studio comedies these days. The editing is incredibly sloppy, cutting around the various ad-libs and multiple takes. The ADR is obvious. The big trailer moments that are supposed to be hilarious, whether it's a bunch of characters projectile vomiting or John Cena butt-chugging a 40 oz., feel like relics from the Farrelly fallout of the early 2000s. Blockers ought to be better than that. 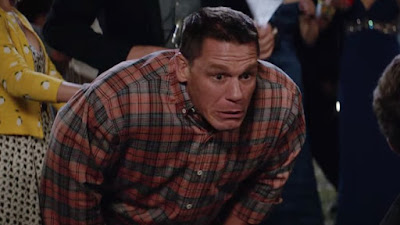 More often than not, it is. There are a lot of laughs in the movie, even if they're of the quieter, more observant variety, like Leslie Mann trying to catch tears with her tongue or the number of times Ike Barinholtz repeats "Have you guys seen Inferno?" John Cena being mistaken for a cop isn't inherently funny, but his insistence that he can't be a cop because his shirt is untucked is. The best jokes in Blockers rarely announce themselves as being big jokes, and it's these smaller moments and specific observations that most seem to interest director Kay Cannon (the writer of all three Pitch Perfect films here making her directing debut). That's because all the good jokes are rooted in the very well-defined characters that Mann, Cena, and Barinholtz create. Watching Cena, once little more than a wrestler-turned-lunkheaded action star in DTV-quality junk like The Marine (a movie I quite enjoy, FWIW), become better known as a comic actor has been tremendously surprising and entertaining. His character is probably the broadest of the three leads, and Cena's performance the muggiest, but he commits to every moment. Leslie Mann is always good at finding the pathos in characters who are trying to hold it together while falling apart, here providing the heart of the movie as a woman for whom teenage sex means everything changing forever. The best surprise of Blockers, though, is Ike Barinholtz, a funny person and a funny actor with a history of playing typical obnoxious characters in film after film. He gets all my favorite laughs by not pushing the humor for a change, and I love the choice to have the fuckup character actually be the most well-adjusted and reasonable in this situation.

Then there's the parallel storyline with the teenage girls, which is also a lot smarter and more observant than most teen comedies. I like the fact that the young cast doesn't look like the usual crop of Disney Channel teens (except maybe Kathryn Newton, who kind of does), and Viswanathan, in particular, demonstrates natural comic chops that feel unaffected and surprising. Gideon Adlon (daughter of the great Pamela Adlon) gets the sweetest subplot, and I appreciate the inclusion of a queer storyline that's handled with frankness and sensitivity in a movie that's supposed to be a big, dumb sex comedy (and credit to the set dresser who put a poster for The Huntsman: Winter War on her bedroom wall). Even Jimmy Bellinger, playing Adlon's prom date, doesn't look like the kid who's usually cast in this role, and the many jokes about his fedora are both funny and totally on point. As is the case with most contemporary comedies, the supporting players are a who's who of welcome faces: Gary Cole, June Diane Raphael, Gina Gershon, Hannibal Buress, Colton Dunn. It's fun to hang out with this movie's cast. 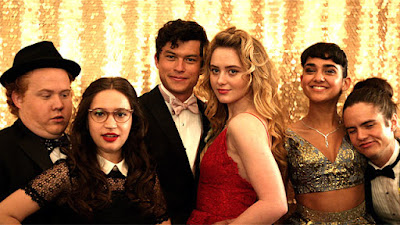 Given all the things that Blockers does right, it's unfortunate that it's so shoddy most of the time and feels the need to wrap up every single dramatic thread in the most conventional way possible (well, almost; credit where credit is due on the Mann/Newton stuff). There will be great scenes of honesty and then characters will be put in some stupid sexual situation that's supposed to be shocking and hilarious but is neither, or talk and act in way that they only do in bad movies. It's a disheartening reminder that for all the ways Blockers transcends being a traditional studio comedy, it's still beholden to being a traditional studio comedy. Good on Kay Cannon and her cast for sneaking as much truth and nuance and representation as they could, even if, at the end of the day, they wind up getting a bit cockblocked.

*The worst titled comedy is Sherlock Gnomes.
Posted by Patrick Bromley at 5:00 AM