Wanna see a movie that’s out of sight? Then check out the sequel to Dolemite!

Rudy Ray Moore is not your typical Blaxploitation movie star. When his first feature film, Dolemite, debuted in 1975, the pudgy stand-up comedian was in his late forties and had made a name doing a club routine as the titular character, but it was in that first movie where Dolemite really came to life. Unfortunately, that movie also mostly forgets the comedy roots and has Moore behaving like a much-diminished version of Shaft minus Richard Roundtree’s good looks, athletic ability, and inherent star quality. In Dolemite, Rudy Ray Moore is a kung fu pimp and hustler trying to make his way in a world where betrayal waits around every turn and you can’t even trust your friends. Though the film occasionally seems to be winking at us, it mostly plays things straight, which doesn’t work when your lead actor is an overweight, middle-aged comedian with absolutely no martial arts ability at all. The world of the first Dolemite outing is a grim place of drug addicts, traitors, and explosive violence with very little levity. 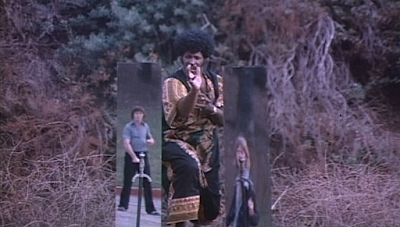 Fortunately for us, the 1976 sequel, The Human Tornado, is a better movie by all accounts and doesn’t require you to see the first film at all. This movie sets the tone by opening with a crazy montage of Dolemite posing in outrageous costumes and doing silly kung fu moves, and it’s instantly apparent that Rudy Ray Moore realized his last outing was too grim and didn’t translate the appeal of the character. From the opening credits, we go into a full five minutes of Moore’s stand-up act, just to further clarify that Moore is a comedian and this is supposed to be fun.

IMDB gives the following plot synopsis for The Human Tornado: “A flabby black comedian defends his community from attacks by stereotypical whites.” Though this description sounds like they’re probably leaving something out, that really does just about cover it. Basically, Dolemite is a righteous dude standing up for his neighborhood, for his own interests, and defending himself and all the fly honeys of the world from racist white people and corrupt authority figures (the two are usually the same). But somehow, Rudy Ray Moore puts enough of his own sense of humor into things that it rarely gets boring and sometimes even feels genuinely surprising. Consider the scene where Dolemite and a beautiful woman go to the bedroom and disrobe. We’re expecting some hardcore lovin’, but the next scene is them in bed exercising. Of course, the sweet love making follows, but Moore knows what we’re expecting and he throws us a curve ball. 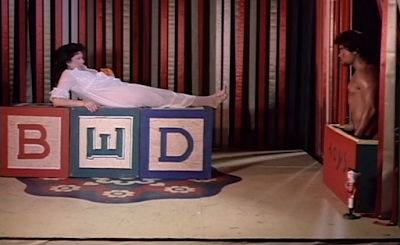 Much of The Human Tornado is a checklist of genre tropes. We’ve got the corrupt white sheriff pursuing Dolemite across state lines with a personal vendetta. We’ve got a gang hit that takes place on the streets of Los Angeles. We’ve got a nightclub that’s being shaken down and must be saved. This movie has everything except a dance competition to save the youth center. It’s a hodgepodge of clichés that somehow works because the film has a swagger and style that feels very authentic and about a million miles removed from Hollywood. Sometimes Moore’s shtick works better than others. The kung fu and the funny faces hold up really well, but other things, like his rhyming comedy, really don’t. They aren’t very clever, and they seem to come straight from the notebook of a fourth grader. Consider this gem: “Boy oh boy, shoes on my feet, now I’m gonna get me somethin’ sweet to eat.” Of course, that one would be way funnier if he had worked the f-word into it, because that’s the formula: find something that rhymes with the f-word, throw in the words “rat soup” and pause for the guffaws. Maybe this was a thousand times more clever and original in 1976, but I doubt it. I realize it was a novelty to see people saying stuff like that on a movie screen, so I’ll cut it some slack.

Still, for a movie that relies so much on parody, it does have some surprising layers. Not ALL the white people in this movie are horrible racists. In fact, there is at least one white guy in the police force who professes equality through his actions. It also shows some black characters betraying their community, and I feel like both of these things are unconventional. This is most likely credited to the script, which was written by Jerry Jones, a writer and sometimes actor who also appears in this film and was in some legitimately great movies like The Long Goodbye with Elliott Gould and Tender Mercies with Robert Duvall. I would have been easier, and probably more appealing, to paint things literally in black and white, but this movie seems to be going for something bigger. 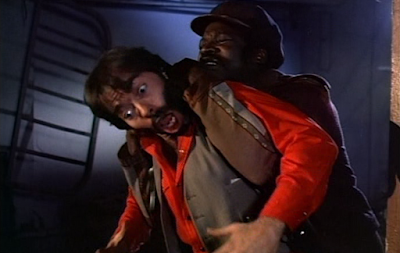 While the “actors” of Dolemite felt purely amateur and therefore authentic (the description “parade of ugly people” immediately springs into my mind, but I feel bad about it because that’s not nice), The Human Tornado seems to actually raise the bar in getting a few actors that seem to be on their way, as well as a few very beautiful people. Watch for a young, pre-Ghostbusters Ernie Hudson giving an amazing performance. Seriously, he’s pretty much in the background for a lot of the movie, then gives a powerhouse performance near the end. If you watch the movie in open matte, you can almost see the words “Oscar Submission” at the bottom of the screen. Outside of that, there are no named actors that I’m familiar with. Even the director, Cliff Roquemore, worked almost exclusively on Rudy Ray Moore films and never stepped into the traditional Hollywood bubble.

The appeal and the power of the Dolemite movies is undeniable. Even though The Human Tornado goes for laughs and is unabashedly sexist, this is still a movie about reversing the power dynamic and giving voice to those who had not been represented in traditional studio movies. It’s always the independent films that first seem to embody the voice of the people, even when they aren’t directly trying to make an overt political statement. Then the studios ultimately follow suit with their own watered-down contributions. Though it’s not necessarily a “good” movie, it accomplishes what it sets out to do, and maybe a few things it didn’t. 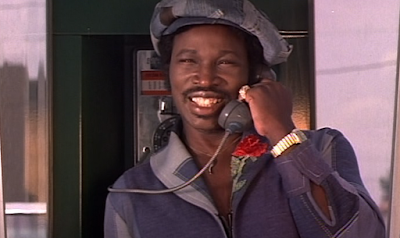 It’s also clear that Rudy Ray Moore is a cult figure, and the Dolemite films have a reputation for being both silly but also VERY popular. The first movie had a budget of 100,000 dollars but made 12 million, and Moore was still revisiting the character as late as 2002 (he died in 2008). Dolemite is a Blaxploitation legend, and I don’t use that word lightly. Moore had a huge influence on the generation after him, and it seems to me that Michael Jai White’s Black Dynamite is about 90 percent a tribute to Dolemite, albeit with a much better cardio. It’s still amazing to watch a movie like The Human Tornado because it feels completely wild, like it was born out of a fever dream of Hennessy, smoke, and motion lotion. So often when I’ve been writing about the movies from this period, I say “this is a movie that could only have been made in 1976.” It’s true, though. We gained so much when blockbusters took over the multiplexes, but it forced a lot of the little movies with smaller budgets and big ideas (or big characters) out of the spotlight, where many of them wouldn’t be rediscovered until the rise of the video store a few years later. The Human Tornado is just one more to add to that list.