Off the Shelf: ALOHA, BOBBY AND ROSE 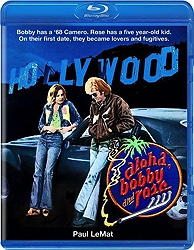 Watching 1975's Aloha, Bobby and Rose on the new Blu-ray from Scorpion and Doppelganger Releasing, I became convinced that Floyd Mutrux could have been a great American director and that we failed him. I mean, that's probably not true because I have seen Hollywood Knights -- I enjoy it for what it is, but it's probably not the work of the next great American filmmaker -- but there is so much vitality and energy and Americana in Aloha that it should be a movie talked about in the same breath as Badlands. This is the movie that Jim McBride's remake of Breathless wanted to be, and I say that as a fan of Jim McBride's remake of Breathless. 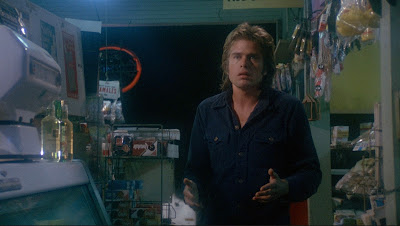 Paul Le Mat is Bobby, a car mechanic in Hollywood whose life is a directionless series of screwups and bailouts. He scores a first date with Rose (Dianne Hull), a single mother of a five-year old living with her mother and working a day job at a car wash. Though they get off to a bumpy start, eventually Rose agrees to go out with Bobby; their date is going well and both are dreaming of getting out of the city and out of their current lives when a tragedy at a convenience store sends them on the run from the police.

It's a familiar story -- outlaw lovers on the run -- but what separates Aloha, Bobby and Rose from the rest of a subgenre that dates all the way back to Gun Crazy (and possibly further) is that the "outlaws" in this case are completely innocent. What started out as a stupid prank erupted into accidental violence with tragic consequences, but it's hard to really blame Bobby or Rose for how the situation escalated. That, coupled with the pair's newfound dreams of a better life, lends the film an even greater sense of tragedy than those that inspired it. What I'm saying is this movie made me incredibly sad. 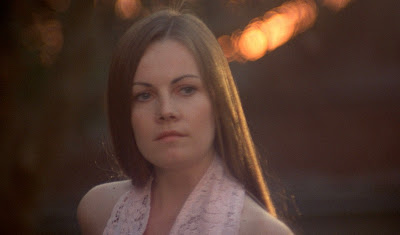 The sadness is what's great about it, though. I don't mean that because it proves our emotional investment in these characters and their plight, even though that's true. What makes the movie special is how it contrasts that looming sense of sadness and tragedy with a youthful, specifically American sense of life, much of which is owed to the incredible soundtrack Mutrux and company have assembled. There are a number of Elton John needle drops, including "Honky Cat," "Your Song," "Bennie and the Jets" and even "Tiny Dancer," which I assumed I would never be able to hear in another movie besides Almost Famous. Bobby and Rose proves me wrong. My favorite music cue is the single best use of Little Eva's "Locomotion" I've ever heard in a movie, heard against the backdrop of a slow motion car accident. It's this movie in a nutshell: the pulse, the energy of, the youth of rock and roll contrasted against the senselessness of life's ticking clock. 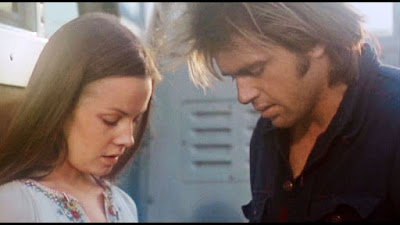 I had never seen Aloha, Bobby and Rose prior to this Blu-ray from Scorpion and Doppelganger Releasing, and the movie knocked me on my ass. It's a secret American classic and makes me think we as movie fans somehow did Floyd Mutrux dirty, because if he had a movie like this in him, we needed to give him more chances to show what else he could do. He openly admits on this Blu-ray's special features that this is his take on Breathless, but it's a good enough interpretation to stand on its own and makes use of its Americana without making it part of the text the way the McBride remake does. If nothing else, the movie -- sure to make my list of favorite new-to-me discoveries of this year -- has made me want to reconsider Mutrux's decidedly brief filmography. Please excuse me while I go order a Blu-ray copy of Hollywood Knights.