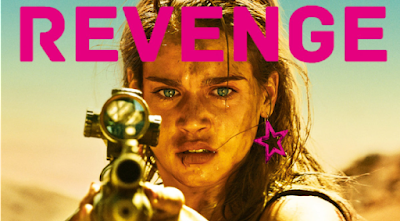 One of this year's best is also its bloodiest.

I'm going to do my best to talk about Revenge as a movie, but I encourage everyone to read up on coverage of the film from female genre writers, as they offer much better perspective on several aspects of the film. There's great stuff out there.

From its opening title card, Revenge announces itself fully and with utter confidence: first-time feature director Coralie Fargeat is not fucking around. This is a movie that knows exactly what story it wants to tell and exactly the way it wants to tell it. The photography is gorgeous, the editing precise, the score hypnotic. It is totally assured. It's also the first movie I thought might make me pass out...maybe ever? 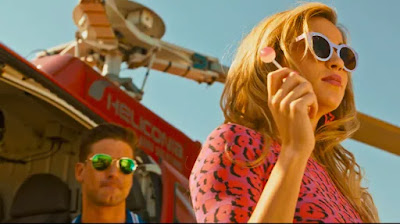 Gorgeous Jen (Matilda Lutz, who sort of resembles Jessica Alba only with life behind her eyes) is brought along by her wealthy, married boyfriend Richard (Kevin Janssens) to spend a few days at his beautiful, remote vacation home before he meets up with two friends for a guys' hunting weekend. Unfortunately, the two men (Vincent Colombe and Guillaume Bouchède) arrive early, and when Richard is gone one day, one of them rapes Jen. Afraid she will go to the cops, Jen is left for dead. Only she doesn't die. The title clues you in to what comes next.

The experience of seeing Revenge -- especially on a big screen (see it this way if you can) -- was thrilling and visceral and downright punishing. Fargeat stages the moments of violence in the film for maximum impact, then basically doubles that by holding on beats and drawing them out twice as long as any other movie might, and in particular through the incredible sound design. This is one of the wettest-sounding movies I can remember seeing, and the way those effects amplify what is being shown on screen cannot be overstated. Revenge isn't interested in making violence easy or fun, even if it does eventually go so over the top that it's hard not to laugh at just how far Fargeat pushes it. She knows exactly what she's doing. 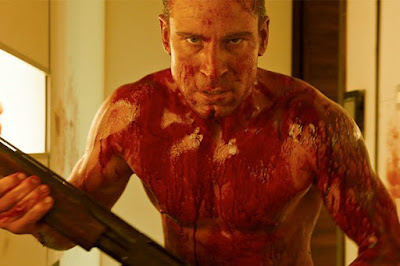 As one of very few rape revenge films written and directed by a woman, it's fascinating to see the ways that Revenge departs from traditional genre entries while still very much following the established formula and speaking the same language. The first third of the film seduces us with its bright, saturated colors, its lavish lifestyle porn, its repeated and lingering shots of Lutz's body. It's every movie directed by Michael Bay, focused entirely on male pleasure. It's not until Jen is "reborn" and removes the thing that is literally penetrating her that the film truly shifts to her perspective (though there are certainly moments earlier than that, particularly in the quiet shifts in behavior and attitude that captures the precise kind of shit women are dealing with every single day). From that point forward, it's not just a story of survival. It's a story of...well, you get it.

The characterization of the three men hunting/being hunted by Jen is especially clever in the way that each of the represents a different form of institutionalized toxicity -- they're all monsters, but they're varying forms of monster. Richard is the alpha, who believes because he is handsome and successful and because he lavishes gifts upon a woman that he is owed something by all women. He's the monster who is calling the shots, the one who poisons everyone and everything with his ugliness. Dimitri is the most passive among them, the one who turns away when he sees an assault taking place and could do something to stop it but would rather not "be involved." What initially seems to be cowardice reveals itself to actually be an active interest in pursuing the status quo. Finally there is Stan, the true coward of the group, the one whose behavior changes as soon as he realizes Jen isn't interested in him and who acts out of anger and entitlement but who still needs other men to tell him what to think and how to act. All of the three, he's the one you're going to find most often on Reddit. 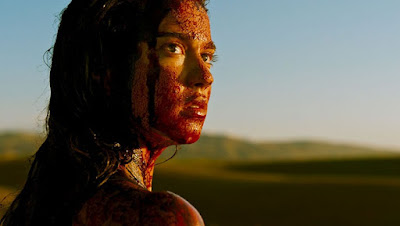 I can't think of a better movie for our current climate than Revenge. It identifies, codifies, and dismantles the type of male attitudes that are finally being called out after far too long and holds them accountable. Very, very accountable. Even without reading gender politics into it -- and it's possible to watch the movie that way, though I think you'd have to make the conscious effort to do so -- this is a great horror film. Inside its gorgeous, candy-colored packaging -- as confident a debut as we've seen in recent years -- Revenge has a warrior of a protagonist who is easy to root for, villains who are easy to hate, and satisfactory justice dispensed. Oh, and blood. So much blood.

Revenge is now playing in limited release and available on VOD and iTunes.
Posted by Patrick Bromley at 5:00 AM