It’s like The Godfather, but with pies instead of horse heads!

I’ve been consistently amazed at the amount of variety that appeared on screens in 1976, but I don’t think any movie better represents the weird, wild, experimental spirit of that year than Bugsy Malone. Here we have a gangster film set in prohibition-era New York City with all the elements you’d expect: extortion, racketeering, illegal speakeasies, rival mob organizations, and gang hits are the order of the day in this tale of the tumultuous twenties, but with a twist! In this crime film, the cast is made up entirely of children. That’s right, everyone in this film is 16 years old or younger. The results are a movie that, as far as I’m aware, stands completely alone in what it does.

Bugsy Malone is ultimately a kid’s movie, but it never feels patronizing or condescending. In fact, one of the joys for me is that it also plays well for adults because, underneath the child actor twist, this is still an engaging gangster movie, albeit one with singing, dancing, and lots of whipped cream. Two rival mob gangs (led by “Fat Sam” and “Dandy Dan”) are fighting for control of organized crime on the tough city streets. In the real Roaring Twenties, underground clubs popped up to illegally serve alcohol to a thirsty public, but in Bugsy Malone, the clubs serve drinks of orange juice and milkshakes. One of the gangs even runs a profitable sarsaparilla racket. Most importantly, when mafia executions are carried out, they are done not with bullets, but with custard cream pies. The movie opens with an unfortunate victim being cornered in a dark alley by a group of thugs who plaster him to the wall with cream from their tommy guns, effectively snuffing him out as an onlooker screams from a second-story window. In Bugsy Malone, getting pied is the equivalent of the Big Sleep. 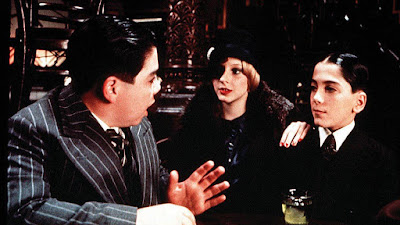 Outside of these occasional substitutions to make it more appealing to kids, the movie has a foot firmly anchored in classic gangster aesthetic. The tough-guy characters run the gamut, but all feel authentic. Scott Baio (Charles in Charge) is Bugsy, and he carries himself with a self-confident swagger that you don’t often find in children. Weirdly, this also seems to indicate a dark side that is present in his performance. The character of Fat Sam is played by a kid (John Cassisi) who was discovered when the filmmakers visited different schools and asked for the worst kid in class. The reason these children work so well in their roles is because there’s a certain amount of reality to their performance. The kids deserve credit for this, but I’d say that the casting department really nailed it when matching real personalities to what was required for certain parts. I admit that not every performance is wonderful, but the vast majority of them are, and that’s really something.

This is also Jodie Foster’s third and final appearance in our look at the movies of 1976, but it’s no surprise that she brings exactly the same thing here that she does to movies like Freaky Friday and Taxi Driver, namely maturity and presence beyond her years. Her character of Tallulah (no doubt inspired by silver screen starlet Tallulah Bankhead) is a torch singer and a denizen of Fat Sam’s club, and she gets to deliver some of the movie’s best lines. When cooly flirting with Bugsy, she asks “Wanna smear my lipstick?” Later, when Bugsy has tripped over something and fallen to the floor, she deadpans “I like my men at my feet.” It’s great, and Foster brings that gravitas that makes her so unique and powerful on screen. Most importantly, she seems to be having FUN. 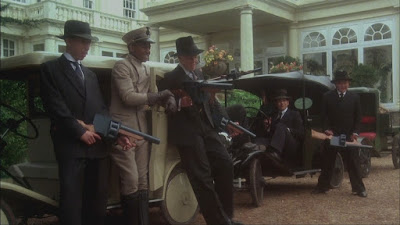 As I seem to say often, I’m amazed that this movie exists. The premise lends itself to a short subject, maybe a one-hour TV special or a sketch on a comedy show, but it doesn’t seem like the kind of thing that would ever get a full-scale film presentation. And yet, here it is. It’s even more amazing to me that this movie was the first full-length movie from writer/director Alan Parker, an English filmmaker that I associate with much heavier subject matter. Bugsy Malone feels like an anomaly in his filmography, as he would go on to direct much more serious and artistic fare such as 1980’s Fame, Pink Floyd’s concept film The Wall, the thriller Angel Heart with Robert De Niro, and critical hits like Evita and Angela’s Ashes. There’s a playfulness and a sense of quirkiness here that isn’t found in the director’s other work.

I should also mention that Bugsy Malone is a full-fledged musical that would make Chicago proud. Most of our characters get a song that defines what they want, and there’s often a lot of dancing to punctuate what they’re singing about. Like the kid mopping up at the bar who could have been a dancer like Fred Astaire, or the thugs who work for Fat Sam and have a whole dance routine to show how tough they are. Interestingly, adult singers provided the real vocals for these songs and all the kids lip-sync, making the musical numbers in this movie the only time that adults are involved in what’s happening on screen. Not a single adult is ever seen on camera. 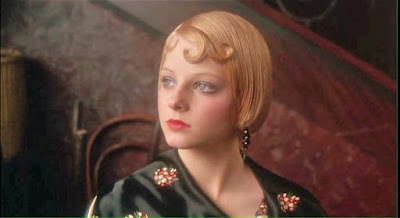 The songs and the score were entirely written (and often performed) by Paul Williams. I just talked about Paul Williams in the last installment of this series when I mentioned that he co-wrote the Oscar-winning song for A Star Is Born with Barbra Streisand. He also popped up in my piece on The Boy in the Plastic Bubble because he had a song in that movie too, as well as contributing a song to the ultra-indie horror Land of the Minotaur, which we also covered here. That’s four appearances during this series on 1976! Is it possible that Paul Williams might be the real star of this series? The answer is “yes.” Is Paul Williams standing behind me making me write this? Also yes. Please send help.

Lastly, I want to take a minute to point out that almost all but a handful of shots for Bugsy Malone were filmed on a set inside Pinewood Studios. This is not a bad thing; the sets themselves are done really well and feel huge and inhabited, but still somehow artificial and otherworldly. The urban streets of New York circa 1927 look amazing as created inside Pinewood by production designer Geoffrey Kirkland. Watching the movie again in preparation to write about it, I kept thinking how much it reminded me of Gotham City in Tim Burton’s 1989 Batman, which also shot almost entirely inside Pinewood Studios. I know it’s probably only a coincidence, but is it possible that some of the sets from Bugsy Malone survived long enough to be repurposed for Tim Burton’s superhero film 13 years later? Probably not…but what if? 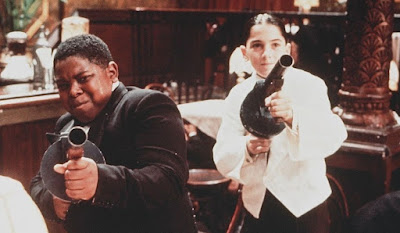 I find the world of Bugsy Malone to be delightful. It takes elements from movies like the 1932 version of Scarface and The Godfather and presents them to a younger audience without talking down to them. By not pandering, it is able to present something akin to a real cautionary tale about the mafia and organized crime during the Prohibition, but with the safety of pies and sodas and cars with bicycle pedals. And, of course, the film ends with a big blowout musical number about acceptance and getting along with one another. This message could feel dated and trite, but all these years later, it still applies. There is no other movie quite like Bugsy Malone, and it’s just another example of why 1976 was such a great year for movies.