Y’all, this movie is crazy.

Death Machines is the kind of lovable cheese that we celebrate during Junesploitation. I watch a lot of exploitation and genre stuff, but I don’t think if I’ve ever seen a movie so stubbornly committed to fit in as many awesome elements from different styles into one single film. Most of the time, we can fit exploitation films neatly into distinct subgenres, but Death Machines is so schizophrenic that labeling it seems practically impossible.

It starts as science fiction during the credits as we see this huge, metallic monolith with faces bulging from its sides. The opening credits feel like they’re out of an unmade Pink Floyd concept film, but have absolutely nothing to do with the rest of the movie. Then it’s like we change the channel and switch to a Kung Fu film as sweaty martial arts guys battle to the death. We’re then introduced to an evil lady crime boss and her shadowy superior, a mastermind who has her inject three of her toughest warriors with a serum that makes them essentially immortal and unbeatable. When these three unstoppable “death machines” start carrying out assassinations and taking down rival mafia-type figures, the movie becomes a seventies crime movie, complete with tired detectives who thought they’d seen it all but have never seen anything quite like this. It goes on and on, switching genres on a dime and becoming a completely different movie every ten minutes or so. 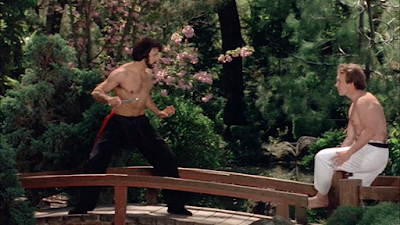 The wildest thing is that this somehow works! If it stayed in any one subgenre, such as a martial arts or gritty crime, or even thriller, Death Machines would run out of steam quickly. There’s precious little substance to this film; I’m not sure it has a story. The premise is clear, but premise and plot aren’t really the same thing. For about 90 minutes, we watch these zombie-like killers with incredible martial arts skills destroy criminal organizations by taking out key players. We watch them attack a karate school, killing what seems like dozens of martial arts students in a single scene. We watch the cops chase the unstoppable killers. We watch their evil boss scheme about destroying all competition and becoming the ruler of all organized crime. But none of these elements feel like they’re on any rails, or are in service of an actual narrative.

In most movies, this would be high criticism. Here it’s almost a compliment. You know how in Pulp Fiction, Tarantino weaves a series of seemingly-unrelated vignettes into a tapestry of storytelling? You have the stuff with Vince and Jules in the car, you have Vince’s “date” with the boss’s wife, you have the boxer storyline, you have the two lovebird robbers, and the stories seem mostly unrelated until the credits roll. When you step back, you realize you’ve spent time with a bunch of interconnected characters and events that were all in the service of a bigger picture. This movie does something similar, but I think it gets there completely by accident. 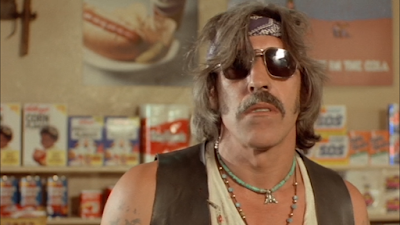 The main cast of Death Machines often butts up against another character who somehow becomes the focus of the scene they’re in. Consider this example: a low-level gangster goes into an Italian restaurant for some spaghetti. The chef/owner brings him the plate of pasta and suddenly THIS GUY is our main character. He’s all like “I make-a the pasta for you, it’s-a from my own special a-recipe! You want-a da best pasta, you come-a to da right place!” If Super Mario was a real guy, this is what he’d be like. I have no idea what the direction was for this scene, but it’s so bizarre. For like five minutes, the owner of this restaurant becomes the complete center of the movie. He serves no purpose to the larger story. He’s not a recognizable actor. He exists to bring this guy spaghetti, but the movie puts a gigantic spotlight on him until there’s an action beat and we move on.

Later, one of the juiced-up death machine assassins is fleeing from the cops in the middle of an urban area and all of the sudden finds himself in a rural gas station with a restaurant attached. The entire vibe of the movie changes yet again, and when a group of grizzled bikers wander into the gas station looking for trouble, we’re no longer in a world of urban crime and martial arts, but a redneck revenge story where Hell’s Angels hooligans terrorize good rural people and won’t leave THAT ONE GUY--the one who is being quiet and just wants to eat in peace-- alone until he’s forced to fight back. Again, our focus has switched from the characters we’re supposed to be watching to these bikers, who seem to have stepped out of their own movie into this one. 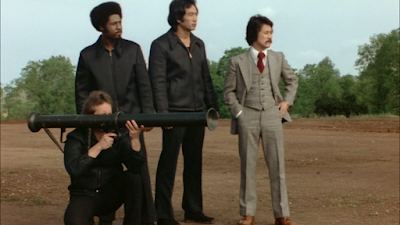 The whole movie is like this. It’s like we’re flipping the channels on TV, only there’s a hazy through-line to everything we end up watching. The craziest thing, though, is that there’s a level of competence (don’t ask me how) at play here that makes it all work. The filmmakers and the cast are so committed to every single trope and cliché they throw at us that we can’t help but be won over. It’s like the director (Paul Kyriazi in his debut) knew he only had one attempt at making a movie, so he put every idea he had into this one. Because of his conviction, as well as the competence of the stunts and the action scenes, this movie works despite its scattered nature. The action scenes are incredible. The fight choreography is on point. Punches and kicks look brutal, and explosions have a devastating feel that is appropriate. According to the internet, the budget for this movie was $70,000, yet it feels much bigger. It’s amazing. 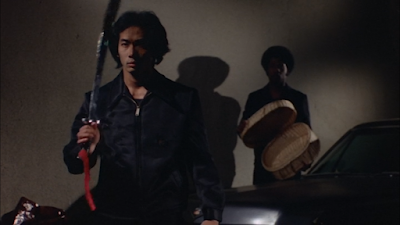 I can’t recall seeing another movie quite like Death Machines. It goes beyond mere genre movie and somehow becomes a movie of many genres. It breaks all the cinematic and narrative rules by repeatedly switching focus, stopping the flow of action for long stretches to focus on something completely out of the blue that usually has no bearing on the movie as a whole. It serves its ancillary characters in extravagant ways, giving them way too much of a spotlight at the expense of characters that are supposed to be our leads. But in doing all these unconventional things, it somehow manages to stand out and have a unique voice. In breaking the rules, it becomes something that’s absolutely bonkers, but also completely fun. Death Machines has to be seen to be believed, and Junesploitation is the perfect time to check it out.