I was first introduced to Joseph Lewis’s 1949 opus Gun Crazy through the documentary Film Noir: Bringing the Darkness to Light, which I used to show my Film Study students to make them love film noir. It wasn’t a hard sell; the stereotypical teenage “everything sucks” philosophy fits hand in glove with film noir’s famous pessimism and fatalism. “At last!” my students would cheer, “We have found an American film genre that perfectly aligns with our angst-ridden suspicion and total nihilism.” Then they would hoist me on a chair above their shoulders and we would march through the hallways spouting film noir phrases like “Dames is poison” and “This city will beat you, Johnny!” 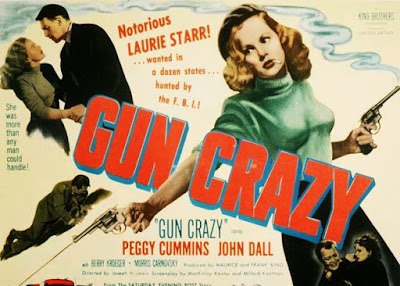 The whole crazy thing has come full circle now that Warner Archive has served up a delicious new transfer of Gun Crazy on Blu-ray disc—and one of the bonus features is that very same film noir documentary. Now interested viewers will no longer need to strain their eyes watching this little gem on YouTube.

The Plot In Brief: Bart Tare (John Dahl) has been obsessed with guns from an early age, an interest that has landed him in a number of juvenile prisons. One day at a carnival he meets the lovely and vivacious sharpshooter Annie Starr (Peggy Cummins) and, after challenging each other to a shooting contest, they both realize theirs is a match made in heaven. 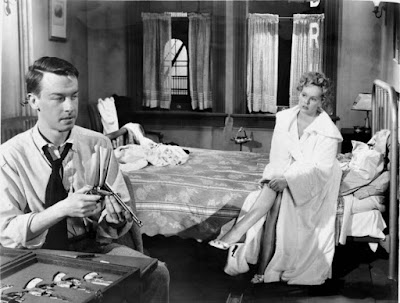 One of the many things that I love about Gun Crazy is that it upends many genre conventions. For instance, Annie is the real nutcase here, not Bart. Gun Crazy turns the tables on the criminal trope of the hotheaded man and his loyal girl representing the voice of reason. She is a true femme fatale; Annie will ensure Bart’s tragic end through her limitless abandon and zeal. She both magnifies and doubles-down on all of Bart’s worst qualities: Bart loves guns, but Annie is a dangerous sociopath.

Can we talk for a moment about what a weird character name “Bart Tare” is? It is aggressively short, and can be typed using only the left hand—I am assuming that this is so secret (blacklisted) screenwriter Dalton Trumbo could sneak a drag on his cigar every time “Bart Tare” had a line. I also wonder if Gun Crazy were one of Trumbo’s bathtub scripts—he liked to write in the tub. Look it up.

Gun Crazy’s most famous sequence, which is just as thrilling today as it was to audiences 68 years ago, involves a bank robbery captured in one continuous shot with no breaks or editing. This amazing shot details our criminal couple driving up to the bank, getting out of the car and entering the bank, general pandemonium with shots fired, and then their return to the car and the getaway. It’s superb, exciting filmmaking. To pull this off, Joseph Lewis and his crew simulated the interior of Bart and Annie’s car; it was actually a larger Cadillac with room to mount both the camera and a chair for the cameraman in the back. The audience is literally placed in the back seat of a getaway vehicle during a real-time robbery. Wow! 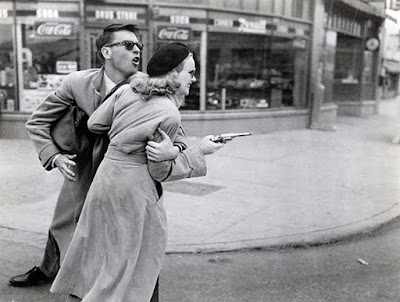 Above all else, Gun Crazy understands that moving pictures… need to move. This has been true since the days of the Lumiere Brothers and Thomas Edison. Movies take dramatic conflict and make it move. When you do that, it’s usually expressed onscreen as violent action.

Glenn Erickson’s included audio commentary track is spot-on and immensely informative. I have enjoyed Erickson’s DVD Savant columns for years; it’s nice to finely hear his voice. By the way, is it just me, or are commentary tracks in general getting better and better lately? The Russell Dyball commentary on Scream Factory’s recent Night of the Lepus Blu-ray is worth the price of the disc by itself. I tell you—it’s an embarrassment of riches! It makes me want to grab my REVOLVER and SHOOT UP a store that sells these older movies and TAKE ALL THE DISCS I want for FREE… ALL THE DISCS… FOR FREE, I SAY… SCOT-FREE! You’ll never take me alive, coppers! NEVER! 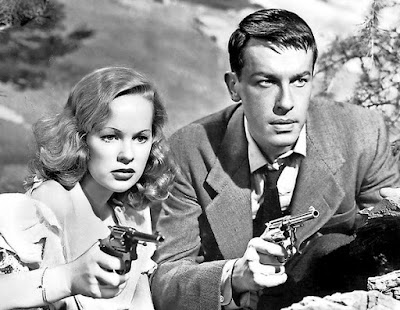 THRILLS: 100%
(Thrilling that Joseph Lewis and Company understand [minus the Production Code-mandated “just deserts”ending] the lure of irresponsibility and the pleasures of lawlessness.

SPILLS: 90%
(More—and more realistic—violence than in most run-of-the-mill period noirs.)