On this day devoted to Blaxploitation, why not go back to the “Big Bang” film that started the entire genre?

I am happy that Vinegar Syndrome has released what I am sure will be the definitive restoration of Melvin Van Peebles’s controversial, revelatory film Sweet Sweetback’s Baadasssss Song on Blu-ray disc just last week. I know it looks and sounds better than my old Criterion Collection laserdisc from the 1990s. 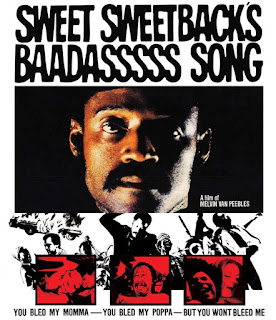 It is rare to see a work of art that moves you to redefine art. This film is crude, hallucinatory, angry, funny, and in your face. It deals with the African-American experience in contemporary America and though the film was released in 1971, all evidence suggests that not much has changed in more than 45 years. The film has a unique look, editing style, and soundtrack unlike anything I am guessing any of my readers have experienced. The film is going for tone over text, message over narrative, effect over standard Hollywood style. I find that 98% of Hollywood films bend over backwards to curry the favor of White America. It was refreshing to see an American film by a maverick director that frankly doesn’t give a shit what white people think about it.

The Plot in Brief: Sweetback (Melvin Van Peebles) is a sex worker whose boss volunteers him to be arrested by two New York cops one night. The police officers are being pressured by their boss to arrest more black men, and they assure Sweetback that his arrest is just for show and that he will be released soon. Cuffed in the back seat and on his way to the police station, Sweetback witnesses the officers commit an appalling act of police brutality. Sweetback beats both officers badly and flees the scene. The rest of the film concerns Sweetback’s desperate, fractured flight to the Mexico border, chased by police officers the entire way. A title card informs the audience that one day, a black man will be returning “to collect some dues.” 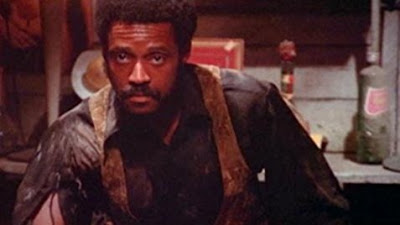 Van Peebles composed the score for the film, which is performed by Earth, Wind, & Fire. Lacking funds for advertising, Van Peebles released the soundtrack album ahead of the film, hoping that if it were popular, it would convince people to see his movie. The soundtrack is a work of art on its own: a surrealistic pastiche of funk, pop, chanting, and gospel. The score for the film plays like a broken opera, with motifs and passages that repeat, change, and repeat again. At times it almost seems as if the film itself is merely an image track created to accompany the music.

Melvin Van Peebles says something illuminating in one of the interviews included as a supplement on the new Vinegar Syndrome disc. At the 5th Annual Black Panther Film Festival in New York, he tells a rapt audience that when it comes to art, there are no rules. Rules in the world of art, he explains, are just ways for the art establishment to keep young artists down. He didn’t have any money, so he made his film for no money. He couldn’t convince established film people to come work with him, so he did the whole thing himself, writing, directing, editing, and starring as the title character. Someone in the crowd encourages him to say it again, so Van Peebles practically shouts, “There are no rules.” 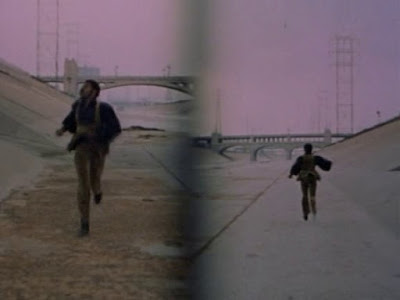 It’s interesting that in light of Sweetback’s success (produced for $150,000, it grossed over $15 million) Warners Brothers took a film that was already in preproduction, changed the protagonist to a black man, cast Richard Roundtree in the lead, and filmed Shaft. Shaft has some of the spirit and tone of Sweetback, but the message has been considerably diluted. Shaft is a police officer, not an outlaw; I am assuming that 1970s audiences found it easier to identify with a rogue cop, rather than a rogue cop killer.

Melvin Van Peebles’s son Mario, who appears in Sweetback, later directed and starred in a film about the making of it, the 2004 Baadasssss! That film is terrific too and deals not just with the obvious love and respect Mario has for his Dad, but also issues regarding an artist’s responsibility to his children and family. It makes the ideal second feature… if you plan to screen Sweetback tonight. 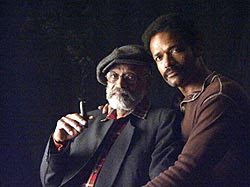 CHILLS: 100%
(The portrayal of the black experience in America is chilling.)

SPILLS: 100%
(The movie’s violence is portrayed very realistically—that is to say, not like “movie violence,” but how violence truly is: small and ugly.)