Seventies Eurocrime at its best.

Discovering and delving into the deep history of Italian cinema has been one of my greatest joys as a movie fan. From peplum to spaghetti westerns, gothic horror to Eurocrime, there are hundreds of films that simply weren’t on my radar for a very long time. Part of this is because many of these movies didn’t (and still don’t, in many cases) have distribution deals in the United States, but that’s changing. With those changes comes the opportunity to see many movies that simply go beyond my wildest expectations. Italian filmmaking, especially during the sixties and seventies, combines pop elements with gritty storytelling to make something unique and stylistically striking.

A perfect example of this is 1976’s The Big Racket, aka Il Grande Racket, a film that ticks off all the boxes of both Euro-crime as well as seventies cop drama. The film depicts a crime-ridden Rome where gangs terrorize the streets and shake down the local businesses, extorting family-run shops for money they can’t afford to pay. Italian actor and stuntman Fabio Testi stars as Inspector Palmieri, a prototype for the cop who cares TOO much about his job and is willing to do anything to get results. When his superior officer takes him off a gang-related case, he goes rogue, assembling a team of men who have all suffered great loss at the hands of Rome’s criminal element. 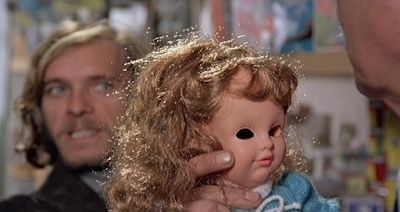 It sounds like every '80s cop movie you’ve ever seen, and it’s hard not to watch the movie without expecting someone to tell our lead character that he’s a loose cannon. In concept, this is the kind of movie Van Damme and Stallone were born to play. But in execution, the movie feels way different from the Lethal Weapon cop action model, owing far more to 1974’s Death Wish. All the hallmarks of Euro-crime are here: extreme violence, corrupt city officials, rampant crime, and a feeling of helplessness by the population that drives them to mob justice.

Let me be clear: this movie is CRAZY. The opening credits set the tone for what we’re about to see as a gang terrorizes a city street at night. They break windows, throw Molotov cocktails at cars, and generally just blow stuff up. All this is done to super-cool seventies music and becomes a spectacle that is absolutely riveting. Just a few minutes into the film, our heroic cop character follows these hoodlums to a hilltop meeting place where he is discovered and attacked in his car. The gang rocks his vehicle back and forth and uses their combined strength to tumble it down the hill. This would be impressive enough to watch from an outside perspective, but the film actually has a camera mounted INSIDE the flipping vehicle where we watch Fabio Testi actually experience the stunt in real life. As rocks and glass shower into the car and then back out again with every flip, it becomes apparent that we’re witnessing something amazing. Horrible, but amazing. 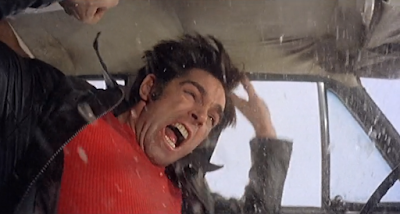 One of things I’ve been both surprised and discouraged by as I revisit the movies of 1976 is how relevant many of the social issues still remain, and The Big Racket is no exception. While I can’t necessarily directly relate to Italian politics, I do recognize that all forms of government seem plagued by greed and self-interest. In my own state, two of our last three governors were deposed with charges of corruption. Furthermore, a big theme of the movie is social helplessness, as everyday citizens feel as if they’re invisible to those who are supposed to protect them. There’s even a scene where the film’s gang incites a riot by accusing innocent people of criminal acts on the street. Their victims protest, but truth doesn’t matter. The accusation is enough to incite violence because the people feel so angry and powerless. Lives are lost or ruined because of rumors and falsehood.

All of this might be too heavy to handle if it wasn’t wrapped in layers upon layers of style. Luckily, this movie is oozing with charisma and visual panache. The cinematographer, Marcello Masciocchi (Yor, the Hunter From the Future) frames everything with the style of a comic book, frequently giving us slow-motion inserts of cool things like people being run down by cars or vehicles exploding into fireballs. The film was directed by Enzo G. Castellari, a man responsible for a ton of cool movies. In the sixties, he brought us memorable spaghetti westerns, including Any Gun Can Play, and in the eighties he made a bunch of cool post-apocalyptic films like Warriors of the Wasteland with Fred Williamson. He even made a Sinbad movie with TV’s Incredible Hulk, Lou Ferrigno. Sandwiched between those two decades is Castellari’s Euro-crime work, which shows how much of a holdover these movies really are from spaghetti westerns. 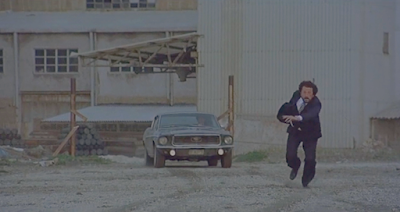 Replace horses with cars, sheriffs with police captains, horse thieves with street toughs, and it becomes apparent that Euro-crime movies are really just spaghetti westerns in disguise. The themes are often the same, albeit occasionally with more noble leads. The structure of The Big Racket isn’t all that different from the many iconic Italian westerns. Things are looking bad for the local population until a stranger appears. This stranger doesn’t play by any set of rules other than his own, but he’s got a code that he lives by. This code puts him at odds with the social power structure, so he decides he has to bring that structure down, thus restoring the power to the people and not corrupt leaders. There is a massive gun battle at the end of the movie, followed by a one-on-one duel with the film’s villain, whose identity is a secret until the last possible moment. The setting is different, but we’re still dealing with the same structures. 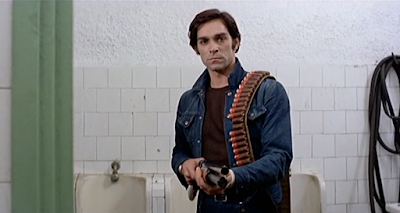 There’s not all that much left to say about The Big Racket. It’s not a complicated movie, but it sure is a compelling one. It can also be tough to watch, with graphic violence and several rape scenes that the director (probably rightfully) chooses to depict in all of their horror. While the movie does approach a lot of its subject matter with pop sensibilities, it isn’t afraid to make us very uncomfortable while doing so. There are a lot of elements that tap into what was happening in Italy at the time, and the film seems determined to offer both an analysis of Roman corruption as well as provide relief at the same time. You can see the influence of Euro-crime in the works of Hollywood directors today, and it’s for good reason. These movies aren’t afraid to stare directly into the face of darkness, but they do it with style. The Big Racket is a shining example of the genre.

Email ThisBlogThis!Share to TwitterShare to FacebookShare to Pinterest
Labels: 1976 movies, back to 1976, cop movies, eurocrime, fabio testi, the big racket