Get your non-scary movies while you still can. 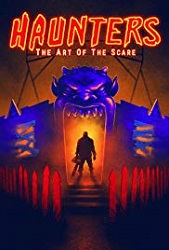 Haunters: The Art of the Scare (2018, dir. Jon Schnitzer) I was turned onto this documentary by the latest episode of Shock Waves, which featured an extended interview with the film's director, Jon Schnitzer. What begins as a look at various "extreme haunts" (a thing I will never, ever do) eventually focuses in on two specific haunts, one of which is the notorious McKamey Manor, considered the most extreme haunt in the country. That place can never stop fucking off, and watching it become more intense and ugly and downright fucking criminal over the course of the movie is fascinating and very upsetting. This is the movie you want to watch before checking out Anthony DiBlasi's Extremity, out Oct. 2 from Dread Central Presents. (Watch on Netflix) 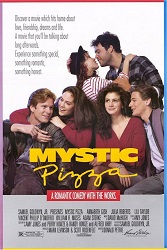 Mystic Pizza (1988, dir. Donald Petrie) The internet changed this week with Adam and Rob's review of Little Italy, the latest pizza-themed romantic comedy from director Donald Petrie. Now you can see where it all began by checking out his first pizza-themed romantic comedy -- his Mean Streets, if you will. Annabeth Gish, Julia Roberts, and Lili Taylor as three waitresses at a famous pizza place in Connecticut. Outside of the casting as Gish and Roberts as Portuguese, this movie is a goddamn delight -- a great sense of place, just enough romantic drama to hold our interest, and incredibly winning performances top to bottom. This is a movie I can watch any time. (Watch free with ads on Vudu) 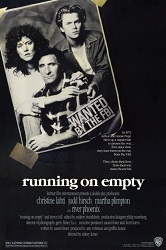 Running on Empty (1988, dir. Sidney Lumet) If you heard our recent podcast on Underrated 1988 movies, you heard Brian Saur pick this drama starring River Phoenix as the teenage son of former hippies Judd Hirsch and Christine Lahti, who have lived in hiding for years after committing an act of domestic terrorism. Like many Sidney Lumet movies, this one is beautifully acted and, at times, emotionally shattering. Thankfully, some of the heaviness is offset by a very sweet young romance between Phoenix and Martha Plimpton, who is always the best. This movie is so good. (Watch on FilmStruck) 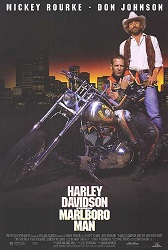 Harley Davidson and the Marlboro Man (1991, dir. Simon Winder) Here's a movie for which my affection can't really be defended. An openly miserable Mickey Rourke plays a biker and Don Johnson plays a cowboy, all of which is enough to sell me on the film. Put them in the not-too-distant future playing buddies who have to fight for their lives after a heist gone wrong and you've got this goofy, stupid, entertaining, and totally fun movie that I've seen more times than an adult man should admit. Oh, and it's directed by Simon Wincer, the underrated Australian filmmaker also responsible for gems like The Phantom and Quigley Down Under. And it's got Chelsea Field! This is very, very important. (Watch on Amazon Prime video)
Posted by Patrick Bromley at 5:00 AM