A Movie I'm Thankful For: MULAN 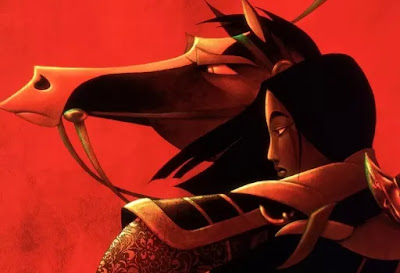 “...but I’ll bet that when it blooms, it will be the most beautiful of all.”

Having been born in the mid '90s, my upbringing was brimming with every princess and talking animal that the cinematic monolith known as Disney had to offer. Disney was already in the midst of what has been called the "Disney Renaissance" by that time, starting with 1989’s The Little Mermaid, and going on to bestow the world with beloved animated films like The Lion King, Beauty and the Beast, and Aladdin over the next 11 years. One would think that after so much time, the studio would have run out of ways to reinvent their princess formula, as she can only be motivated by some prince so many times. Enter Mulan in 1998, which is a film as pivotal to Disney’s oeuvre as it is on my journey towards empowerment (while also firmly taking its place as my favorite Disney movie of all time). Besides oozing with girl power and embracing queerness, Mulan has also taught me the power in taking my time to bloom — a lesson for which I am grateful today. 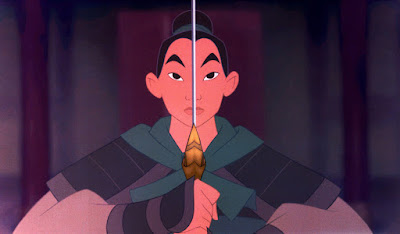 Watching it for the first when I was six a few years after its release, I was obviously unable to fully understand Mulan’s evidently feminist and queer themes. I only knew what I saw, which was an incredibly badass woman I wanted to grow up to be like. Mulan, unable to meet the standards expected of her as a woman in Sixth century China, feels as though she is failing her family when a matchmaker tells her she will never be suitable for a man. Her disabled father is required to enroll in the army to protect China against a Hun invasion, but Mulan disguises herself as a man in order to be able to save her father. Despite risking her life if she were to be discovered, Mulan is able to meet and even surpass the expectations that are placed on her as a man, and ultimately saves China single-handedly.

For six-year-old Alejandra, that was a relatively straightforward story that I reenacted every day for weeks. Although the reenactments have stopped, 24-year old Alejandra realizes and appreciates just how much there is to unpack in those 88 minutes. It’s nothing that hasn’t been said before, but I truly believe that Mulan is a queer feminist masterpiece. Mulan’s performance of gender, both when she acts the way she is told a woman should be (“men want girls with good taste” ...you know the song) and when she acts the way she is told a man should be (“swift as the coursing river”), is really powerful stuff for 1990s Disney. What’s even more powerful is how Mulan can succeed in such an exaggerated way when she performs as a man, able to accomplish tasks like retrieving an arrow that none of the other “real” men are able to retrieve, basically rendering gender expectations obsolete.

The most lasting impression Mulan made on me was later in a reprise of the arrow retrieval scene, where her male friends are only able to succeed in climbing a pillar by embracing their femininity, represented by donning kimonos and a full face of makeup. This wasn’t only a movie for empowering little girls, but I admire that boys could watch this and learn that embracing qualities deemed as feminine could be a healthy, remarkable thing. I can’t fully explain what these scenes did for my understanding that as a woman I am capable of the great things any man can do, but I am eternally grateful that I was able to learn that at such a young age because of Mulan. 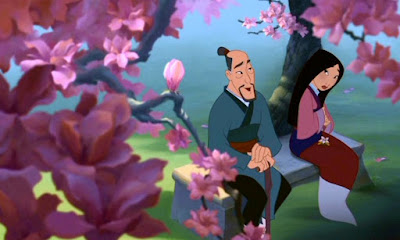 But still, Mulan continues to teach me new great lessons even today. I decided to revisit the film in preparation for a trip to Disney World in celebration of my 24th birthday, a very sensible and not at all weird thing for a grown ass woman to do. In a scene where she feels she has dishonored her family after her failed appointment with the matchmaker, Mulan sits with her father under a cherry blossom tree that is in full bloom. Noticing that there is still one flower yet to blossom, he tells Mulan something that I also (desperately) needed to hear — “Look! This one’s late. But I’ll bet that when it blooms, it will be the most beautiful of all.” Many of my worst days happen when I start to think about how “far behind” I feel comparing my accomplishments to those around me. We were always told that by this age, we should be graduated and starting our careers or even settling down and starting a family. I know that sounds crazy, but it’s happening all around me, and much like Mulan, I feel like I’m either incapable of succeeding or that I am doing something wrong. Mulan reminds me that my ability to meet those expectations does not make me who I am, and that I can still accomplish amazing things even if I do them at my own pace. 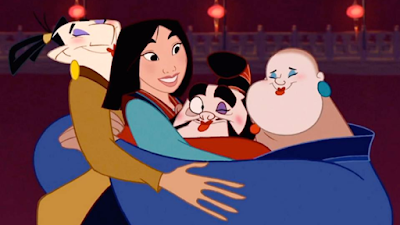 Two decades after its release, Mulan remains one of the most relevant and important movies to come out of the Disney Renaissance. Thinking about the ways Mulan and movies like it helped influence a generation of strong and empowered women can sometimes be overwhelming, but I think it says things that are especially important today. Besides the valuable things it has to say about women and gender, I think the film offers so many other lessons that will resonate with people of all ages. This week, I am particularly grateful for the various comforts I found in Mulan — a different lesson for every stage of my life.