Whenever I want to, all I have to do is stream. 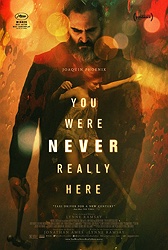 You Were Never Really Here (2018, dir. Lynn Ramsey) One of my favorite movies of the year is now available to stream on Amazon. Joaquin Phoenix stars as a killer taking out bad guys in Lynn Ramsey's incredible meditation on violence, loneliness, rage, and so much more. This is a brutal movie even though much of the bloodshed takes place off screen, and there are scenes and moments in it with which I find myself identifying more than most other movies this year. It's going to take a few years, but I suspect You Were Never Really Here is going to be an all-timer.  (Watch on Amazon Prime Video) 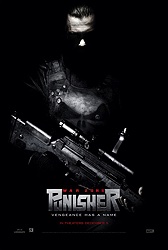 Punisher: War Zone (2008, dir. Lexi Alexander) I got this one wrong when I first caught it on DVD in 2009. I thought it was cartoonish and stupid, thus proving I completely missed the point that it is those things on purpose. Now it's one of my favorite comic book movies of the first decade of the 2000s: gorgeously designed and photographed, incredibly funny, and among the most violent American action films ever made. Director Lexi Alexander totally leans into how thin and goofy the source material is and makes a movie that feels just like that. I'm never going to be crazy about the way any of the characters are played (Ray Stevenson looks the part but is a bore, and I'm not sure what Dominic West is doing [I wish Alexander had been allowed to cast Freddie Prinze Jr., who she still says gave the best audition]), but that doesn't matter. A guy does parkour and gets blown up with a rocket launcher while jumping across a building and it will never not be the funniest thing I've ever seen. (Watch on Netflix) 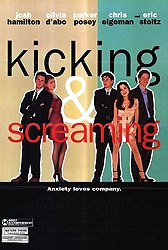 Kicking and Screaming (1995, dir. Noah Baumbach) I'm guessing Noah Baumbach's first movie doesn't hold up all that well in 2018, because it's a movie that's very, very much of its period. This is probably my favorite of the mid-'90s "young people standing around pondering their relationships and futures" subgenre. The dialogue is sharp, the performances funny. It's still, for my money, Noah Baumbach's best movie this side of The Squid and the Whale. Criterion put it out on DVD a few years back, but I'm still waiting on a Blu-ray. (Watch on Hulu) 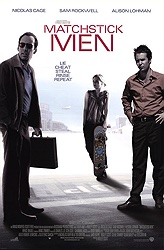 Matchstick Men (2003, dir. Ridley Scott) 2018 is the year it has become cool to like Nicolas Cage again thanks to his performance in Mandy, making it the perfect time to revisit one of his most underrated performances in one of Ridley Scott's most underrated movies. He plays an obsessive compulsive con artist (and partner of Sam Rockwell) who discovers he has a daughter he never knew about, played by Adam and Rob's BFF Alison Lohman. This is the kind of mid-budget adult drama that Hollywood forgets how to make except for around awards season. Because it's neither a genre film nor a big epic, people tend to forget that Ridley Scott directed it. That's a bummer, because it's a reminder of how versatile he can be and how well he can service the right material when he's got it. (Watch free with ads on Vudu)
Posted by Patrick Bromley at 5:00 AM