Weird on Top: A Discussion of David Lynch

by Alejandra Gonzalez and Rob DiCristino 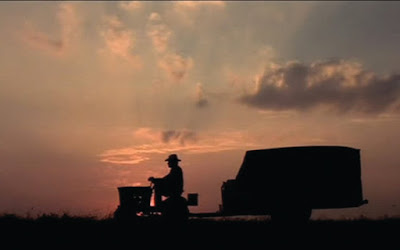 Rob: Buckle your holy shit belts, cats and kittens, because this week we’re covering a true oddity: A David Lynch film released by Walt Disney Pictures, rated G by the MPAA, and featuring not a single dream sequence, fugue state, or mind fuck. It’s 1999’s The Straight Story, an easygoing road picture based on the real-life tale of Alvin Straight’s unconventional family reunion. When he learns that his estranged brother Lyle (the immortal Harry Dean Stanton) has suffered a stroke, Straight (Richard Farnsworth) — whose own deteriorating physical condition prevents him from driving a car or walking without a pair of canes – resolves to make the five-week journey to Lyle’s front porch onboard a thirty year-old John Deere lawn tractor. Because be can. Because America. 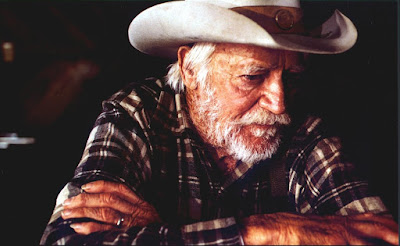 Though he leaves his daughter Rose (Sissy Spacek) behind, Straight’s expedition from Laurens, Iowa to Mt. Zion, Wisconsin will have him crossing paths with all manner of drifters, vagrants, hucksters, tokers, smokers, and children of God. He’ll share his fire and his wisdom, leaving passers-by in awe of the man on the tiny green lawnmower. Above all, he’ll hope to see Lyle again, hope that one look into his brother’s eyes can atone for ten years of distance, resentment, and regret. The Straight Story was lauded as a departure for Lynch, more accessible and sympathetic than any previous (or subsequent) offering. However, its linear narrative and folksy charm don’t stop the surrealist Lynch from including a few of his favorite signifiers. But we’ll get to that in a minute.

I’d seen The Straight Story once or twice back when I first got into Lynch in the mid-2000s, but I have to admit that I didn’t give it a ton of thought at that time. I figured it was a fluke or a money job, something inconsequential and irrelevant to the total body of his work. Boy, was I wrong. Revisiting The Straight Story in the context of this series (and after years of digesting Lynch in a more nuanced way than I was able to previously) has really allowed me to see just how much it speaks to his soul as a filmmaker and what he’s trying to accomplish through the medium. It’s just a beautiful, beautiful movie. While I disagree with critics who argue that Lynch’s other work isn’t “human” or “sensitive” — I think we both consider him one of our most romantic, delicate, and compassionate storytellers — I can honestly see why a critic like Roger Ebert would savage Blue Velvet and Wild at Heart but give The Straight Story a perfect four-star review. The movie, writes Ebert in that same review, is not Lynch’s usual brand of ethereal, abstract, or inscrutable. Instead, it “finds poetry and truth in the exact choice of the right everyday word.” It’s a quiet, thoughtful masterpiece.

Ale, what are your thoughts on The Straight Story?

Alejandra: I’ll be totally honest and confess that I was not looking forward to revisiting this one because I remember watching it when I was much younger and finding it to be extremely boring. I know in our first week with the column I mentioned that The Alphabet was my first time with Lynch, but come to think of it, I saw The Straight Story way before I even knew who David Lynch was when I was about nine or ten. Discovering later that the film was directed by him was pretty shocking, and I never understood or bothered to revisit it until now. I am so glad that I had to, because I absolutely loved it this time around. I kept thinking about you when I was watching because we often mention that a lot of the most peculiar Lynch movies actually tell a pretty conventional story with a million additional surreal layers. The Straight Story is a perfect title, because this is arguably the most straightforward story Lynch has told on screen, having many of its themes overlap with Lynch’s other movies, but (almost) completely missing the surrealist elements we’d expect in his work. Actually, I don’t want to use the word “missing,” because the connotation would imply that the film is lacking in some way. On the contrary, The Straight Story feels like Lynch’s most complete work. Even more so, the entire premise is pretty surreal in and of itself. I know it’s based on a true story, but watching an old man embark on a long road trip riding a lawnmower produces such bizarre imagery that it does end up feeling a little surreal.

Not to mention that this thing is bursting with Lynch trademarks everywhere you look. I especially see Lynch in the eccentric characters that Alvin meets on his journey. There’s the shop owner with a peculiar attachment to a mechanical grabber in his store, a woman in hysterics about her love of deer and how she can’t stop killing them, and the quirky pair of twin mechanics, to name a few. There are also some scenes I keep thinking about because they should feel out of place in a story like this, but don’t. The scene, for instance, where Rose and Alvin are just watching a thunderstorm through their window. It’s made pretty clear that this is something they do often, but the image of them sitting in silence watching the rain definitely feels dreamy, like something we’d find in Twin Peaks. There’s also the scene where Rose looks out her window at a ball that rolls into frame. The shot lingers on the ball for a long time until a little boy follows it and takes it with him. I felt totally uneasy for the time the camera was focused on the ball and was waiting for something bananas to happen. Nothing did, which was the most bananas thing of all.

Besides those specific instances, there are just many Lynchian signifiers sprinkled through the film. One that I found to be particularly funny was the shots of road, which I feel confident that Lynch has included at least once in every major work of his. What makes these shots pretty hilarious in The Straight Story is how slow that shot moves compared to the swiftness of the same kind of shot in Lost Highway or even parts of Twin Peaks: The Return. I mean, I get that obviously a lawn mower will be significantly slower than a car, but Lynch’s absolute commitment to his signature shot despite that made me laugh. Did you see any you wanted to talk about?

Rob: Oh man, what about when Alvin takes a shotgun to his first tractor? What about the scene with the firefighters where that burning house is just hanging out in the middle of everything? Or the braunschweiger! So much braunschweiger! Even Rose’s stutter feels like a specific choice meant to evoke Lynch’s familiar motif of “offbeat” modes of communication. I know Lynch didn’t write The Straight Story (that was John Roach and longtime Lynch collaborator Mary Sweeney), but there’s one exchange aside from the few you mentioned that felt particularly Lynchian: It’s when the John Deere salesman (Big Ed Hurley himself, Everett McGill) is showing Alvin the mower that he’ll eventually buy. Alvin asks, “Is it a good machine?” The salesman responds, “It’s a good machine, Alvin.” There’s something so beautiful about that moment that I can’t put my finger on. It’s like a password, a contract between two men from a bygone era (era) where your word was your bond. This doubles down in the movie’s final simple, striking, moment between Alvin and Lyle.

Along these lines, I was reading through the screenplay and noticing how much wordier it is than the finished product. It’s not uncommon for screenplays to be condensed and simplified on set, of course, or for actors and directors to figure out how to convey something visually rather than verbally, but I think this gives us even more to appreciate about Lynch. For all our talk about how abstract he is, Lynch is actually very particular about the words his characters use and the space that exists between them (I’m thinking about Mulholland Dr. or some scenes from Twin Peaks: The Return). So while, again, I know he didn’t write the screenplay, I can still feel Lynch’s fingerprints all over it. 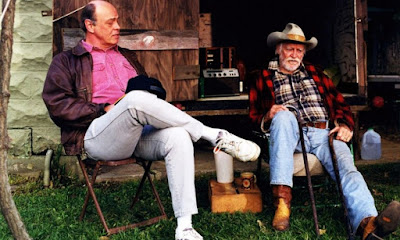 Alejandra: Which is interesting, because in an interview Lynch said that the reason he took this on was because he fell in love with the script. I love that even though he was fond of it, he still made it more “him.”

Rob: One of the other things that really stood out to me was the way The Straight Story handles aged men and their masculinity, especially when Alvin confesses to his haunting wartime mistake or his unresolved conflict with his brother. They’re genuinely heartbreaking moments of deep emotional vulnerability. They’re unapologetically raw and never compromise Alvin’s status as the movie’s moral center. I kept thinking about how differently those moments would play if directed by, say, Clint Eastwood. Alvin (played by Eastwood, of course) would still have that gruff withdrawal, but it would play much more severe. Whereas Farnsworth emotes beautifully through his eyes and ever-shifting jawline, Eastwood would grit everything out through his teeth. This might work for some audiences, but it would play more as a man resisting his interiority than exploring it. That’s not a bad thing, I guess, but I love the choices Farnsworth makes and the angles from which Lynch approaches them.

Alejandra: It’s awesome that you mention age and what it means in The Straight Story, because I kept thinking about how Lynch is never afraid to make things that aren’t only about attractive young people. I kept thinking about Twin Peaks: The Return because, while much younger than Alvin, the characters there have (obviously) aged since the last time we saw them and are sometimes seen reflecting on their past. It reminded me of the line Alvin utters when he is asked what the worst part of being old is — “The worst part of being old is remembering when you were young.” Researching a bit before watching the movie, I learned that Farnsworth committed suicide because of his struggle with cancer only a year after this movie came out. I really couldn’t shake that as I was watching, and it seemed to me like Farnsworth felt every bit of this role authentically. Also, I really miss Harry Dean Stanton. 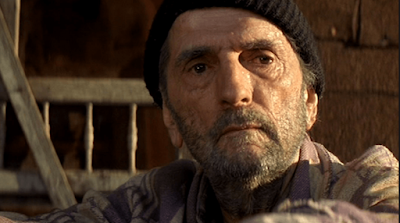 I do want to say I loved every performance in this, even the shorter ones from people Alvin meets on his journey. It was easy for me to feel about those characters the way Alvin probably did. I felt empathy for the runaway, I felt concerned about the woman who hit the deer, and even in that scene where Alvin shares his WWII experience with the other veteran, I felt that solidarity between them. I think it takes good writing and direction to be able to instill feelings in the viewer that emulate what the characters are feeling, and The Straight Story does that almost effortlessly. All of that being said, anyone put off by watching this because it might not be the most “Lynch” Lynch should absolutely try it at least once. I promise that you’ll find him there even if you’re not looking for it.

Rob: I totally agree. This was great! We’ll meet back here in a few weeks to talk about Twin Peaks: Fire Walk with Me. Until then, remember: This world is wild at heart…

Alejandra: And weird on top.
Posted by Patrick Bromley at 5:00 AM