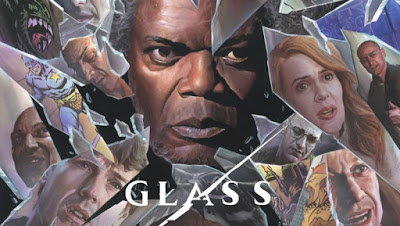 I’m going to try something different with this review.

The first part will be a brief non-spoiler review of Glass, followed by a “Good/Bad/Ugly” section that will have spoilers. I don’t want to spoil anything about the movie for those who haven’t seen it, but I would feel like I’m talking about the movie in half-measure if I reviewed it without spoilers. Both sections will be clearly marked in this review. With that out of the way…

Glass was not the movie I was expecting as the finale to the Unbreakable trilogy. Expectations aside, I liked Glass quite a bit (I’ve seen it twice) and I look forward to future viewings where I watch Unbreakable (one of my three favorite superhero movies ever), Split (which I’ve grown to appreciate after a second viewing), and Glass all in a row. Glass makes some head-scratching choices and I can easily understand why anyone (M. Night Shyamalan fan or not) would be disappointed, thinks it ruins what came before, it or feels it’s just outright bad. 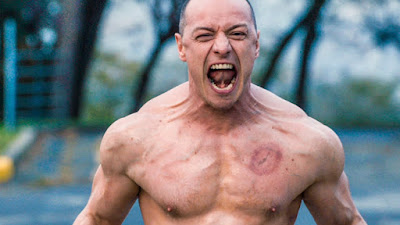 For me, as a fan of the filmmaker, I felt rewarded and I think it’s a mostly satisfying entry in his filmography. I am also just happy to have M. Night Shyamalan movies. I saw Glass the first time with friends from F This Movie!, and my first reaction to the film was that I just like Shyamalan’s voice even if I don’t love all the lyrics. His movies (most of them) “sound” good to me. I’m also happy he’s still very much doing his own thing. Glass is anything but basic, and his take on superheroes feels specific and authorial. The performances in the film have a wide range. Faring best are James McAvoy and Samuel L. Jackson, who have created villains of impressive depth over the course of their respective two films in this trilogy. Bruce Willis is better here than in his direct-to-video fare of late, but his lack of energy goes past a character choice and hinders what has become for me (thanks in large part to his performance in Unbreakable) a character I love. I am a huge fan of the David Dunn character and the success of him in Glass is more due to the writing than Willis’s performance which is a bummer. Sarah Paulson and Anya Taylor-Joy give the performances required of them, but the writing lets them down. The Paulson character is a bit impossible to make enjoyable. She’s the William Atherton of Glass.

Before I get into the spoiler section, here’s my take: If you have any interest in the movie, see it. If you like most Shyamalan movies, you’ll probably like this one. If you have never liked his movies, you won’t start to with Glass.

Okay, now for the spoiler section. 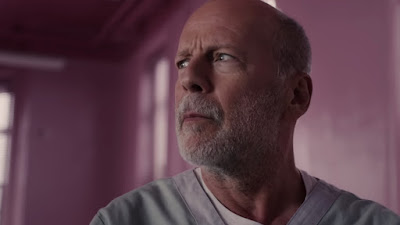 • The re-introduction to David Dunn is awesome. I love that he’s very much a crime-fighting duo with his now-grown son, Joseph (Spencer Treat Clark). It’s a nice reveal since their dynamic was so crucial to the heart of Unbreakable.

• I was happy Glass left Casey (Anya-Taylor Joy) in a foster home and didn’t make her go through with returning to her abusive uncle from Split. When I saw Split, I was really turned off by where the movie left her so to see that play out to the character’s benefit made me happy.

• The M. Night Shyamalan cameo is hilarious. It’s so charmingly bizarre how he’s like “Yep. I’m the same guy from Unbreakable, but in the ensuing 18 years, I’ve turned my life around and I’m doing great.”

• The interplay between James McAvoy and Samuel L. Jackson liven up the proceedings after a stretch where the movie has slack pacing. I liked their villain team-up quite a bit.

• I like the misdirect where I didn’t know I was watching the climax of the movie (the parking lot fight) until well into the climax. I was expecting it to be a smaller battle before an Aliens-style second climax in the Osaka Tower. It’s cool to me that Shyamalan wants to keep this universe small and modest.

• The reveal of how Elijah/Mr. Glass plays into Kevin/The Beast’s family history and more so Kevin’s reaction to it was satisfying. I also thought the wrap up for their characters was handled well unlike David Dunn, but we’ll get to that later.

• Glass has a lot of ideas and doesn’t stick to any single one for very long. But for however long the movie covers them I found the themes often fascinating. Here are three I picked up (this is all subjective of course...I’m not sure the movie is saying these for sure): 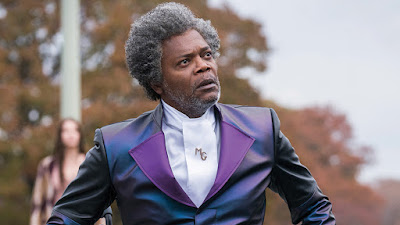 • The pacing really stalls between when McAvoy and Willis are admitted into the psychiatric hospital and when Samuel L. Jackson becomes a more active participant in the movie. On a weird meta-level, Sarah Paulson’s character (Dr. Staple) is preventing the audience from seeing the movie they want to see (where these three men interact more with each other) as much as she’s trying to convince them they are not supernatural.

• The dialogue and line delivery at times is laughable. E.G. “Have you ever seen very good magicians?” or “Have you ever been to a comic book convention?” etc. Elijah Price’s mom (Charlayne Woodward) has some others, too, calling out specific comic book tropes explicitly. Her old age makeup is not great either, though the actress’s performance is solid.

• David Dunn is well...done dirty by the end of Glass. This character has (I’m embarrassed to say) meant something to me over the years and to see that Shyamalan doesn’t really see him as a man anymore but mostly a martyr (to advance the cause of superheroes) is disappointing. Dunn’s death is sudden and muted when at the very least it should have had more heft. It’s disappointing to know I’ll have to watch Unbreakable and remember how his character ends up at the end Glass.

• The secret society that Paulson leads is handled poorly, especially that they all meet in restaurants where even the fucking bartender is on it.

• The last scene is another case (like The Matrix Revolutions) where I thought to myself “How did we end up here?” By that I mean, it’s a trilogy where the hero(es) are mostly dead and in the final moments we’re sitting on a bench with a bunch of supporting characters in whom we are less interested. The movie ends caring more about martyrs and legacy when it would be better served focused on the central characters. It’s like if Heat ended with Diane Venora and Amy Brenneman going to Cheesecake Factory to debrief. Also, how in the fuck do you expect me to believe that a serial killer’s kinda girlfriend, a terrorist’s mom and a hero’s dad are suddenly chummy even if they share a common bond? 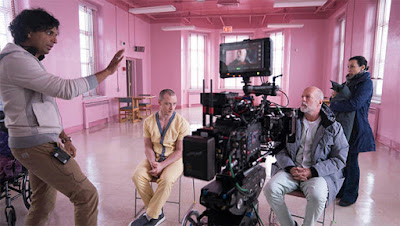 • Glass is tougher to defend when I think about how Shyamalan wants me to sympathize with a terrorist (“Mr. Glass”) and a serial killer (“The Horde”). I don’t want them to realize their potential if they must harm others to do it. I mean, that’s still a bad thing, right? The movie doesn’t need to moralize but also, they shouldn’t be on equal ground for audience sympathy as the hero (David Dunn). I think this is exacerbated in Glass because Sarah Paulson’s character is basically the biggest bad, like Brian Cox’s character was in X2: X-Men United. Her whole subplot complicates the Unbreakable series in some good ways, but also diminishes the arcs and interplay between the three main characters.

• Mrs. Price and Casey are basically enablers to the villains. Mrs. Price treats all the violence caused by Elijah like its collateral damage and Casey’s Beauty and the Beast thing with Kevin is weird considering he’s a serial killer who murders young girls. I get that he has benevolent personalities too, but, um...shouldn’t his actions outweigh his intent where she would at least want to stay away from him?

In closing, you can see I like many aspects of Glass and there are others that drive me crazy. All in all, I like the movie and see it as a fascinating entry in a trilogy I’ve grown very fond of over the years. It’s a property I get really dorky about which happens less often for me lately and I really love it when it occurs - warts and all. Back in the day, I used to go to the megaplex on opening night with my friends for the new blockbuster movie and we’d go to IHOP afterwards to discuss it. I wish Glass came out in 2003. It’s a great IHOP movie.

What did you think of Glass? Leave a comment below and mark SPOILER when spoiling.
Posted by Patrick Bromley at 5:00 AM