"I Can't Wait to Be You": Authenticity in EIGHTH GRADE 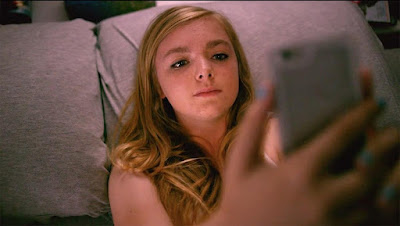 Bo Burnham’s Eighth Grade begins with a challenge: Be yourself. It’s not easy, says middle-schooler Kayla Day (Elsie Fisher) in the latest in a series of what she hopes are inspirational YouTube vlogs, but it’s possible. Have confidence! Put yourself out there! Sure, people might call you names or think you’re strange, but that’s okay! You don’t have to conform to their expectations, nor do you have to imitate their actions in order to feel whole. Evil people exist, she says, but we just have to ignore them. “If people like, talked to me and stuff, they’d find out that I’m, like, really funny and cool and talkative.” Her smile is bright. Her eyes are eager. Kayla is making us a solemn promise that, one day, we can be as confident and self-assured as she is. But then she signs off (“Gucci!”), closes her laptop, and drops the forced smile she’s been holding for two minutes. Reality. Burnham cuts to a wide shot of her room. Her backdrop is a bedsheet. Her studio lights are desk lamps. It’s all fake, constructed. More harsh reality. She sinks into darkness. 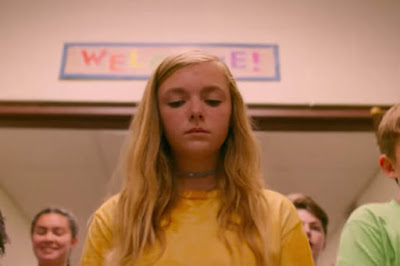 Because Kayla isn’t confident. She isn’t carefree or authentic. Like so many young people with a social media account, she’s performing for the camera. She’s projecting the outgoing and self-actualized version of herself that she can only hope to be, and she’s giving life advice for the same reason we all do: she’s trying to work out the best way to improve her own situation. Her video testimonials read like Catholic confessions, at times, as if she’s desperately pleading with the viewer for absolution. I’m doing everything right, she seems to say. Why can’t I talk to that boy? Why can’t I make a solid friend? With all human knowledge just a Google away, Kayla scours over Instagram and Snapchat for answers. What she doesn’t know, of course, and what Eighth Grade works so hard to remind us, is that there are no answers. Being thirteen is a goddamned clusterfuck of darkness and shame no matter who you are. Kayla shuffles from class to class, marveling at her peers’ ability to Be Themselves while failing to see how close each of them is to unraveling completely. 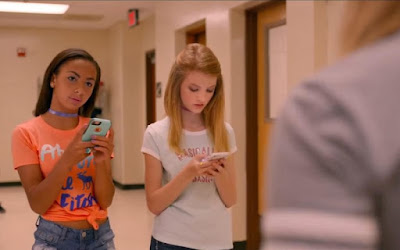 At least Kayla has high school shadow day, a chance to prepare a fresh and untarnished version of herself for Olivia (Emily Robinson), a bubbly 12th grader who accepts her with open arms. She doesn’t know the Real Kayla, the Everyday Kayla, the Work-In-Progress Kayla that her peers have spent the last eight years with. Olivia finds Kayla’s nervous stutter adorable; she’s not judgmental or intimidating. She’s scared, too! How funny is that? She patronizes Kayla, sure, but only because she’s seeing her own opportunity to show off. She’s a senior, a source of sage wisdom and a grizzled veteran of childhood’s Great War. Kayla doesn’t see Everyday Olivia, either. Stressed Olivia, Insecure Olivia. She can present an ideal version of herself, the one Eighth Grade Olivia may have admired. However, while Kayla might be in a rush to be Olivia, she’s not ready for the Rileys (Daniel Zolghadri) of the world, the predatory boys who try to pressure her into sex and then shame her for non-compliance. It’s the kind of evil that cuts through Kayla’s open heart like a dagger, the kind of evil she’ll need to build an immunity against over time. 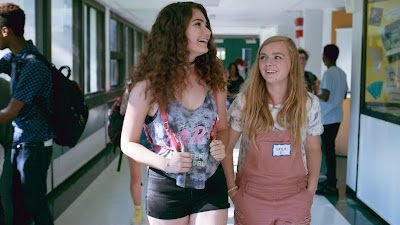 Which brings Kayla to her sixth grade time capsule, that judgmental little box of promises she made to herself two years ago. Packed inside a SpongeBob Squarepants thumb drive are the existential hopes of a more innocent time, and while adult audience members may scoff at Young Kayla’s excitement about the various boyfriends and middle school parties she was sure her future self would be navigating, Burnham treats Present Kayla’s failure to meet those expectations with weight and respect by shooting the moment of revelation in a tortured, disorienting close-up. It’s a hard moment, but it’s also a profound one. It’s what Joseph Campbell called the Meeting with the Goddess, the revelation of an emotional truth that the hero has lost along their journey. What have these last two years brought Kayla? What has she done since then? What tangible victories can she check off her list? In short: How different is she? Because for Kayla, authenticity is about change. Growth. Becoming something more, something better. It’s not until the fireside chat with Mark (Josh Hamilton) — her literal Atonement with the Father, if we’re sticking with Campbell — that she sees herself how he sees her, how she really is, how she always has been. How she’ll stay. 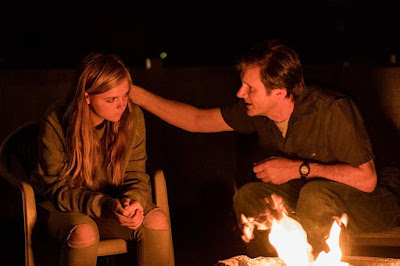 And that’s why Kayla’s last video is to herself. That’s why — fittingly dressed in her graduation cap and gown — Kayla tells off Mean Girl Kennedy (Catherine Oliviere) for being a shitty human being, for lacking the basic manners and consideration to say “thank you” every once in a while. For making Kayla feel Less Than. Ironic detachment isn’t charming, Kennedy. It doesn’t make you a grown-up. It’s not nice. Be nicer. That makes you a grown-up. That’s why she drops the act, the insincere “Gucci!” That’s why she joins the goofy and gawky Gabe (Jake Ryan) for a chicken nugget date. They talk archery camp, Rick & Morty. Dipping sauce. Kid’s stuff. “This is a good conversation, don’t you think?” Gabe asks. “Yeah, we’re doing some good talking,” Kayla responds. They are. It’s a good conversation. It’s not a race for likes or retweets. It’s not about superlatives or blowjobs or rushing to the next step. “I bet you probably look a lot different than me,” she tells her future self in her last video. “Or if you don’t, and you look, you know, mostly the same, that’s cool, too.” And it is. It’s very cool.